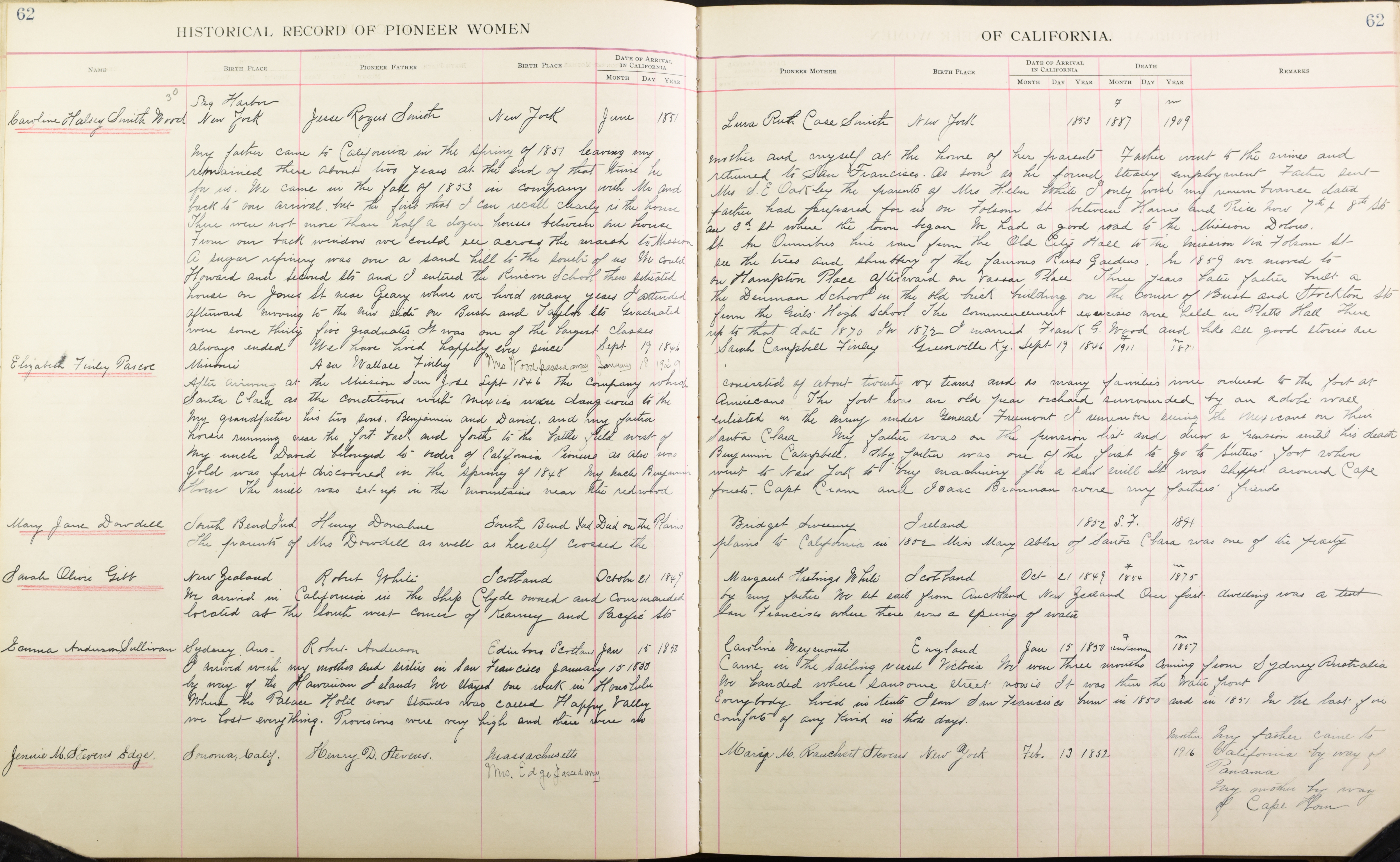 Remarks: My father came to California in the spring of 1851 leaving my mother and myself at the home of her parents. Father went to the mines and remained there about two years at the end of that time he returned to San Francisco. As soon as he found steady employment, Father sent for us. We came in the fall of 1853 in company with Mr. and Mrs. S.E. Oakley the parents of Mrs. Helen White. I only wish my remembrance dated back to our arrival, but the first that I can recall clearly is the house father had prepared for us on Folsom St. between arris and Price, now 7th & 8th Sts. There were not more than half a dozen houses between our house and 3d St. where the town began. We had a good road to the Mission Dolores. From our back window we could see across the marsh to Mission St. An Omnibus line ran the Old City Hall to the Mission via Folsom St. A sugar refinery was on a sand hill to the south of us. We could see the trees and shrubbery of the famous Russ Gardens.In 1859 we moved to Howard and Second Sts and I entered the Rincon School then situated on Hampton Place. Afterward on vassar Place. Three years later father built a house on Jones St. near Geary where we lived many years. I attended the Denman School in the old brick building on the corner of Bush and Stockton Sts. Afterward moving to the new side on Bush and Taylors Sts. Graduated from the Girls’ High School. The commencement exercises were held in Platts Hall. There were some thirty five graduates. It was one of the largest classes up to that date 1870. In 1872 I married Frank G. Wood and like all good stories are always ended. We have lived happily ever since.

Remarks: After arriving at the Mission San Jose Sept 1846 the company which consisted of about twenty ox teams and as many families were ordered to the fort at Santa Clara as the conditions with Mexico were dangerous to the Americans. The fort was an old pear orchard surrounded by an adobe wall. My grandfather his two sons, Benjamin and David, and my father enlisted in the army under General Fremont. I remember seeing the Mexicans on their horses running near the fort back and forth to the battle field west of Santa Clara. My father was on the pension list and drew a pension until his death. My uncle David belonged to order of California Pioneers as also was Benjamin Campbell. My father was one of the first to go to Sutters’ Fort when gold was first discovered i the spring of 1848. My uncle Benjamin went to New York to buy machinery for a saw mill. It was shipped around Cape Horn. The mill was set up in the mountains near the redwood forests. Capt. Cram and Isaac Brannan were my fathers’ friends.

Remarks: The parents of mrs. Dowdell as well as herself crossed the plains to California in 1852. Miss Mary Abler of Santa Clara was one of the party.

Remarks: I arrived with my mother and sisters in San Francisco January 15, 1850. Came in the sailing vessel Victoria. We were three months coming from Sydney Australia by way of the Hawaiian Islands. We stayed one week in Honolulu. We landed where Sansom Street now is. It was then the water front. Where the Palace Hotel now stands was called Happy Valley. Everybody lived in tents. I saw San Francisco burn in 1850 and in 1851. In the last fire we lost everything. Provisions were very high and there were no comforts of any kind in those days.

Remarks: My father came to California by way of Panama. My mother by way of Cape Horn.