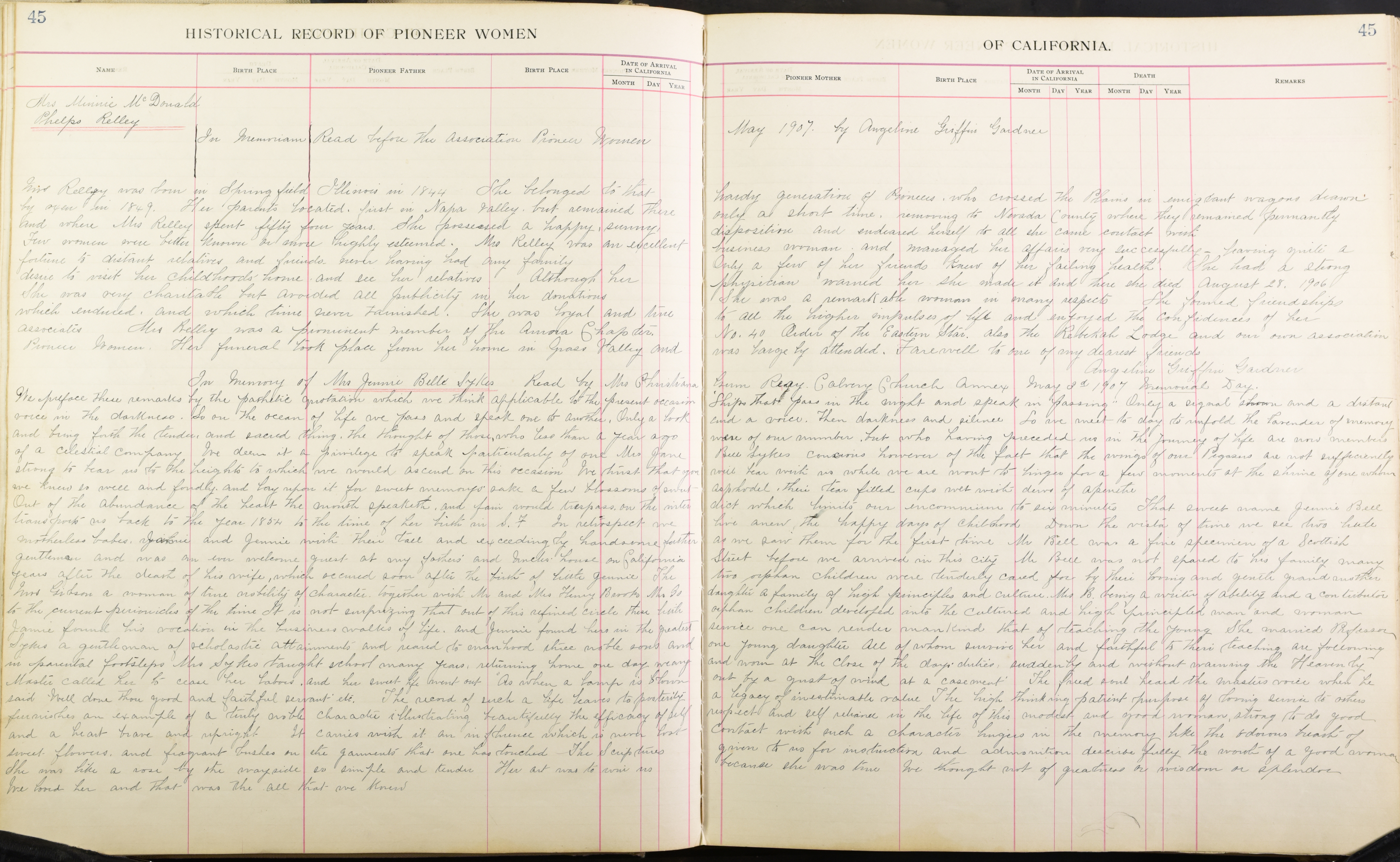 In memoriam. Read before the Association of Pioneer Women. May 1907 by Angeline Griffin Gardner.

Mrs. Relley was born in Springfield, Illinois in 1844. She belonged to that hardy generation of Pioneers who crossed the Plains in emigrant wagons drawn by oxen in 1849. Her parents located first in Napa Valley, but remained there only a short time, removing to Nevada County where they remained permanently and where Mrs. Relley spent fifty four years. She possessed a happy, sunny, disposition and endeared herself to all she came contact with. Few women were better known or were highly esteemed. Mrs. Relley was an excellent business woman and managed her affairs very successfully leaving quite a fortune to distant relatives and friends never having had any family. Only a few of her friends knew of her failing health. She had a strong desire to visit her childhoods’ home and see her relatives. Although her physician warned her  she made it and there she died August 28, 1906. She was very charitable, but avoided all publicity in her donations. She was a remarkable woman in many respects. She formed friendships which endured, and which time never tarnished. She was loyal and fine to all the higher impulses of life and enjoyed the confidences of her associates. Mrs. Relley was a prominent member of the Amora Chapter No. 40 Order of the Eastern Star also the Rebekah Lodge and our own association Pioneer Women. Her funeral took place from her home in Grass Valley and was largely attended. Farewell to one of my dearest friends. Augustine Griffin Gardner.

We preface these remarks by the pathetic quotation which we think applicable to the present occasion “Ships that pass in the night and speak in passing.” Only a signal shown and a distant voice in the darkness. So on the ocean of life we pass and speak one to another, only a look and a voice. Then darkness and silence. So we meet today to unfold the lavender of memory and bring forth the tender and sacred thing, the thought of those, who less than a year ago were our member, but who having preceded us in the journey of life one now members of a celestial company. We deem it a privilege to speak particularly of one Mrs. Jane Belle Sykes conscious however of the fact that the wings of our Pegasus are not sufficiently strong to bear us to the heights to which we would ascend on this occasion. We trust that you will hear with us while we are wont to linger for a few moments at the shrine of one whom we knew so well and fondly and lay upon it for sweet memory’s sake a few blossoms of sweet asphodel, their tear filled cups wet with dews of [illegible]. Out of the abundance of the heart the mouth speaketh, and fair would trespass on the interdict which limits our encomium to six minutes. That sweet name Jennie Bell transports us back to the year 1854  to the time of her birth in S. F. In retrospect we live anew the happy days of her childhood. Down the vista of time we see two little motherless babes, [illegible] and Jennie with their tall and exceedingly handsome father as we saw them for the first time. Mr. Bell was a fine specimen of a Scottish gentleman and was an even welcome guest at my father’s and uncle’s house on California Street before we arrived in this city. Mr. Bell was not spared to his family many years after the death of his wife, which occurred soon after the birth of little Jennie. The two orphan children were tenderly cared for by their loving and gentle grandmother Mrs. Gibson a woman of true nobility of character, together with Mr. and Mrs. Henry Brooks, Mrs. G’s daughter a family of high principles and culture. Mrs. B being a writer of ability and a contributor to the current principles of the time. It is not surprizing [sic] that out of this refined these little orphan children developed into the cultured and high principled man and woman. Jamie found his vocation in the business walks of life, and Jennie found hers in the greatest service one can render mankind, that of teaching the young. She married Professor Sykes a gentleman of scholastic attainments  and reared to manhood three noble sons and one young daughter, All of whom survive her and faithful to their teaching are following in parental footsteps. Mrs. Sykes taught school many years, returning home one day weary and worn at the close of the days’ duties. Suddenly and without warning, the Heavenly Master called her to cease her labors, and her sweet life went out “As when a lamp is blown out by a gust of wind at a casement. The freed soul heard the master’s voice when he said “Well done thou good and faithful servant, etc.” The record of such a life leaves to posterity a legacy of inestimable value. The high thinking patient purpose of loving Jennie to others furnishes an example of a truly noble character illustrating beautifully the efficacy of self-respect and self-reliance in the life of this modest and good woman, strong to do good and a heart brave and upright. It carries with it an influence which is never lost contact with such a character hinges in the memory like the adorous breath of sweet flowers, and fragrant bushes on the garments that one has touched. The Scriptures given to us for instruction and admonition describe fully the worth of a good woman. She was like a rose by the wayside, so simple and tender. Her art was [illegible] because she was true. We thought not of greatness or wisdom or splendor. We loved her and that was all that we knew.