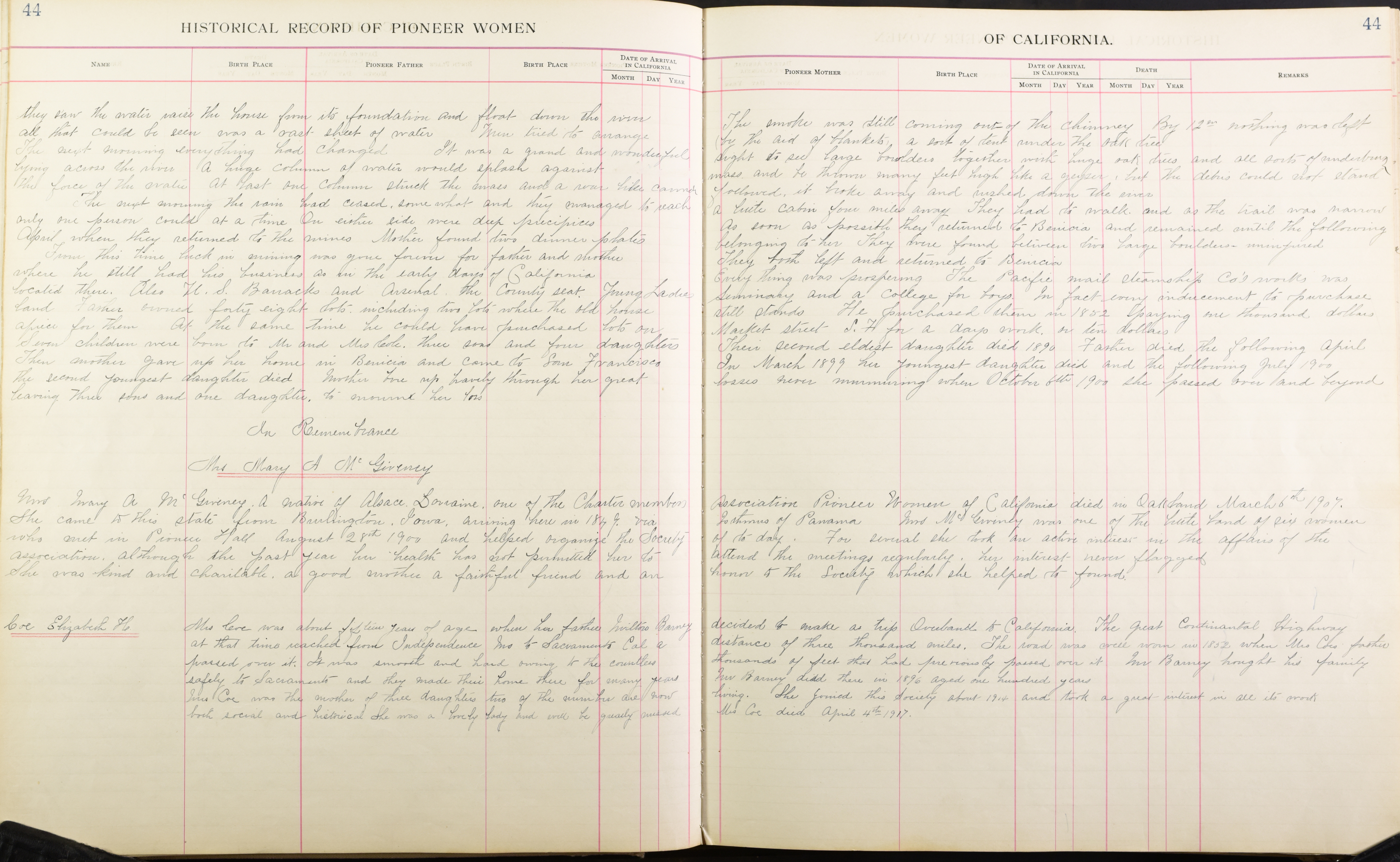 [continued from page 43]
they saw the water raise the house from its foundation and float down the river . The smoke was still coming out of the chimney. By 12am nothing was left. All that could be seen was a vast sheet of water. Men tried to arrange (by the aid of blankets) a sort of tent under the oak tree. The next morning everything had changed. It was a grand and wonderful sight to  see large boulders together with huge oak trees and all sorts of [illegible] lying across the river. A huge column of water would splash against [word erased] and be thrown many feet high like a [illegible], but the debris could not stand the force of the water. At last one column struck the mass and a river like [illegible] followed, it broke away and rushed down the river.

The next morning the rain had ceased somewhat and they managed to reach a quiet cabin four miles away. They had to walk and as the trail was narrow only one person could at a time. On either side were deep precipices. As soon as possible they returned to Benicia and remained until the following April when they returned to the mines. Mother found two dinner plates belonging to her. They were found between two large boulders–uninjured.

From this time luck in mining was gone forever for father and mother. They both left and returned to Benicia where he still had his business as in the early days of California. Everything was prospering. The Pacific mail steamship Co’s works was located there. Also U.S. Barracks and Arsenal, Young Ladies Seminary, and a college for boys. In fact, every inducement to purchase land. Father owned forty eight lots including two lots where the old house still stands. He purchased them in 1852 paying one thousand dollars apiece for them. At the same time he could have purchased lots on Market Street S.F. for a day’s work or ten dollars. Seven children were born to Mr. and Mrs. Cole, three sons and four daughters. Their second eldest daughter died in 1890. Father died the following April. The second youngest daughter died. Mother [illegible] up heavily through her great losses never mourning when October 6th, 1900 she passed over and beyond leaving three sons and one daughter to mourn her loss.

In Rememberance
Mrs. Mary A. McGiveney

Mrs. Mary A. McGiveney, a native of Alsace Lorraine, one of the Charter members Association of Pioneer Women of California died in Oakland March March 6th 1907. She came to this state from Burlington, Iowa, arriving here in 1849 via Isthmus of Panama. Mrs. McGiveney was one of the little land of six women who met in Pioneer Hall August 28th 1900 and helped organize the Society of today. For several she took an active interest in the affairs of the association, although the past year her health has not permitted her to attend the meetings regularly, her interest never flagged. She was kind and charitable, a good mother a faithful friend and an honor to the Society which she helped to found.

Mrs. Coe was about fifteen years of age when her father Milton Barney decided to make a trip Overland to California. The great Continental Highway at that time reached from Independence MO to Sacramento Cal. a distance of three thousand miles. The road was well worn in 1852 when Mrs. Cole’s father passed over it. It was smooth and hard owing to the countless thousands of feet that had previously passed over it. Mr. Barney brought his family safely to Sacramento and they made their home there for many years. Mr. Barney died there in 1896 aged one hundred years. Mrs. Cole was the mother of three daughters, two of the number are now living. She joined this Society about 1914 and took a great interest in all its work both social and historical. She was a lovely lady and will be greatly missed. Mrs. Cole died April 4th, 1917.