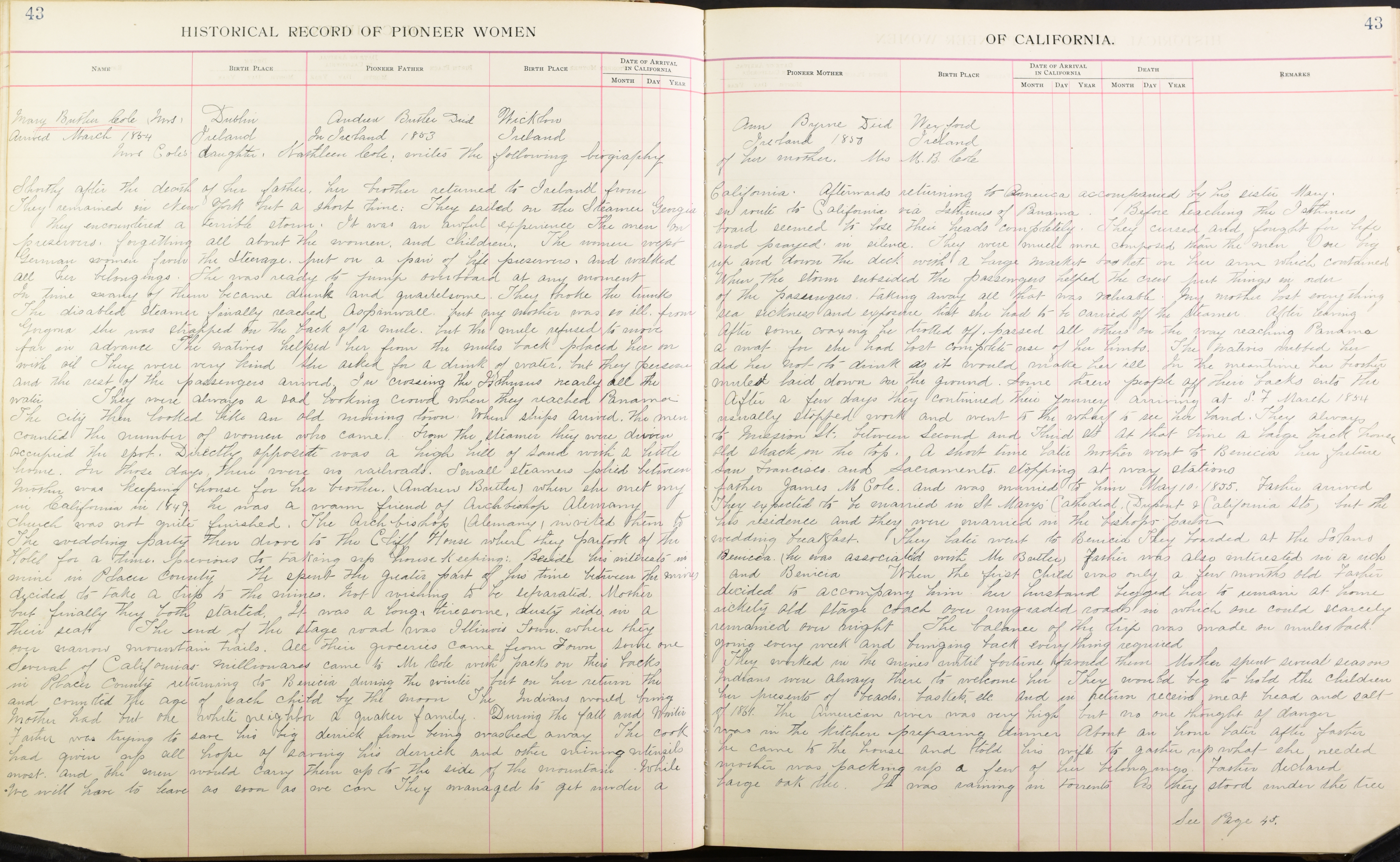 Shortly after the death of her father, her brother returned to Ireland from California. Afterwards returning to America accompanied by his sister Mary. They remained in New York but a short time. They sailed on the Steamer Georgia, en route to California via Isthmus of Panama. Before reaching the Isthmus they encountered a terrible storm. It was an awful experience. The men on board seemed to lose their heads completely. They cursed and fought for life preservers, forgetting all about the women and children. The women wept and prayed in silence. They were much more composed than the men. One big German woman from the steerage put on a pair of life preservers, and walked up and down the deck with a large market basket on her arm which contained all her belongings. She was ready to jump overboard at any moment. When the storm subsided the passengers helped the crew put things in order. In time many of them became drunk and quarrelsome. They broke the trunks of the passengers, taking away all that was valuable. My mother lost everything. The disabled steamer finally reached Aspinwall, but my mother was so ill from sea sickness and exposure that she had to be carried off the steamer. After leaving Gorgona she was strapped on the back of a mule, but the mule refused to move. After some coaxing he trotted off, passed all others on the way reaching Panama far in advance. The natives helped her from the mule’s back, placed her on a mat for she had lost complete use of her limbs. The natives rubbed her with oil. They were very kind. She asked for a drink of water, but they persuaded her not-to-drink as it would make her ill. In the meantime her brother and the rest of the passengers arrived. In crossing The Isthmus nearly all the mules laid down on the ground. Some threw people off their backs into the water. They were always a sad looking crowd when they reached Panama. After a few days they continued their journey arriving at S.F. March 1854.

The city then looked like an old mining town. When ships arrived, the men usually stopped work and went to the wharf to see her land. They always counted the number of women who came from the steamer, they were driven to mission St., between Second and Third Sts.  At that time a large brick house occupied the spot. Directly opposite was a high hill of sand with a little old shack on the top. A short time later Mother went to Benicia, her future home. In those days there were no railroads. Several steamers plied between San Francisco and Sacramento, stopping at way stations.

Mother was keeping house for her brother (Andrew Butler) when she met my father James M. Cole, and was married to him May 10, 1855. Father arrived in California in 1849, he was a warm friend of Archbishop Alemany. They expected to be married in St. Mary’s Cathedral (Dupont & California Sts.) but the church was not quite finished.  Archbishop Alemany invited them to his residence and they were married in the bishop’s parlor.

The wedding party then drove to The Cliff House where they partook of the wedding breakfast. They later went to Benicia. They boarded at the Solano Hotel for a time previous to taking up housekeeping. Beside his interest in Benicia (he was associated with Mr. Butler) Father was also interested in a rich mine in Placer County. He spent the greater part of his time between the mines and Benicia. When the first child was only a few months old Father decided to take a trip to the mines. Not wishing to be separated, Mother decided to accompany him, her husband begged her to remain at home but finally they both started. It was a long, tiresome, dusty ride in a rickety old stage coach over ungraded roads in which one could scarcely their seats. The end of the stage road was Illinois town, where they remained over night. The balance of the trip was made on mules backs, over narrow mountain trails. All their groceries came from town some one going every week and bringing back everything required.

Several of California’s millionares [sic] came to Mr. Cole with packs on their backs. They worked in the mines until fortune favored them. Mother spent several seasons in Placer County returning to Benicia during the winter but on her return the Indians were always there to welcome her. They would beg to hold the children and counted the age of each child by the moon. The Indians would bring her presents of beads, baskets, etc. and in return received meat bread and salt. Mother had but the white neighbor a quaker family. During the fall and winter of 1861. The American river was very high but no one thought of danger. Father was trying to save his big derrick from being washed away. The cook was in the kitchen preparing dinner. About an hour later after father had given up all hope of saving his derrick and other mining utensils, he came to the house and told his wife to gather up what she needed most and the men would carry them up to the side of the mountain. While mother was packing up a few of her belongings, Father declared We will have to leave as soon as we can. They managed to get under a large oak tree. It was raining in torrents. As they stood under the tree