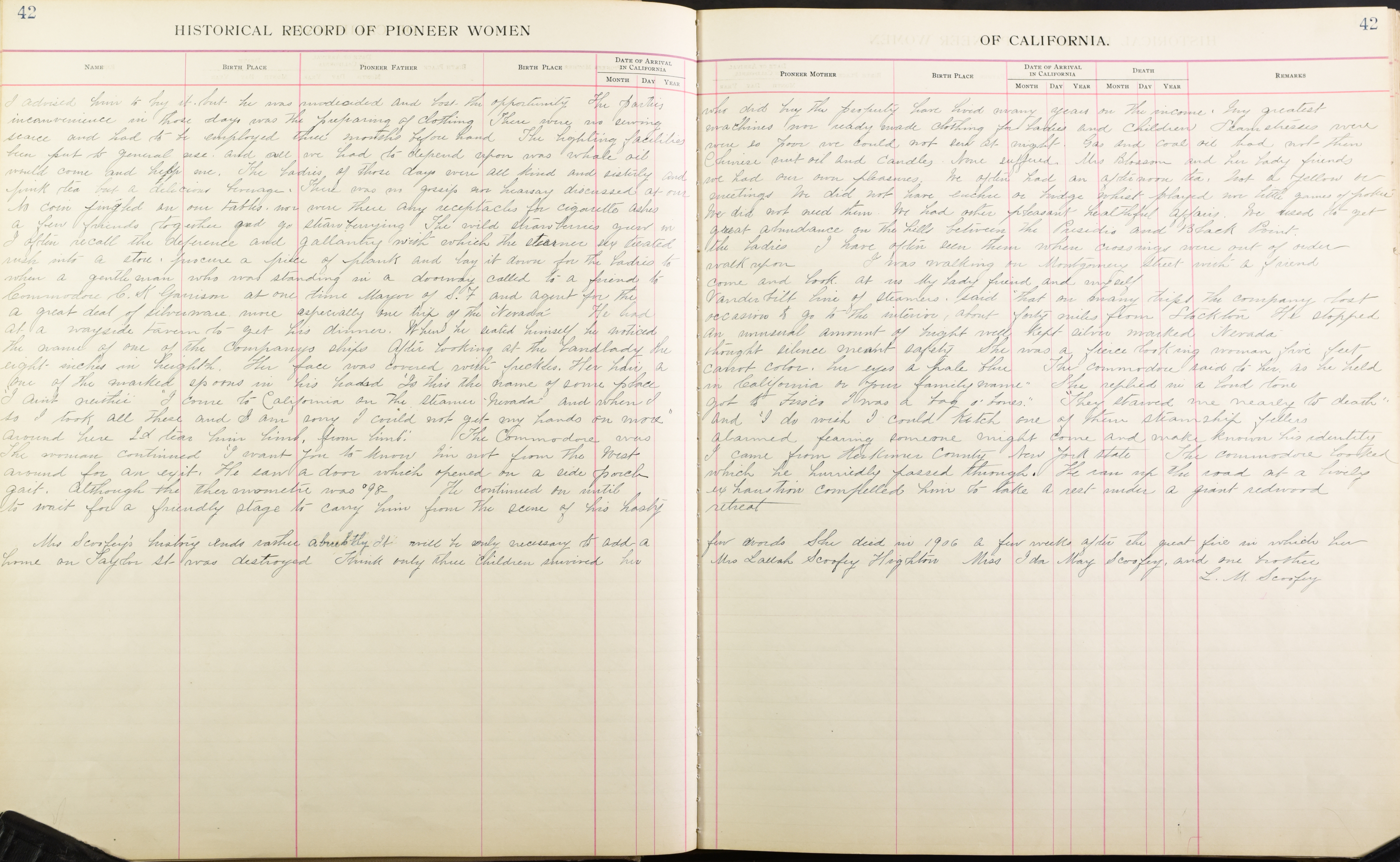 He afterward became cashier and bookkeeper for the Bank of California where he remained until his death. (about the year 1900) The building that we had rented was prepared in Valparaiso Chili and the materials brought here by a Frenchman named Archernond. The location at that time was the center of business. I could see from my back window the water lots staked out. It was a question then whether they would ever be filled in. Mr. Scoofey was offered a fifty vara water lot at the corner of Davis and Sacramento Streets for three hundred dollars. I advised him to buy I, but he was undecided and lost the opportunity. The parties who did buy the property have lived many years on the income. My greatest inconvenience in those days was the preparing of clothing. There were no sewing machines nor ready made clothing for ladies and children. Seamstresses were scarce and had to be employed three months beforehand. The lighting facilities were so poor we could not sew at night. Gas and coal oil had not then been put to general use and all we had to depend upon was whale oil Chinese nut oil and candles. None sufficed. Mrs. Blossom and her lady friends would come and help me. The ladies of those days were all kind  and sisterly and we had our own pleasures. We often had an afternoon tea, not a yellow or pink tea, but a delicious beverage. There was no gossip nor hearsay discussed at our meetings. We did not have euchre or bridge whist played nor little games of poker. No coin jingled on our tables, nor were there any receptacles for cigarette ashes. We did not need them, we had other pleasant beautiful affairs. We used to get a few friends together and go strawberrying. The wild strawberries grew in great abundance on the hills between the Presidio and Black Point. I often recall the deference and gallantry with which the sterner sex treated the ladies, I have often seen them where crossings were out of order rush into a store, procure a piece of plank and lay it down for the ladies to walk upon. I was walking on Montgomery street with a friend when a gentleman who was standing in a doorway called to a friend to come and look at us my lady friend and myself. Commondore C.K. Garrison at one time Mayor of S.F. and agent for the Vanderbilt line of steamers said “that on many trips the company lost a great deal of silverware more especially one trip of the ‘Nevada.’ He had occasion to go to the interior, about forty miles from Stockton. He stopped at a wayside tavern to get his dinner. When he seated himself he noticed an unusual amount of bright well kept silver marked ‘Nevada’ the name of the company’s ships. After looking at the landlady the thought silence meant safety. She was a fierce looking woman five feet eight inches in heighth. Her face was covered with freckles, her hair a carrot color. Her eyes a pale blue. The commondore said to her as he held one of the marked spoons in his hand  “Is this the name of some place in California or your family name” She replied in a loud tone “I aint neither” “I come to California on the steamer Nevada and when I got to Frisco I was a bag o’ bones.” “They starved me nearly to death” so I took all these and I am sorry I could not get my hands on more” and “ I do wish I could Ketch one of them steamship fellers around here. I’d tear him limb from limb.” The Commondore was alarmed fearing someone might come and make known his identity. The woman continued  “I want you to know I’m not from the West  I came from Herkinner County New York State. The commondore looked gait, although the thermometer was °98- He continued on until exhaustion compelled him to take a rest under a giant redwood to wait for a friendly stage to carry him from the scene of his hasty retreat.

Mrs. Scoofey’s history ends rather abruptly. It will be only necessary to add a few words. She died in 1906 a few weeks after the great fire in which her home on Taylor St was destroyed. Think only three children survived her Mrs. Lallah Scoofey  Highton Miss Ida May Scoofey, and one brother L. M. Scoofey