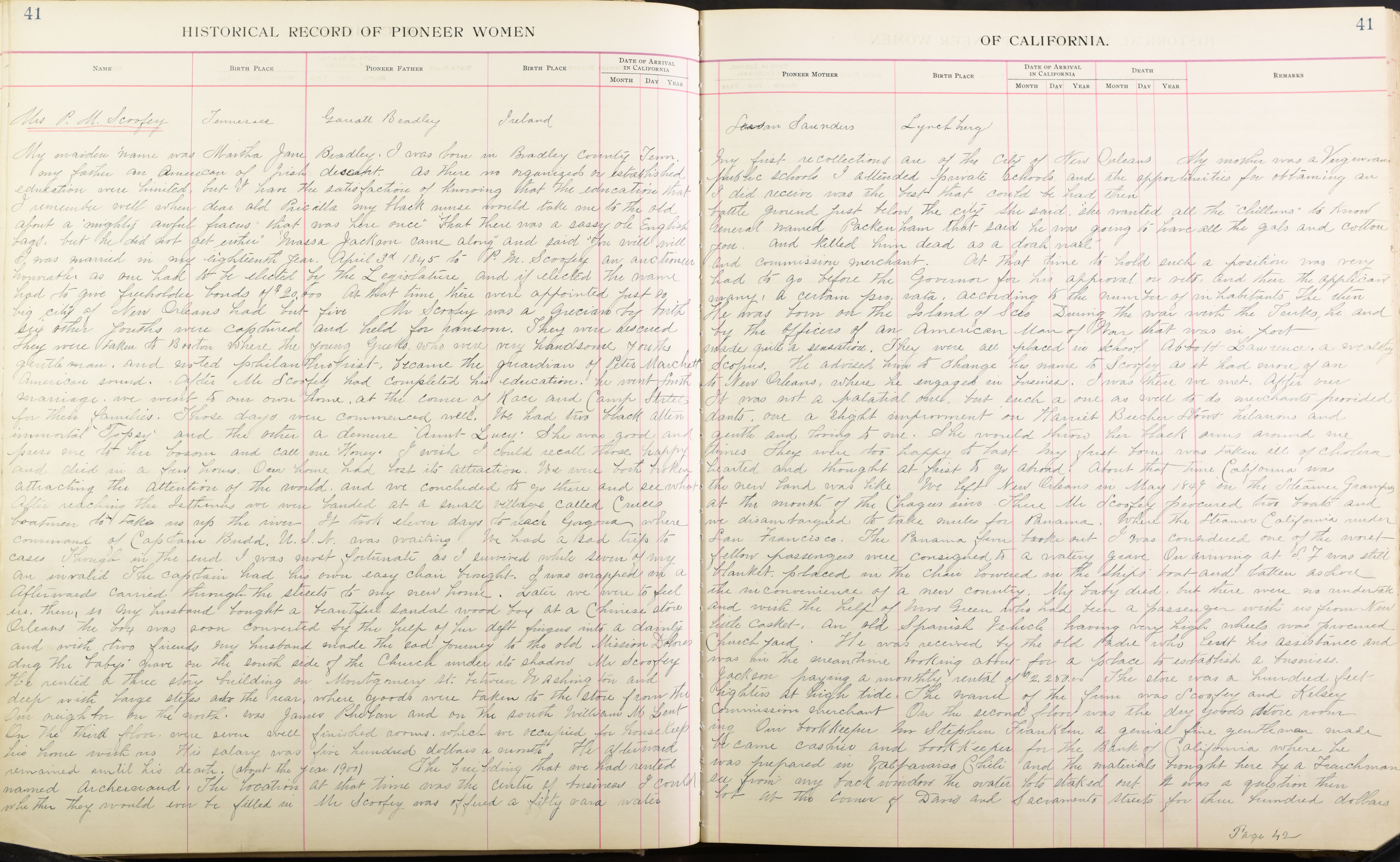 Remarks: My maiden name was Martha Jane Bradley. I was born in Bradley County Tenn. My first recollections are of the city of New Orleans. My mother was a Virginian, my father an American of Irish descent. As there no organized or established public schools I attended private schools and the opportunities for obtaining an education were limited, but I have the satisfaction of knowing that the education that I did receive was the best that could be had then. I remember well when dear old Pricilla my black nurse would take me to the old battle ground just below the city. She said, “she wanted all the ‘chilluns’ to know about a ‘mighty awful fracus’ that was here once.” “That there was a sassy old English General named Packenham that said he was going to have all the gals and cotton bags, but he did not get either.” “Massa Jackson came along” and said “You will will you, and killed him dead as a doah nail.” I was married in my eighteenth year. April 3rd 1845 to P. M. Scoofey an auctioneer and commission merchant. At that time to hold such a position was very honorable, as one had to be elected by the Legislature and if elected the name had to go before the Governor for his approval or veto, and the applicant had to give freeholder bonds of $20,000. At the time there were appointed just so many, a certain pro, vata, according to the number of inhabitants. The then big city of New Orleans had but five. Mr. Scoofey was a Grecian by birth. He was born on the island of Scio. During the war with the Turks, he and six other youths were captured and held for ransom. They were rescued by the officers of an American Man of War that was in port. They were taken to Boston where the young Greeks, who were very handsome youths made quite a sensation. They were all placed in school. Abbott Lawrence, a wealthy gentleman, and noted philanthropist, became the guardian of Peter Marchett Scopus. He advised  him to change his name to Scooffy as it had more of an American sound. After Mr. Scoofey had completed his education, he went forth to New Orleans, where he engaged in business. I was there we met. After our marriage, we went to our own home, at the corner of Race and Camp Strtets. It was not a palatial one, but such a one as well to do merchants provided for their families. Those days were commenced well. We had two black attendants, one a slight improvement on Harriet Beecher Stow’s hilarious and immortal “Topsy,” and the other a demure ‘Aunt Lucy.’ She was She was good and gentle and loving to me. She would throw her black arms around me, press me to her bosom and call me ‘Honey.’ I wish I could recall those happy times. They were too happy to last. My first born was taken ill of cholera and died in a few hours. Our home had lost its attraction. We were both broken hearted and thought at first to go abroad. About that time California was attracting the attention of the world, and we concluded to go there and see what the new land was like. We left New Orleans in May 1849 on the Steamer [illegible]. After reaching the Isthmus we were landed at a small village called Cruces at the mouth of the Chagres river. There Mr. Scoofey procured two boats and boatmen to take us up the river. It took eleven days to reach Gorgona where we disambargued to take mules for Panama. Where the Steamer California under command of Captain Budd, U.S.N was waiting. We had a sad trip to San Francisco. The Panama fever broke out. I was considered one of the worst cases. Though in the end I was most fortunate as I survived while seven of my fellow passengers were consigned to a watery grave. On arriving at S.F was still an invalid. The captain had his own easy chair brought. I was wrapped in a blanket, placed in the chair, lowered in the ship’s boat and taken ashore. Afterwards carried through the streets to my new home. Later we were to feel the inconvenience of a new country. My baby died, but there were no undertakers then, so my husband bought a beautiful sandal wood box at a Chinese store and with the help of Mrs. Green who had been a passenger with us from New Orleans. The box was soon converted by the help of her deft fringes into a dainty little casket. An old Spanish vehicle having very high wheels was procured and with two friends my husband made the sad journey to the old Mission Dolores Churchyard. He was received by the old Padre who lent his assistance and dug the baby’s grave on the south side of the Church under its shadow. Mr. Scoofey was in the meantime looking about  for a place to establish a business. He rented a three story building on Montgomery St. between Washington and Jackson paying a monthly rental of $2,250.00. The store was a hundred feet deep with large steps ate the rear, where goods were taken to the store from the highters at high tide. The name of the firm was Scoofey and Kelsey. One neighbor on the north was James Phelan and on the south William M. Lent commissioner merchant. On the second floor was the dry goods store room. On the third floor were seven well furnished rooms, which were occupied for housekeeping. Our bookkeeper Mr. Stephen Franklin a genial fine gentleman made his home with us. His salary was five hundred dollars a month.