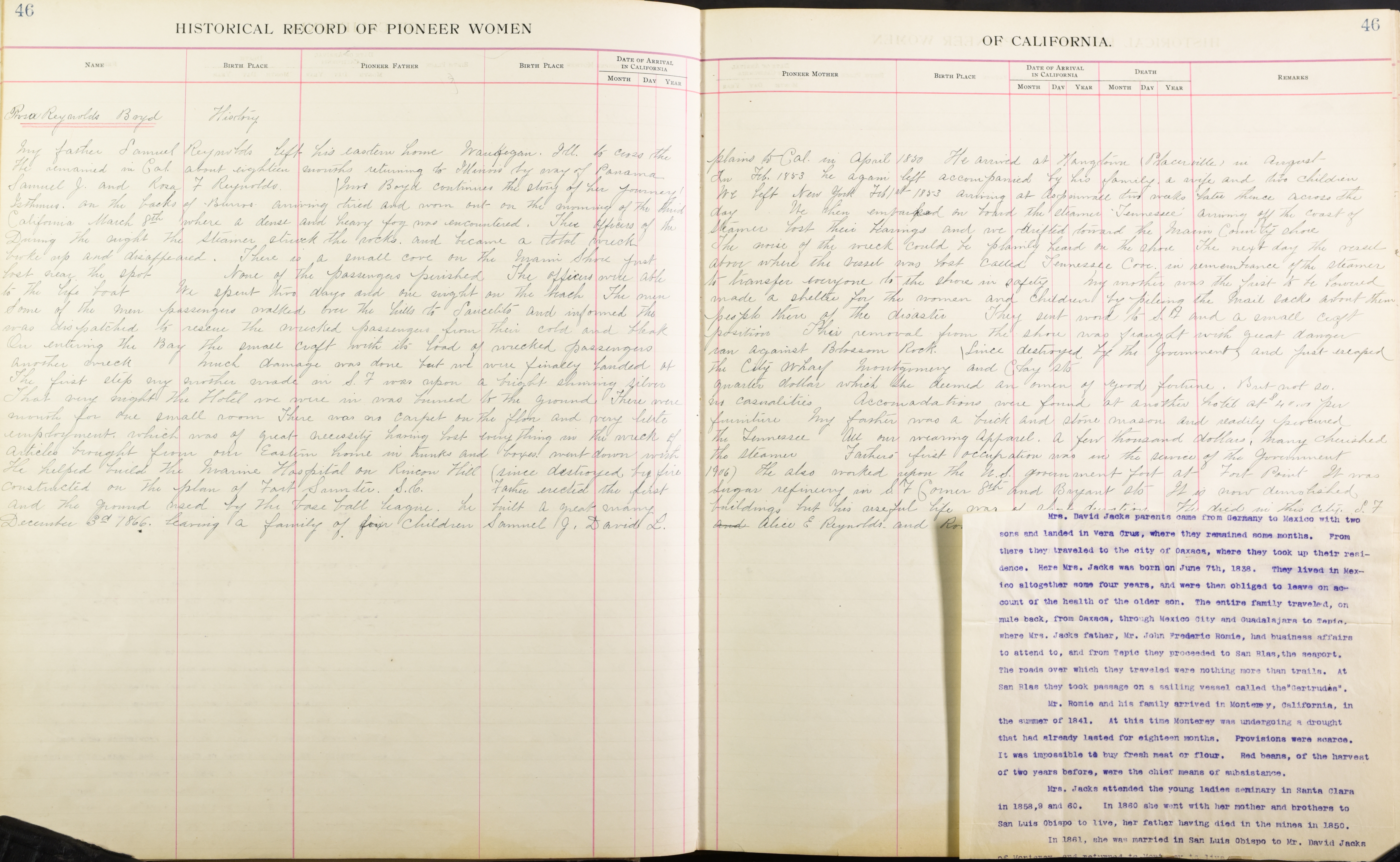 My father Samuel Reynolds left his eastern home, Waukegan, Ill to cross the plains to Cal. In April 1850. He arrived at Hangtown (Placerville) in August. He remained in Cal. About eighteen months returning to Illinois by way of Panama. In Feb. 1853 he again left accompanied by his family, a wife and two children Samuel J. and Rosa F. Reynolds. Mrs. Boyd continues the story of her journey . We left New York Feb. 1st 1853. Arriving at Aspinwall two weeks later thence across the Isthmus. On the backs of Burros arriving tired and worn out on the morning of the third day. We then embarked on board the steamer ‘Tennessee’ arriving off the coast of California March 8th where a dense and heavy fog was encountered. The officers of the steamer lost their bearings and we  drifted towards the Marin County shore. During the night the steamer struck the rocks and became a total wreck. The noise of the wreck could be plainly heard on the shore. The next day the vessel broke and disappeared.  There is a small cove on the main shore just about where the vessel was lost called Tennessee Cove in remembrance of the steamer lost near the spot. None of the passengers perished. The officers were able to transfer everyone to the shore in safety. My mother was the first to be lowered to the life boat. We spent two days and one night on the beach. The men made a shelter for the women and children by pileing the mail sacks about them. Some of the men passengers walked over the hills to Saucelito and informed and informed the people there of the disaster. They sent word to S.F and a small craft was dispatched to rescue the wrecked passengers from their cold and bleak position. Their removal from the shore was fraught with great danger. On entering the Bay the small craft with its load of wrecked passengers ran against Blossom Rock, since destroyed by the Government, and just escaped another wreck. Much damage was done but we were finally landed at the City Wharf Montgomery and Clay Sts. The first step my mother made in S.F was upon a bright shining silver quarter dollar which she deemed an omen of good fortune. But not so. That very night the Hotel we were in was burned to the ground. There were no casualties. Accomadations were found  at another hotel at $40.00 per month for one small room. There was no carpet on the floor and very little furniture. My father was a brick and stone mason and readily procured employment which was of great necessity having lost everything in the wreck of the Tennessee. All our wearing apparel, a few thousand dollars, many cherished articles brought from our Eastern home in trunks and boxes went down with the steamer. Father’s first occupation was in the service of the Government He helped build the Marine Hospital on Rincon Hill (since destroyed by fire 1906). He also worked upon the U.S. government fort at Fort Point. It was constructed on the plan  of Fort Sumter. S.C. Father erected the first Sugar refinery in S.F Corner 8th and Bryant Sts. It is now demolished and the ground used by the baseball league. He built a great many buildings, but his useful life was of short duration. He died in this city S.F December 3rd 1866. Leaving a family of four children Samuel J, David L, Alice E. Reynolds and Rosa Reynolds.

Mrs. David Jacks parents came from Germany to Mexico with two sons and landed in Vera Cruz, where they remained for some months. From there, they traveled to the city of Oaxaca, where they took up their residence. Here Mrs. Jacks was born on June 7th, 1838. They lived in Mexico altogether some four years, and were then obliged to leave on account of the health of the older son. The entire family traveled, on mule back, from Oaxaca, through Mexico City and Guadalajara to Tepic, where Mrs. Jacks father, Mr. John Predaric Romie, had business affairs to attend to, and from Tepic they proceeded to San Blas they took passage on sailing vessel called the “Gertrudes”.

Mr. Romie and his family arrived in Monterey, California, in the summer of 1841. At this time Monterey was undergoing a drought that had already lasted eighteen months. Provisions were scarce. It was impossible to buy fresh meat or flour. Red beans, of the harvest of two years before, were the chief means of subsistence.

Mrs. Jacks attended the young ladies seminary in Santa Cruz in 1858, 9 and 60. It 1860 she went with her mother and brothers to San Luis Obispo to live, her father having died in the mines in 1850. In 1861, she was married in San Luis Obispo to Mr. David Jacks of Monterey and returned to Monterey to live.