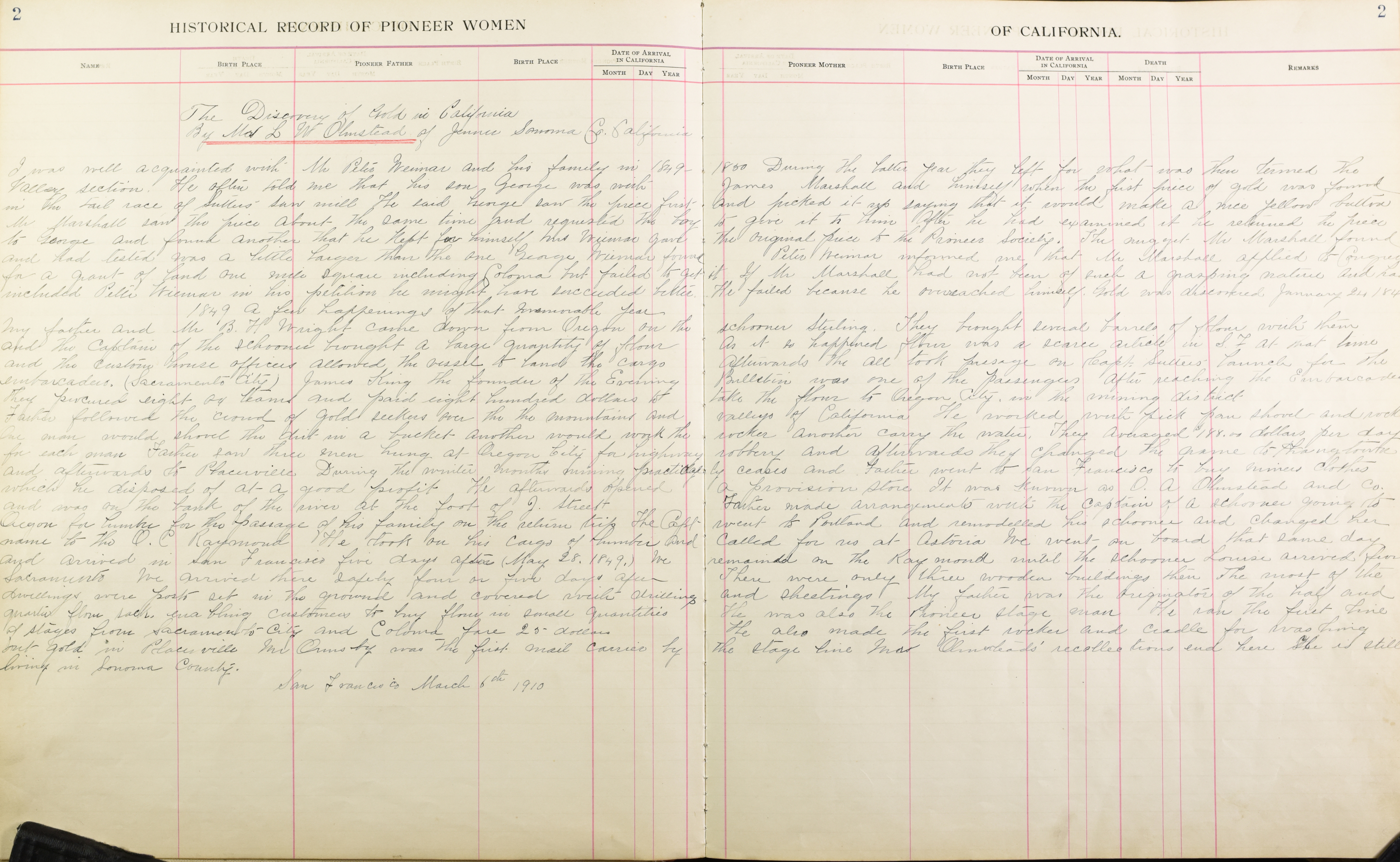 The Discovery of Gold in California

I was well acquainted with Mr. Peter Weimar and his family in 1849-1850, During the latter year they left for what was then termed the Valley section. He often told me that his son George was with James Marshall and himself when the first piece of gold was found in the tail race of Sutter’s Saw mill.  He said George saw the piece first and picked it up saying that it would make a nice yellow button. Mr. Marshall saw the piece about the same time and requested the boy to give it to him. After he had examined it he returned the piece to George and found another that he kept for himself. Mr. Weimar gave the original piece to The Pioneer Society. The nugget Mr. Marshall found and had tested was a little larger than the one George Weimar found. Peter Weimar informed me that Mr. Marshall applied to Congress for a grant of land one mile square including Coloma but failed to get it. If Mr. Marshall had not been of such a grasping nature and had included Peter Wiemar [sic] in his petition he might have succeeded better. He failed because he overreached himself. Gold was discovered January 26, 1848.

1849 A few happenings of that memorable year

My father and Mr. B.H. Wright came down from Oregon on the schooner Sterling. They brought several barrels of flour with them and the Captain of the schooner brought a large quantity of flour. As it so happened flour was a scarce article in S.F. at that time and the Custom House officers allowed the vessel to land the cargo. Afterwards they all took passage on Capt. Sutters launch for the embarcadero. (Sacramento City.) James King the founder of the Evening Bulletin was one of the passengers. After reaching the Embarcadero they procured eight ox teams and paid eight hundred dollars to take the flour to Oregon City in the mining district. Father followed the crowd of gold seekers over the the [sic] mountains and vallleys of California.  He worked with pick pan shovel and rocker. One man would shovel the dirt in a bucket another would work the rocker another carry the water. They assayed $188.00 dollars per day for each man. Father saw three men hung at Oregon City for highway robbery and afterwards they changed the name to Hangtown and afterwards to Placerville. During the winter months mining practically ceases and Father went to San Francisco to buy miners clothes which he disposed of at a good profit. He afterwards opened a provision store. It was known as O.A. Olmstead and Co. and was on the bank of the river at the foot of J. Street. Father made arrangements with the Captain of a schooner going to Oregon for lumber for the passage of his family on the return trip. The Capt went to Portland and remodeled his schooner and changed the name to The O.C. Raymond. He took on cargo of lumber and called for us at Astoria. We went on board that same day and arrived in San Francisco five days after (May 28, 1849.) We remained on the Raymond until the schooner Louisa arrived from  Sacramento. We arrived there safely four or five days after. There were only three wooden buildings then. Then most of the dwellings were posts set in the ground and covered with drillings and sheetings. My father was the originator of the half and quarter flour sack enabling customers to buy flour in small quantities. He was also the Pioneer stage man. He ran the first line of stages from Sacramento City and Coloma fare 25 dollars. He also made the first rocker and cradle for washing out gold in Placerville. Mr. Ormsby was the first mail carrier by the stage line Mr. Olmsteads’ recollections end here. He’s still living in Sonoma County.