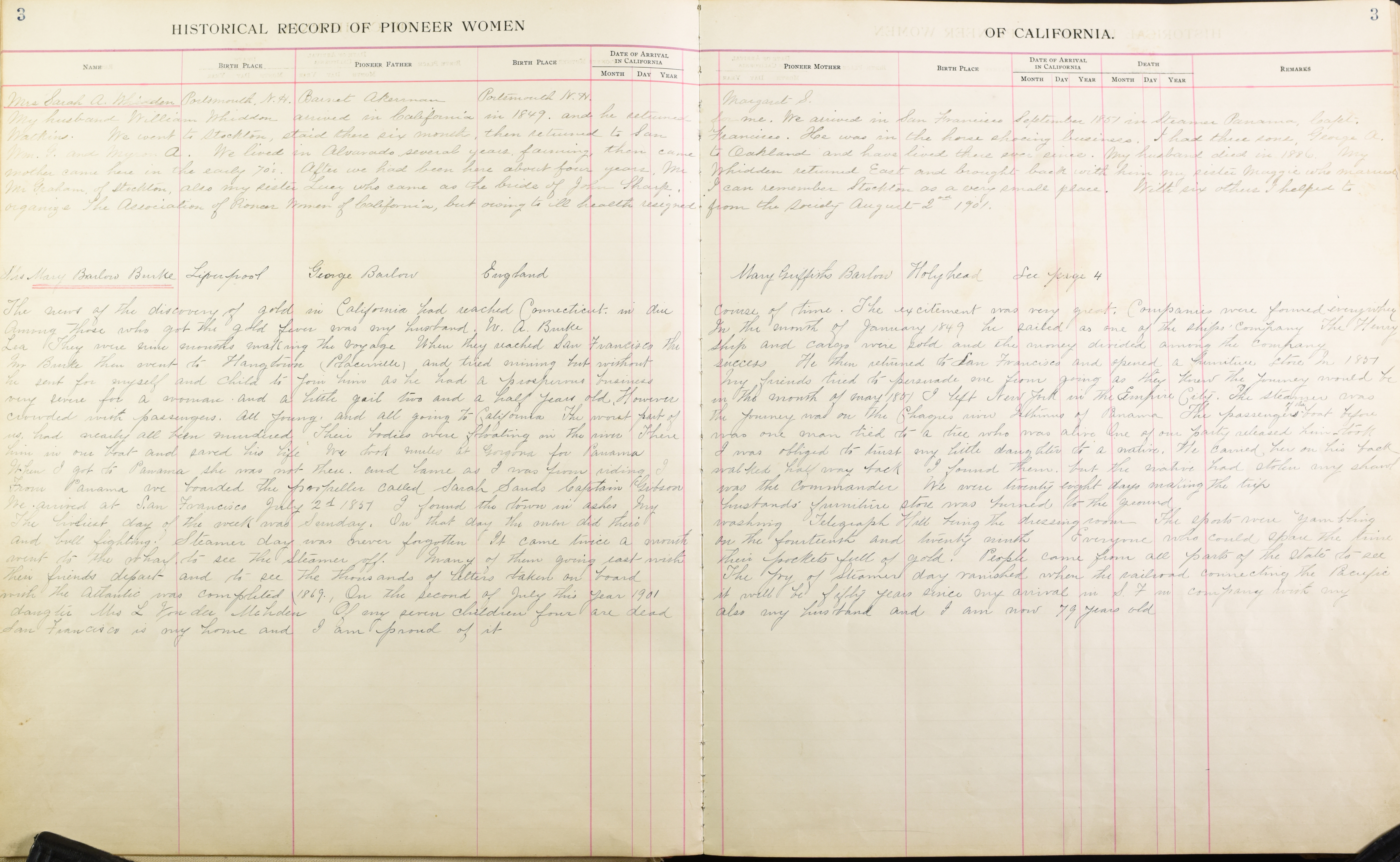 Remarks: My husband William Whiddon arrived in California in 1849 and he returned for me. We arrived in San Francisco September 1851 in Steamer Panama, Capt. Watkins. We went to Stockton, staid [sic] there six months, then returned to San Francisco. He was in the horse shoeing business. I had three sons, George A., Wm. G.  and Myron A. We lived in Alvarado several years farming, then came to Oakland and have lived there ever since. My husband died in 1886. My mother came here in the early 70’s. After we had been here about four years, Mr. Whiddon returned East and brought back with him my sister Maggie who married Mr. Graham of Stockton, also my sister Lucy who came as the bride of John Sharp. I can remember Stockton as a very small place. With six others I helped to organize The Association of Pioneer Women of California, but owing to ill health resigned from the Society August 2nd, 1901.

Remarks: The news of the discovery of gold in California had reached Connecticut in due course of time. The excitement was very great. Companies were formed everywhere. Among those who got the gold fever was my husband, W. A.  Burke. In the month of January 1849 he sailed as one of the ships’ company The Henry Lea. They were nine months making the voyage When they reached San Francisco the ship and cargo were sold and the money divided among the company. Mr. Burke then went to Hangtown (Placerville) and tried mining but without success. He then returned to San Francisco and opened a furniture store in 1851. He sent for myself and child to join him as he had a prosperous business. My friends tried to persuade me from going as they knew the journey would be very severe for a woman and a little girl two and a half years old. However in the month of May 1851 I left New York in the Empire City. The steamer was crowded with passengers. All young and all going to California. The worst part of the journey was on the Chagres river Isthmus of Panama. The passengers of the boat before us had nearly all been murdered. Their bodies were floating in the river. There was one man tied to a tree who was alive. One of our party released him – took him in our boat and saved his life.  We took mules at Gorgona for Panama. I was obliged to trust my little daughter to a native. He carried her on his back. When I got to Panama she was not there, and lame as I was from riding I walked halfway back. I found them but the native had stolen my shawl. From Panama we boarded the propeller called Sarah Sands. Captain Gibson was the commander. We were twenty-eight days making the trip. We arrived at San Francisco July 2d, 1851. I found the town in ashes. My husband’s furniture store was burned to the ground. The liveliest day of the week was Sunday. On that day the men did their washing. Telegraph Hill being the dressing room. The sports were gambling and bull fighting. Steamer day was never forgotten. It came twice a month on the fourteenth and twenty ninth. Everyone who could spare the time went to the wharf to see the Steamer off. Many of them going east with their pockets full of gold. People came from all parts of the state to see their friends depart and to see the thousands of letters taken on board. The joy of Steamer day vanished when the railroad connecting the Pacific with the Atlantic was completed 1869. On the second of July this year 1901 it will be fifty years since my arrival in S. F in company with my daughter Mrs. L. Von de Meliden. Of my seven children four are dead. Also my husband and I are now 79 years old. San Francisco is my home and I am proud of it.