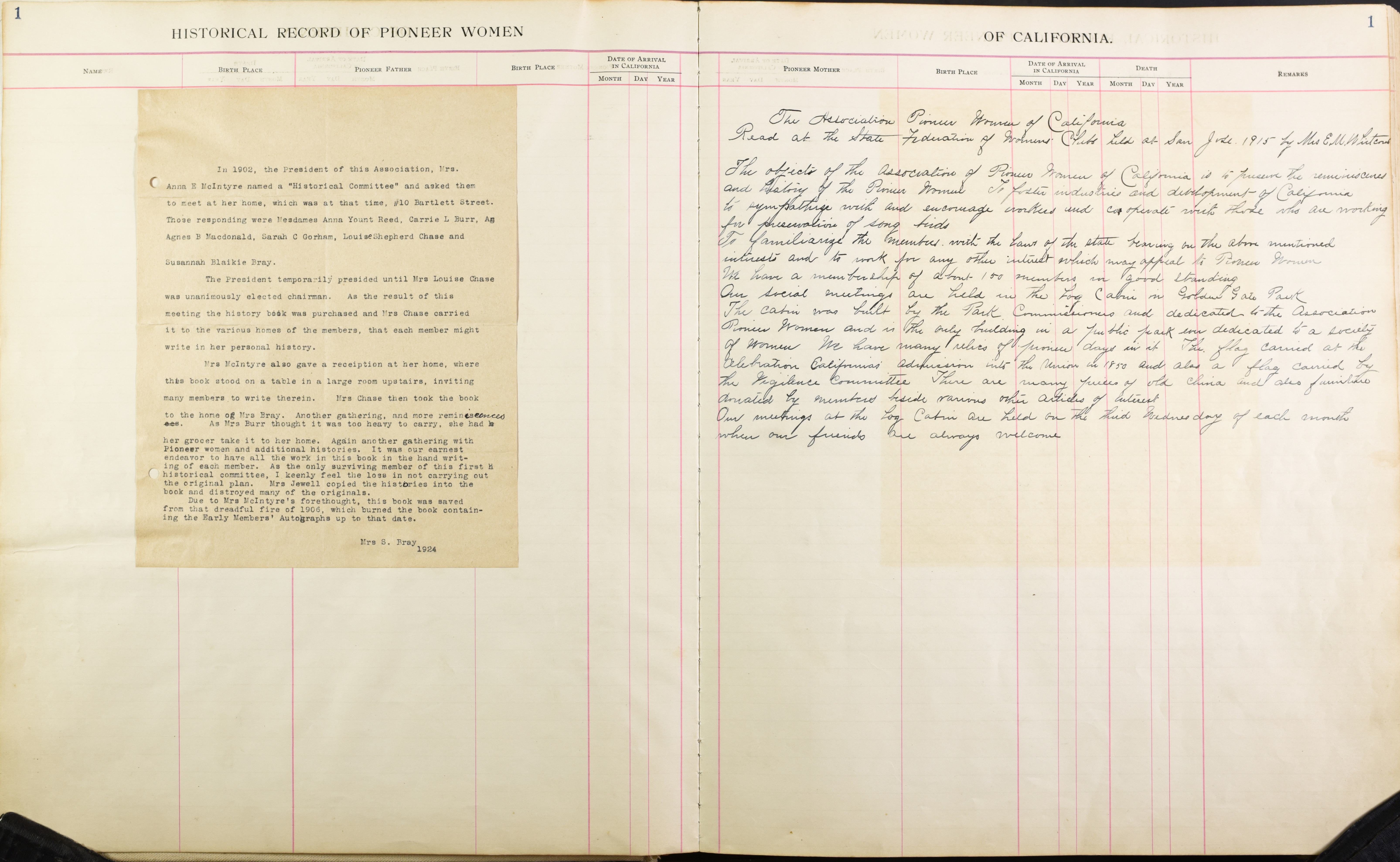 In 1902, the President of this Association, Mrs. Anna E. McIntyre named a “Historical Committee” and asked them to meet at her home, which was at that time, #10 Bartlett Street. Those responding were Mesdames Anna Yount Reed, Carrie L. Burr, Agnes B. Macdonald, Sarah C. Gorham, Louise Shephard Chase and Susannah Blaikie Bray.

The President temporarily presided until Mrs. Louise Chase was unanimously elected chairman.  As the result of this meeting the history book was purchased and Mrs. Chase carried it to the various homes of the members, that each member might write in her personal history.

Mrs. McIntyre also gave a reception at her home, where the book stood on a table in a large room upstairs, inviting many members to write to write therein. Mrs. Chase then took the book to the home of Mrs. Bray. Another gathering, and more reminiscences. As Mrs. Burr thought it was too heavy to carry, she had her grocer take it to her home. Again another gathering with Pioneer women and additional histories. It was our earnest endeavor to have all the work in this book in the hand writing of each member. As the only surviving member of this first historical committee, I keenly feel the loss in not carrying out the original plan. Mrs. Jewell copied the histories into the book and destroyed many of the originals.

Due to Mrs. McIntyre’s forethought, this book was saved from that dreadful fire of 1906, which burned the book containing the Early Members Autographs up to that date.

The Association Pioneer Women of California

The object of The Association of Pioneer Women of California is to preserve the reminiscences and history of The Pioneer Women to foster industries and development of California to sympathize with and encourage workers and co-operate with those who are working for preservation of song birds.

To familiarize the members with the laws of the state bearing on the above mentioned interests and to work for any other interest which may appeal to Pioneer Women.

We have a membership of about 100 members in good standing.

Our social meetings are held in The Log Cabin in Golden Gate Park.

The cabin was built by the Park Commissioners and dedicated to a society of Women. We have many relics of pioneer days in it. The flag carried at the Celebration Californias’ Admission into the union in 1850 and also a flag carried by The Vigilance Committee. There are many pieces of old china and also furniture donated by members beside various other articles of interest.

Our meetings at The Log Cabin are held on the third Wednesday of each month when our friends are always welcome.