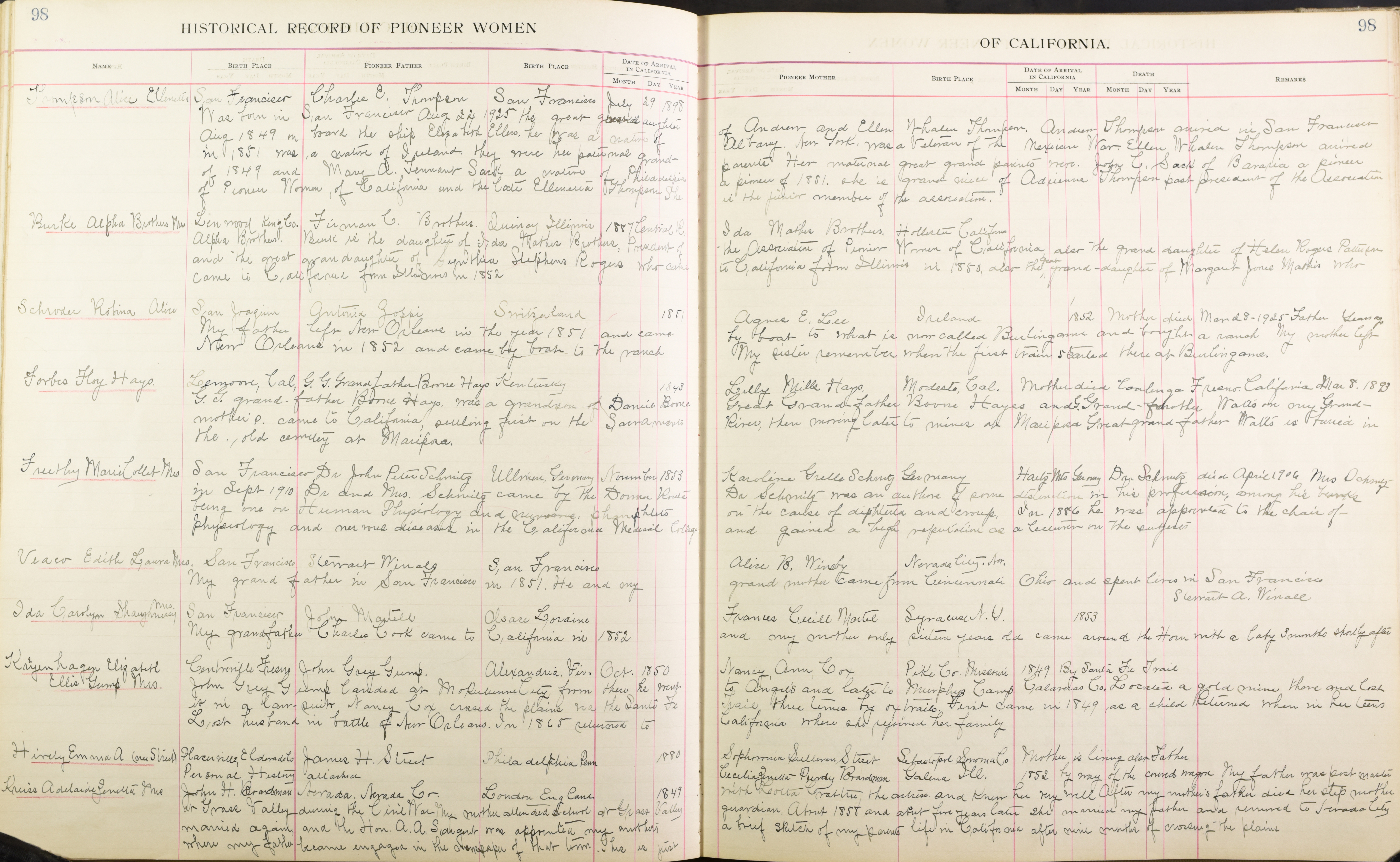 Remarks: Was born in San Francisco Aug 22, 1925, the great grand daughter of Andrew and Ellen Whalen Thompson. Andrew Thompson arrived in San Francisco Aug 1849 on board the ship Elizabeth Ellen. He was a native of Albany, New York. Was a veteran of the Mexican War. Ellen Whalen Thompson arrived in 1851, was a native of Ireland.  They were her paternal grand-parents. Her maternal great grand parents were John C. Sack of Bavaria, a pioneer of 1849,  and Mary A. Tennant Sack, a native of Philadelphia, a pioneer of 1851. She is grand niece of Adrianna Thompson past president of the Association of Pioneer Women of California and the late Ellsworth Thompson. She is the junior member of the association.

Remarks: Dr . and Mrs. Schnitz came by the Donner Route. Dr. Schnitz was an author of some distinction in his profession, among his books being one on Human Physiology and [illegible] phamphlets [sic] on the cause of diphtheria and croup. In 1886 he was appointed to the chair of physiology and nervous disorders in the California Medical College.

Remarks: My grandfather Charles Cook came to California in 1852 and my mother only sixteen years old came around the Horn with a baby, 3 months shortly after.

Remarks: John Grey Gump landed at [illegible] City, from there he went to Angel’s and later to Memphis Camp Calaveras Co. Located a gold mine there and lost [illegible] in a law-suit.  Nancy Cox crossed the plains via the Santa Fe Trail three times by ox trails. First came in 1849 as a child. Returned when in her teens. Lost husband in battle of New Orleans. In 1865 relocated to California where she rejoined her family.

Remarks: My father was postmaster of Grass Valley during the Civil War. My mother attended school at Grass Valley guardian. About 1858 and about five years later she married my father and moved to Nevada City where my father became engaged in the newspaper of that town. This is just a brief sketch of my parents life in California after nine months of crossing the plains.