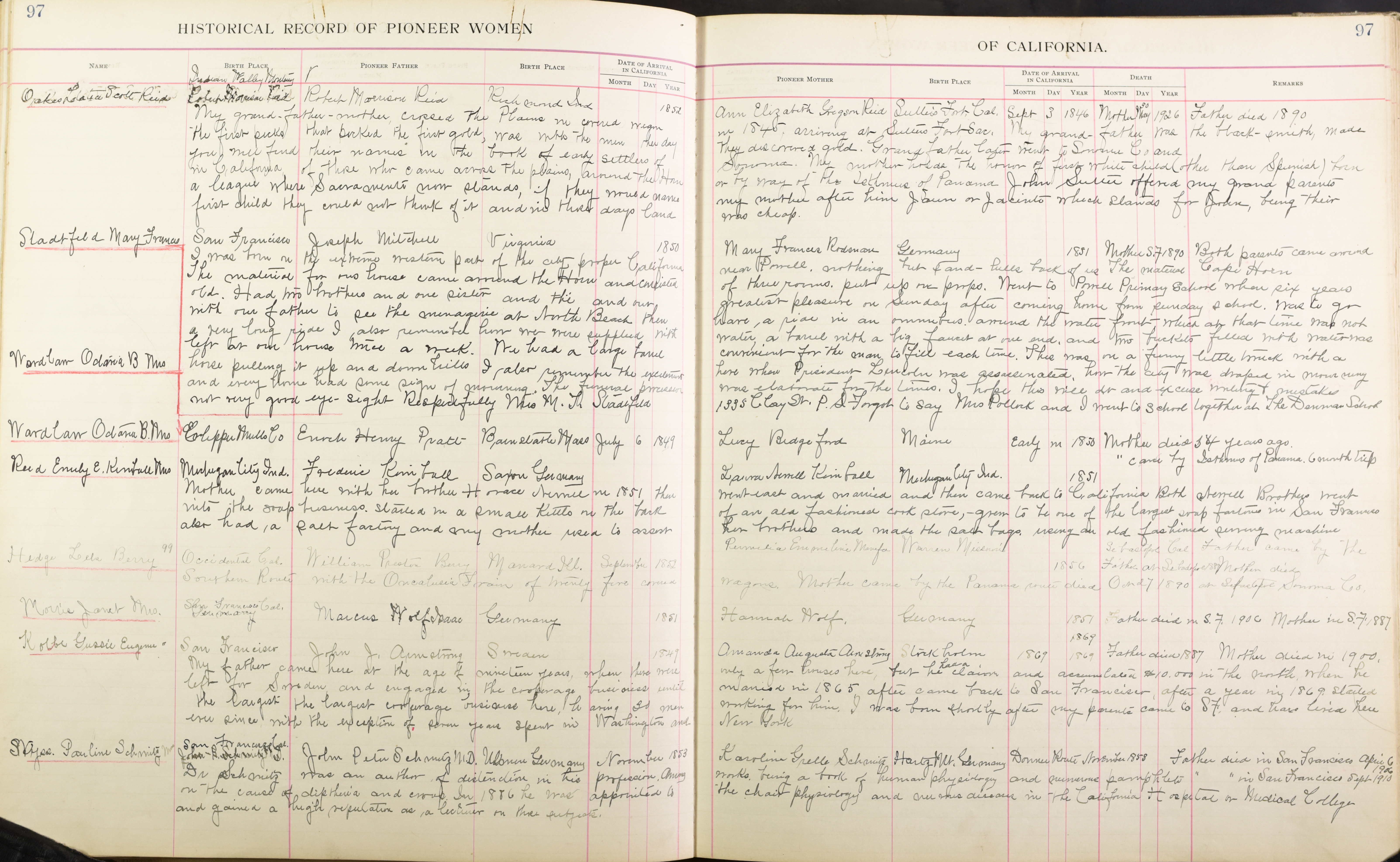 Remarks: Father died 1890. My grand-father-mother crossed the Plains in covered wagon in 1845, arriving at Sutters Fort, Sac. My grand-father was the black-smith, made the first picks that picked the first gold, was with the men the day they discovered gold. Grandfather later went to Sonoma Co and you will find their name in the book of early settlers of Sonoma. My mother holds the honor of first white child (other than Spanish) bornin California of those who came across the plains, around the Horn or by way of the Isthmus of Panama. John Sutter offered my grand parents a league where Sacramento now stands, if they would name my mother after him Jaun or Jacinto which stands for John, being their first child they could not think of it and in there days land was cheap.

Remarks: Both parents came around Cape Horn. I was born on the extreme western part of the city proper California near Powell. nothing but sand-dunes back of us. The material The material for our house came around the Horn and consisted of three rooms. put up on props. Went to Powell Primary School when six years old. Had two brothers and one sister and the and our greatest pleasure on Sunday after coming home from Sunday school was to go with our father to see the menagerie at North Beach then have a ride in an omnibus around the water front which at that time was not a very long ride. I also remember how we were supplied with water, a [illegible] with a big faucet at one end, and two buckets filled with water was left for our house once a week. We had a large sand [illegible] for the man to fill each time. This was in a funny little truck with a horse pulling it up and down hills. I also remember the excitement here when President Lincoln was assassinated, how the city was draped in mourning and every home had some sign of mourning. The funeral procession was elaborate for the times. I hope this will do and excuse writing + mistakes, not very good eye-sight. Respectfully Mrs M. F. Stadtfield.

Remarks: Mother came here with her brother Horace Newell in 1851 then went back and married and then came back to California. Both Newell Brothers went into the soap business. Started in a small Kettle in the back of an old fashioned cook store, -grew to be one of the largest soap factories in San Francisco. Also had a salt factory and my mother used it to assist her brothers and made the salt bags using an old fashioned sewing machine.

Remarks: My father came here at the age of nineteen years, when there were only a few houses here, for he had a claim and accumulated $10,000 in the north when he left for Sweden and engaged in the cooperage business until married in 1865. After came back to San Francisco, after a year in 1869, started the largest the largest cooperage business here, having 30 men working for him. I was born shortly after my parents came to S.F. and have lived here ever since, with the exception of seven years spent in Washington and New York.

Remarks: Dr Schmitz was an author of distention in his profession. Among works being a book of human physiology and numerous pamphlets on the causes of diptheria and croup. In 1886 he was appointed to the chair physiology and nervous disease in the California Hospital and Medical College and gained a high reputation as a lecturer on their subjects.