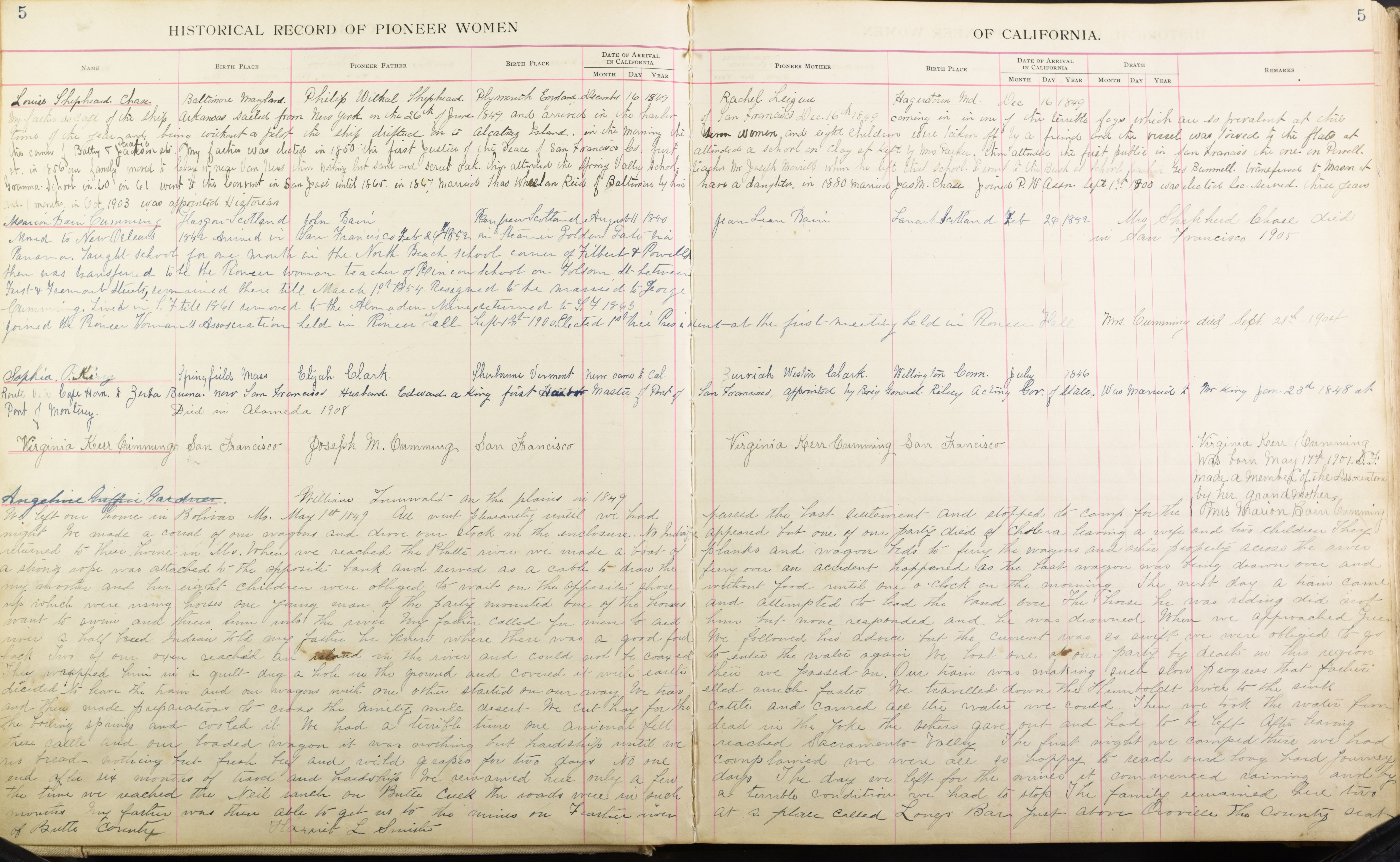 Remarks: My father as captain of the ship Arkansas sailed from New York on the 26th of June 1849 and arrived in the harbor of San Francisco December 16th 1849 coming in in one of the terrible fogs which are so prevalent at this time of year and being without a pilot the ship drifted on to Alcatraz Island. in the morning the seven women and eight children were taken off by a friend and the vessel was towed to the flats at the corner of Baltry and Pacific Jackson. My father was elected in 1850 the first Justice of the Peace of San Francisco Ca. First attended a school on Clay St. kept by Mrs. Parker. Then attended the first public in San Francisco the one on Powell St. in 1856 our family moved to Clay St. near Van Ness then nothing but sand and scrub oak. Then attended the Spring Valley school, teacher Mr. Joseph Merrill. When he left that school, I went to the Bush St. School  teacher Geo Burnell. Transferred to Mason St. Grammar School in ’60. In ’61 went to the Convent in San Jose until 1865. In 1867 married Thos. Wheelan Reid of Baltimore. By him have a daughter. In 1880 married Jas. M. Chase. Joined P.W. Assn. Sept. 1st 1900. Was elected Sec. Served three years and 1 month. In Oct 1903 was appointed historian.

Remarks: Moved to New Orleans in 1842. Arrived in San Francisco February 26, 1852 on the steamer Golden Gate via Panama. Taught school for one month in the North Beach School corner of Filbert and Powell. Then was transferred to be the Pioneer woman teacher of the Rincon school on Folsom St. between First and Fremont Streets. Remained there till March 10th 1854. Resigned to be married to George Cumming. Lived in S.F. till 1861 removed to the Almaden Mine, returned to S.F. 1863. Joined the Pioneer Women Association held in Pioneer Hall Sept. 1 st 1900. Elected 1st Vice President at the first meeting held in Pioneer Hall.

We left our home in Bolivar Mo. May 1st 1849. All went pleasantly until we had passed the last settlement and stopped to camp for the night. We made a corral of our wagons and drove our stock in the enclosure. No Indians appeared but one of our party died of Cholera leaving a wife and two children. They returned to their home in Mo. When we reached the Platte river we made a boat of planks and wagon beds to ferry the wagons and other property across the river. A strong rope was attached to the opposite bank and served as a cable to draw the ferry over. an accident happened as the last wagon was being drawn over and my mother and her eight children were obliged to wait on the opposite shore without food until one o’clock in the morning. The next day a train came up which were using horses. One young man of the party mounted one of the horses and attempted to lead the band over. The horse he was riding did not want to swim and threw him into the river. My father called for men to aid him but none responded and he was drowned. When we approached Green river, a half breed Indian told my father he knew where there was a good ford. We followed his advice but the current was so swift we were obliged to go back. Two of our oxen reached an island in the river and could not be coaxed to enter the water again. We lost one of our party by death in this region. They wrapped him in a quilt, dug a hole in the ground and covered it with earth. There we passed on. One train was was making such slow progress that father decided to have the train and our wagons with one other started on our way. We travelled much faster. We travelled down the Humboldt river to the sink and there made preparations to cross the ninety-mile desert. We cut hay for the cattle and canned all the water we could. There we took the water from the boiling springs and cooled it. We had a terrible time. One arrival fell dead in the lake. The others gave out and had to be left. After leaving those cattle and our loaded wagon it was nothing but hardship until we reached Sacramento Valley. The first night we camped there we had no bread. Nothing but fresh beef and wild grapes for two days No one complained we were all so happy to reach our long hard journey end of the six months of travel and hardship We remained here only a few days The day we left for the mines it commenced raining and by the time we reached the Neil ranch on Butte Creek the roads were in such a terrible condition we had to stop. The family remained there two months My father was then able to get us to the mines on Feather river at a place called Longs Bar just above Oroville the county seat of Butte County.  -Harriet L. Smith