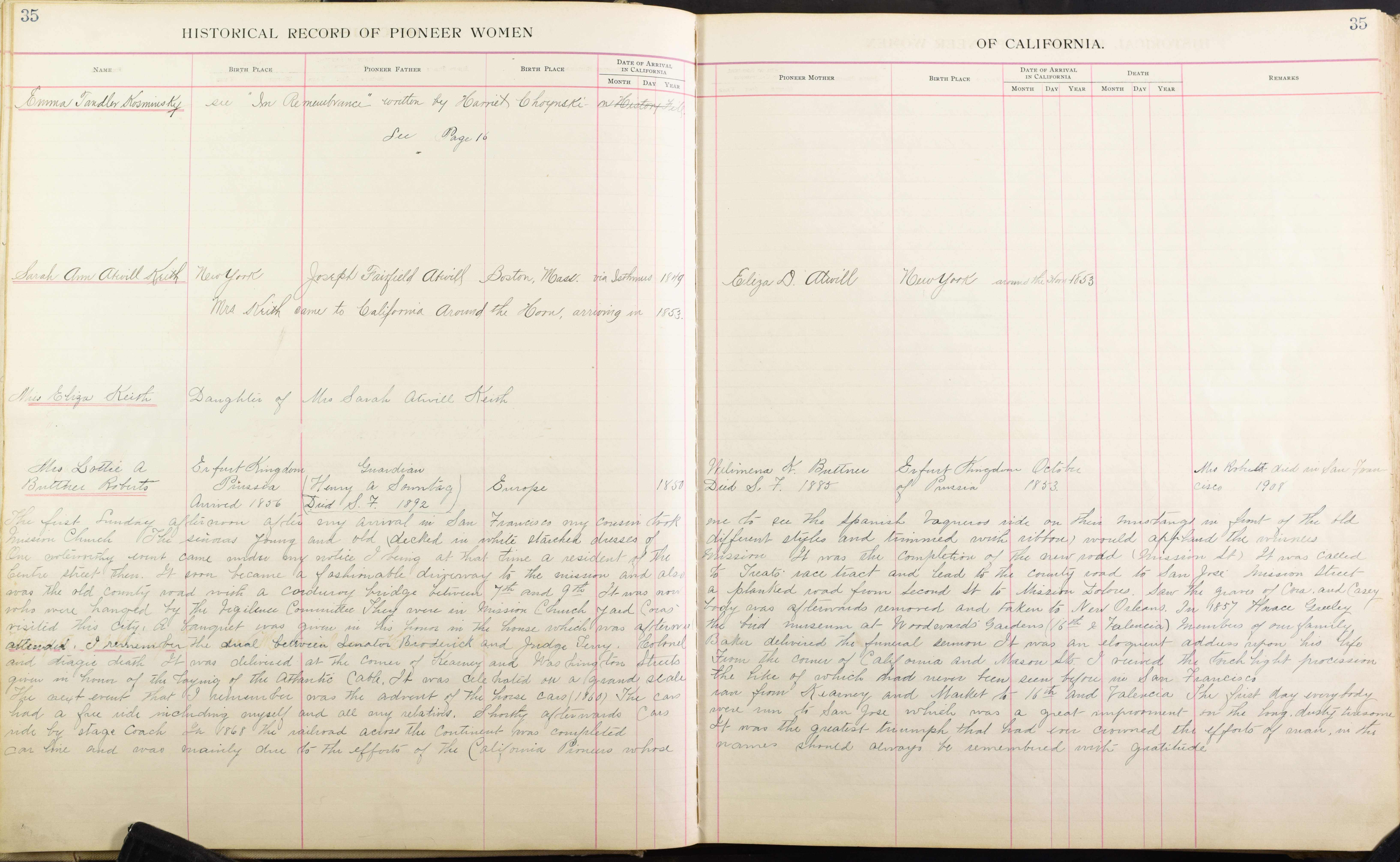 See “In Remembrance” written by Harriet Choymski on History File.

Remarks: Mrs. Keith came to California Around the Horn, arriving in 1853

Remarks: The first Sunday afternoon after my arrival in San Francisco my cousin took me to see the Spanish Vaqueros ride on their mustangs in front of the old Mission Church. The senoras young and old (decked in white starched dresses of different styles and trimmed with ribbon) would applaud the winners. One noteworthy event came under my notice I being  at that time a resident of the mission. It was the completion of the new road (Mission St). It was called Centre street then. It soon became a fashionable driveway to the mission and also to Treats’ race tract and lead to the country road to San Jose. Mission Street was the old country road with a cordway bridge between 7th and 9th it was now a planked wad from Second St to Mission Dolores. Saw the graves of Cora and Casey who were hanged by the Vigilence Committee. They were in Mission Church Yard. Cora’s body was afterwards removed and taken to New Orleans. In 1857 Horace Greeley visited this city. A banquet was given in his honor in the house which was afterward the bird museum at Woodward’s Gardens (16th and Valencia). Members of our family attended. I remember the dual between Senator Broderick and Judge Terry. Colonel Baker delivered the funeral sermon. It was an eloquent address upon his life and tragic death. It was delivered at the corner of Kearney and Washington Streets From the corner of California and Mason Sts. I received the torchlight procession given in honor of the laying of the Atlantic Cable. It was celebrated on a grand scale the like of which had never been seen before in San Francisco. The next event that I remember was the advent of the horse cars (1860). The cars ran from Kearney and Market to 16th and Valencia. The first day everybody had a free ride including myself and all my relations. Shortly afterwards Cars were run to San Jose which was a great improvement on the long, dusty, tiresome ride by stage coach. In 1868 the railroad across the Continent was completed. It was the greatest triumph that had ever crowned the efforts of man, in the car line and was mainly due to the efforts of the California Pioneers whose names should always be remembered with gratitude.