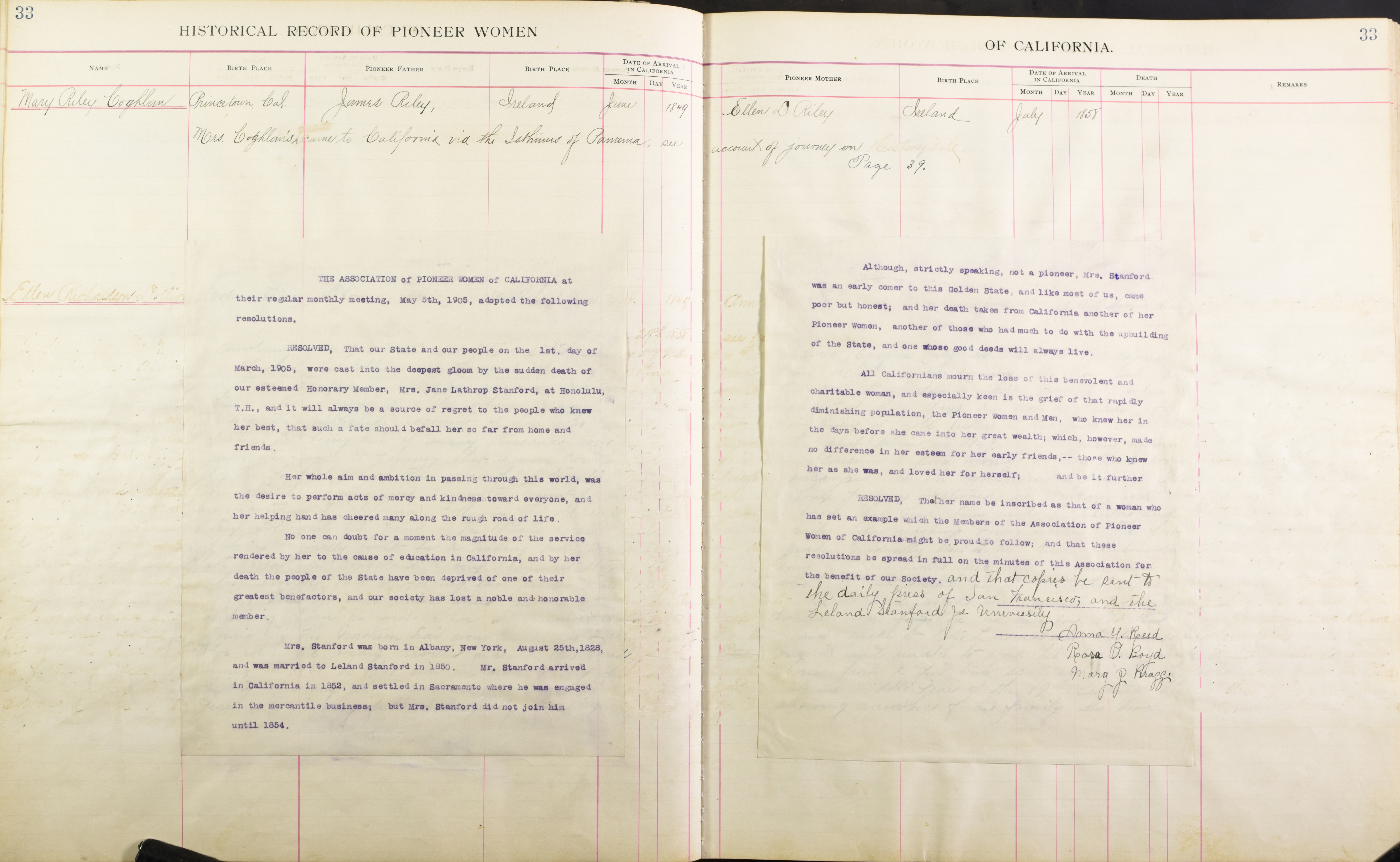 Remarks: Mrs. Coghlan came to California via the Isthmus of Panama. see account of journey on Page 39.

THE ASSOCIATION of PIONEER WOMEN of CALIFORNIA at their regular monthly meeting, May 5th, 1905 adopted the following resolutions.

RESOLVED, that our state and our people on the 1st day of March, 1905, were cast into deepest gloom by the sudden death of our esteemed Honorary Member, Mrs. Jane Lathorp Stanford, at Honolulu, T.H., and it will always be a source of regret to the people who knew her best, that such a fate would befall her so far from home and friends.

Her whole aim and ambition in passing through this world, was the desire to perform acts of mercy and kindness toward everyone, and her helping hand has cheered many along the rough road of life.

No one can doubt for a moment the magnitude of the service rendered by her to the cause of education in California, and by her death the people or the State have been deprived of one of their greatest benefactors, and our society has lost a noble and honorable member.

Mrs. Stanford was born in Albany, New York, August 25th, 1828 and was married to Leland Stanford in 1850. Mr. Stanford arrived in California in 1852, and settled in Sacramento where he was engaged in the mercantile business, but Mrs. Stanford did not join him until 1854.

Although, strictly speaking, not a pioneer, Mrs. Stanford was an early comer to this Golden State, and like most of us, came poor but honest; and her death takes from California another of her Pioneer Women, another of those who had much to do with the upbuilding of the State, and one whose good deeds will always live.

All Californians mourn the loss of this benevolent and charitable woman, especially keen is the grief of that rapidly diminishing population, the Pioneer Women and Men, who knew her in the days before she came into her great wealth; which, however, made no difference in her esteem for her early friends–those who knew her as she was, and loved her for herself; and be it further

RESOLVED that her name be inscribed as that of a woman who has set an example which the Members of the Association of Pioneer Women of California might be proud to follow; and that these resolutions be spread in full on the minutes of this Association for the benefit of our society. [handwritten] and that copies be sent to the daily press of San Francisco and the Leland Stanford Jr. University.