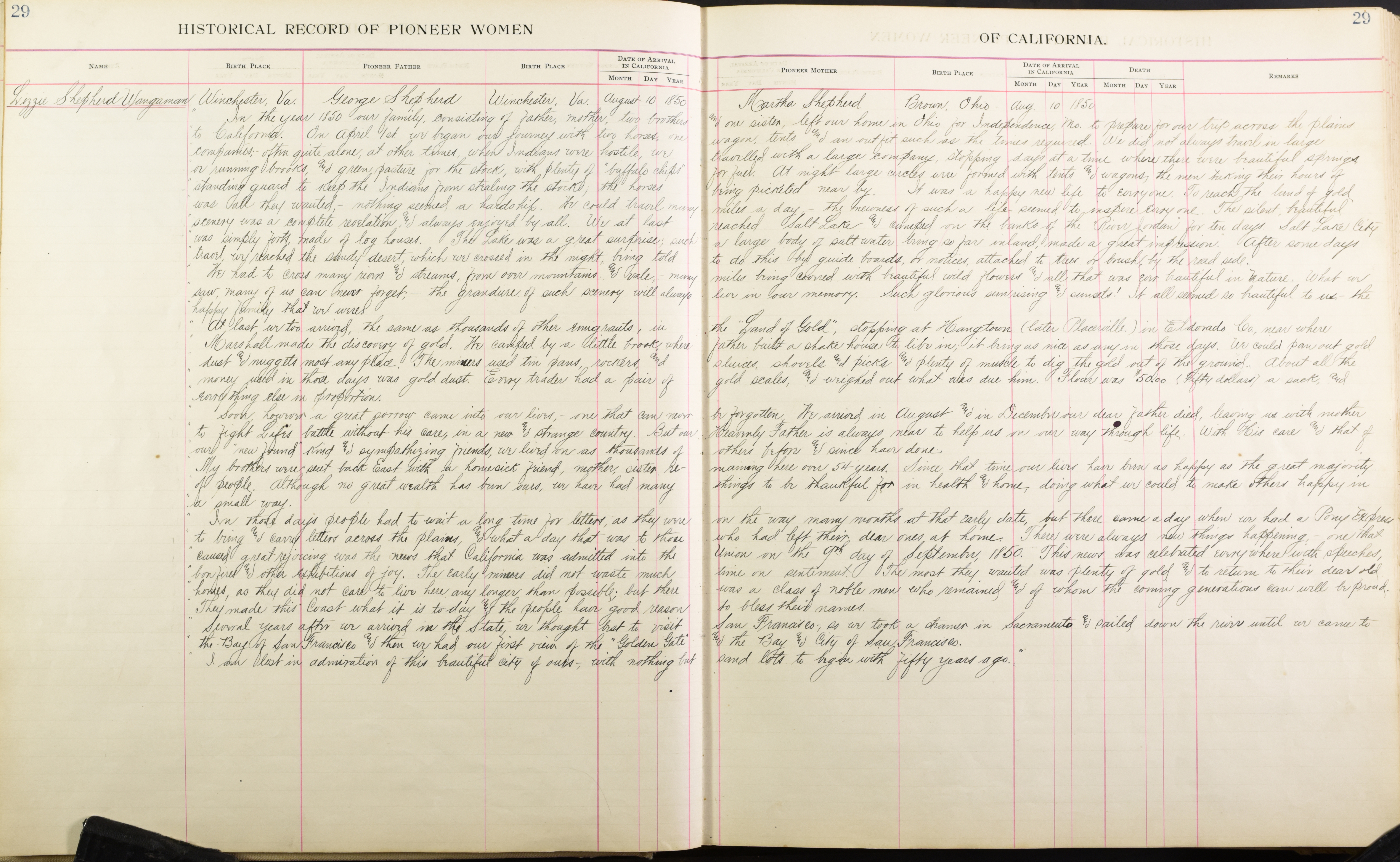 Remarks: In the year 1850 our family, consisting of father, mother, two brothers and one sister, left our home in Ohio for Independence, MO to prepare for our trip across the Plains to California. On April 1st we began our journey with two horses, one wagon, tents and an outfit such as the times required. We did not always travel in large companies, – often quite alone, at other times, when Indians were hostile, we travelled with a large company, stopping days at a time when there were beautiful springs, or running brooks and green pasture for the stock, with plenty of “buffalo chips” for fuel. At night large circles were formed with tents and wagons, the men taking their hours of standing guard to keep the Indians from stealing the stocks; the horses being picketed near by. It was a happy new life to everyone. To reach the land of gold was all they wanted, – nothing seemed a hardship. We could travel many miles a day, – The newness of such a life seemed to inspire every one. The silent, beautiful scenery was a complete revelation, and always enjoyed by all. We at last reached Salt Lake and camped on the banks of the “River Jordan” for ten days. Salt Lake City was simply forts made of log houses. The Lake was a great surprise; such a large body of saltwater being so far inland, made a great impression. After some days’ travel, we reached the sandy desert, which we crossed in the night, being told to do this by guide boards, or notices attached to trees or brush by the road side.

We had to cross many rivers and streams, from over mountains and vale, – many miles being covered with beautiful wild flowers and all that was ever beautiful in nature. What we saw, many of us can never forget; – the grandeur of such scenery will always live in our memory. Such glorious sun rising and sunsets! It all seemed so beautiful to us. – the happy family that we were.

At last we too arrived, the same as thousands of other immigrants, in the “Land of Gold,” stopping at Hangtown (later Placerville) in El Dorado Co. near where Marshall made the discovery of gold. We camped by a little brook where father built a shake house to live in; it being as nice as any in those days. We could paw out gold dust and nuggets most any place. The miners used tin pans, rockers, and sluices, shovels, and picks and plenty of muscle to dig the gold out of the ground. About all the money used in those days was gold dust. Every trader had a pair of gold scales, and weighed out what was due him. Flour was $50.00 (fifty dollars) a sack, and everything else in proportion.

Soon, however a great sorrow came into our lives, – one that can never be forgotten. We arrived in August and in December dear father died, leaving us with mother to fight Life’s battle without his care, in a new and strange country. But our Heavenly Father is always near to help us on our way through life. With His care and that of our “new found” kind and sympathizing friends, we lived on as thousands of others before and since have done.

My brothers were sent back east with a homesick friend, mother, sister, remaining here over 54 years. Since that time our lives have been as happy as the great majority of people. Although no great wealth has been ours, we have had many things to be thankful for in health and home, doing what we could to make others happy in a small way.

In those days’ people had to wait a long time for letters, as they were on the way many months at that early date., but there came a day when we had a Pony Express to bring and carry letters across the plains, and what a day that was to those who had left their dear ones at home. There were always new things happening, – one that caused great rejoicing was the news that California was admitted into the Union on the 9th day of September, 1850. This news was celebrated everywhere with speeches, bonfires, and other celebrations of joy. The early miners did not waste much time on sentiment. The most they wanted was plenty of gold and to return to their dear old homes, as they did not care to live here any longer than possible; but there was a class of noble men who remained and of whom the coming generations can well be proud. They made this coast what it is to-day and the people have good reason to bless their names.

Several years after we arrived the State , we thought best to visit San Francisco, so we took a steamer to Sacramento and sailed down the river until we came to the Bay of San Francisco and then we had our first view of the “Golden Gate” and the Bay and City of San Francisco. I am lost in admiration of this beautiful city of ours, – with nothing but sand lots to begin with fifty years ago.