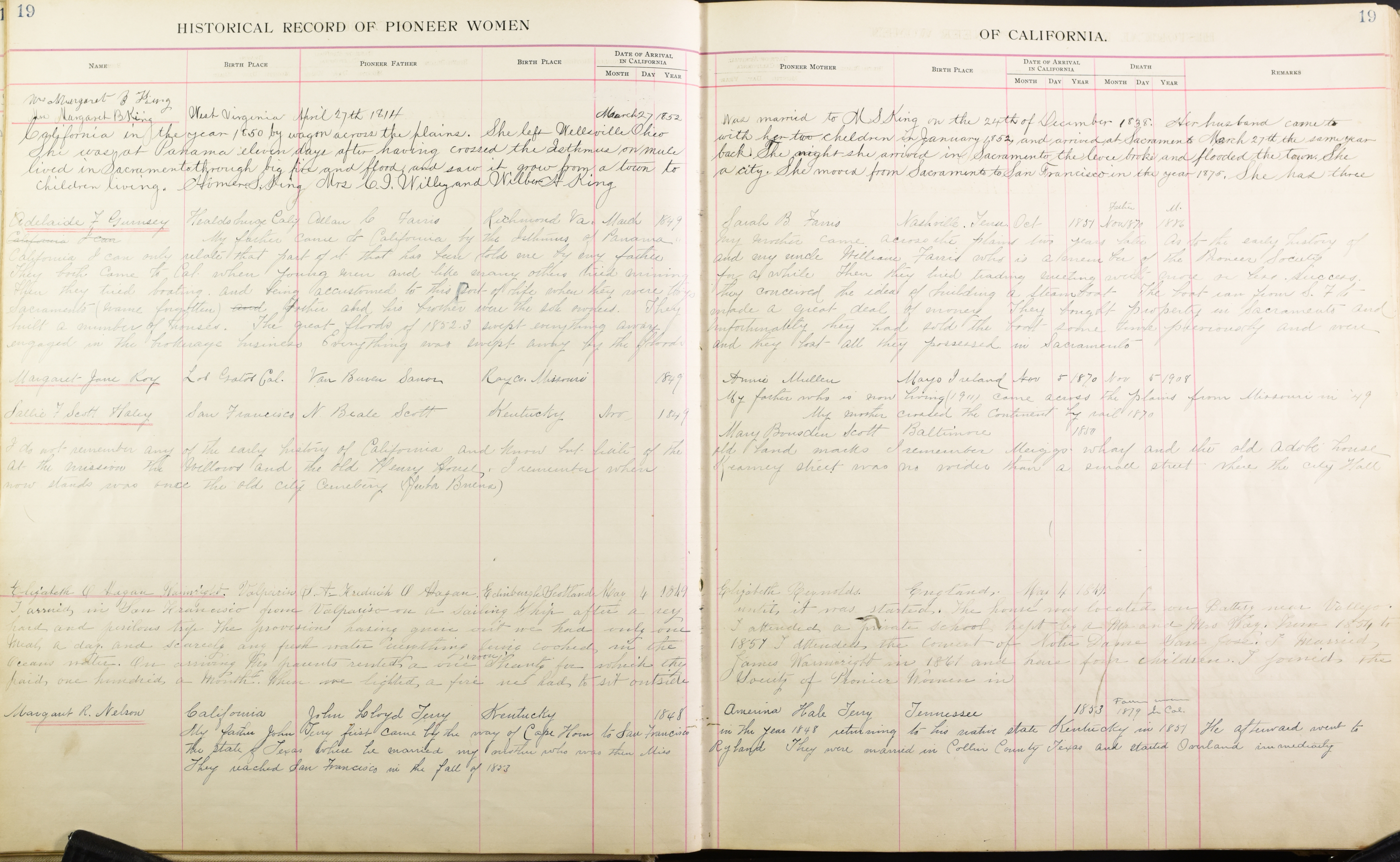 Remarks: Arrived March 27, 1852. Was Married to MS King on the 24th of December 1838. Her husband came to California in the year 1850 by wagon across the plains. She left Wellsville Ohio with her two children in January 1852, and arrived at Sacramento March 27th the same year. She was at Panama eleven days after having crossed the isthmus on mule back. The night she arrived in Sacramento the levee broke and flooded the town. She lived in Sacramento through big fire and flood, and saw it grow from a town to a city. She moved from Sacramento to San Francisco in the year 1875. She has three children living. Homer S. King, Mrs. C.J Willey and Wilber H. King.

My father came to California by the Isthmus of of Panama. My mother came across the plains two years later. As to the early history of California I can only relate that part of it that has been told me by my father and my uncle William Farris who is  a member of the Pioneer Society. They both came to Cal. when young men and like many others tried mining for a while then they tried trading meeting with more or less success. After they tried boating and being accustomed to this sort of life when they were boys, they conceived the idea of building a steamboat. The boat ran from S.F to Sacramento (name forgotten). Father and his brother were the sole owners. They made a great deal of money. They bought property in Sacramento and built a number of houses. The great floods of 1852-3 swept everything away. Unfortunately they had sold the boat some time previously and were engaged in the brokerage business. Everything was swept away by the floods and they lost all they possessed in Sacramento.

Remarks: My father is now living (1911) came across the plains from Missouri in ’49. My mother crossed the continent by rail 1870.

Remarks: I do not remember any of the history of California and know but little of the old landmarks. I remember Meiggs Warf and the old adobe house at the mission and the old Henry House. I remember when Kearney Street was no wider than a small street where the city Hall now stands was once the old city cemetery (Yerba Buena).

Remarks: I arrived in San Francisco from Valparaiso on a sailing ship after a very hard and perilous trip. The provisions having given out, we had only one meal a day and scarcely any fresh water everything being cooked  in the ocean’s water. On arriving, my parents rented a one room shanty for which they paid one hundred a month. When we lighted a fire we had to sit outside until it was started. The home was located on Battery near Vallejo. I attended a private school kept by a Mr. and Mrs. Way. From 1854 to 1857  I attended the convent of Notre Dame San Jose. I married James Wainwright in 1861 and have four children. I joined the Society of Pioneer Women in [remarks end]

My father John Terry first came by the way of Cape Horn to San Francisco in the year 1848 returning to his native state Kentucky in 1851. He afterward went to the state of Texas where he married my mother who was then Miss Ryland. They were married in Collin County Texas and started Overland immediately. They reached San Francisco in the fall of 1853.