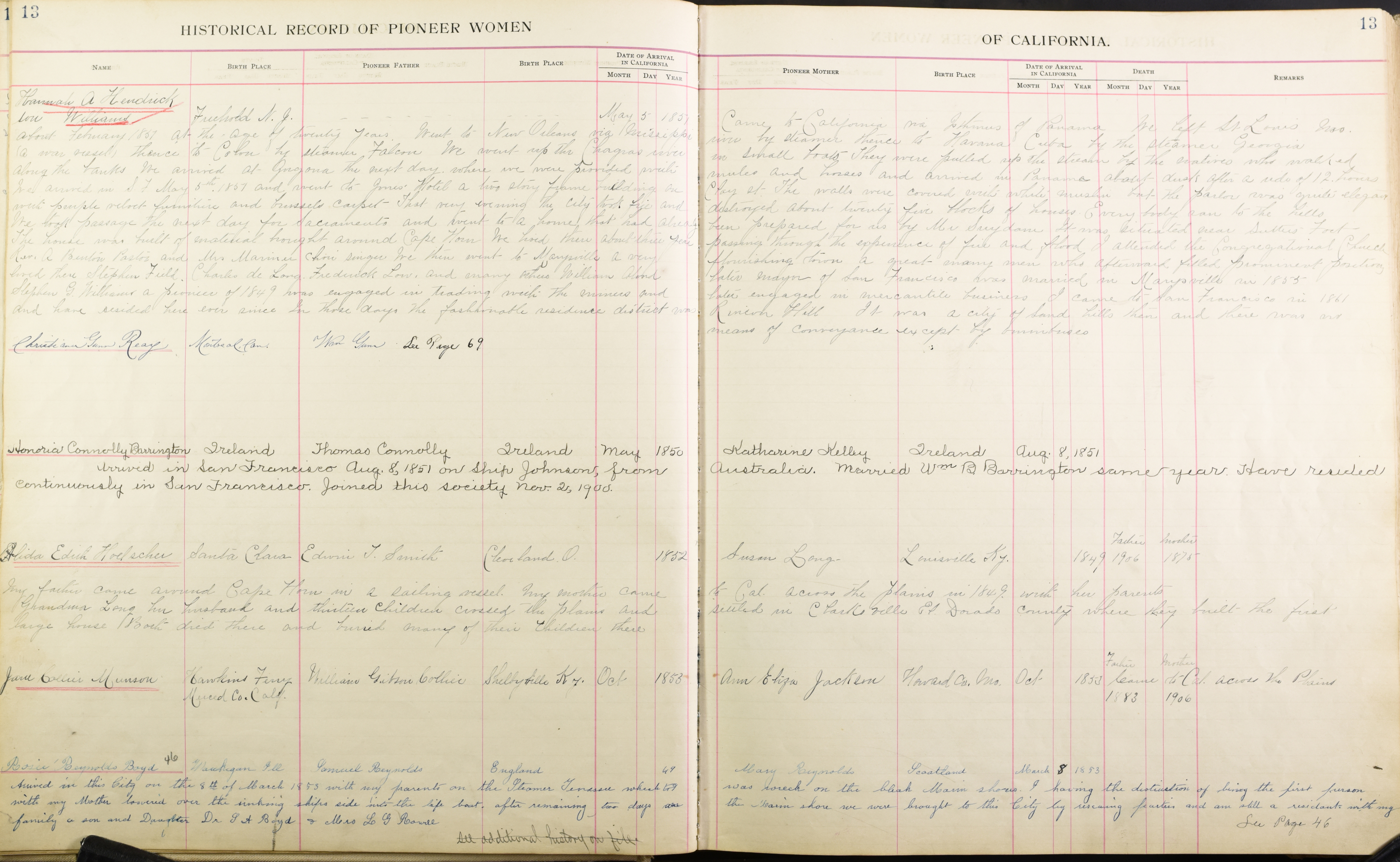 Came to California via Isthmus of Panama. We left St. Louis, Mo. about February 1851 at the age of twenty years. Went to New Orleans via Mississippi River by steamer thence to Havana, Cuba by the steamer Georgia (a war vessel) thence to Colon by steamer Falcon. We went up the Chagres river in small boats. They were pulled up the stream by the natives who walked along the banks. We arrived at Gorgona the next day where we were provided with mules and horses and arrived in Panama about dusk after a ride of 12 hours. We arrived in S.F. May 5th, 1851 and went to Jones’ Hotel a two story frame building on Clay Street. The walls were covered with white muslin but the parlor was quite elegant with purple velvet furniture and brussels carpet – That very evening the city took fire and destroyed about twenty five blocks of houses. Every body ran to the hills. We took passage the next day for Sacramento and went to a home that had already been prepared for us by Mr. Suydam – It was situated near Sutter’s Fort. The house was built of material brought around Cape Horn. We lived there about three years passing through the experience of fire and flood. I attended the Congregational Church, Rev. A. Benton Pastor and Mrs. Mariner choir singer. We then went to Marysville a very flourishing town a great many men who afterward filled prominent positions, lived there. Stephen Field, Charles de Long, Frederick Low, and many others. William Alvord later mayor of San Francisco was married in Marysville in 1855.

Stephen G. Williams a pioneer of 1849 was engaged in trading with the mines and later engaged in mercantile business. I came to San Francisco in 1861 and have resided here ever since. In those days the fashionable residence district was Rincon Hill. It was a city of sand hills then and there was no means of conveyance except by omnibus.

Remarks: My father came around Cape Horn in a sailing vessel. My mother came to Cal. Across the plains in 1849 with her parents. Grandma Long, her husband, and thirteen children crossed the plains and settled in Clarksville, El. Dorado county where they built the first large house. Both died there and buried many of their children there.

Remarks:  Came to Cal. across the Plains.

Remarks: Arrived in this City on the 8th of March 1853 with my parents on the Steamer Tennessee which was wreck on the bleak Marin shores. I having the distinction of being the first person with my mother lowered over the sinking ships side into the life boat. After remaining two days on the Marin shore we were brought to this City by rescuing parties and am still a resident with my family, a son and daughter. Dr. T. A. Boyd and Mrs. L. G. Rowell.