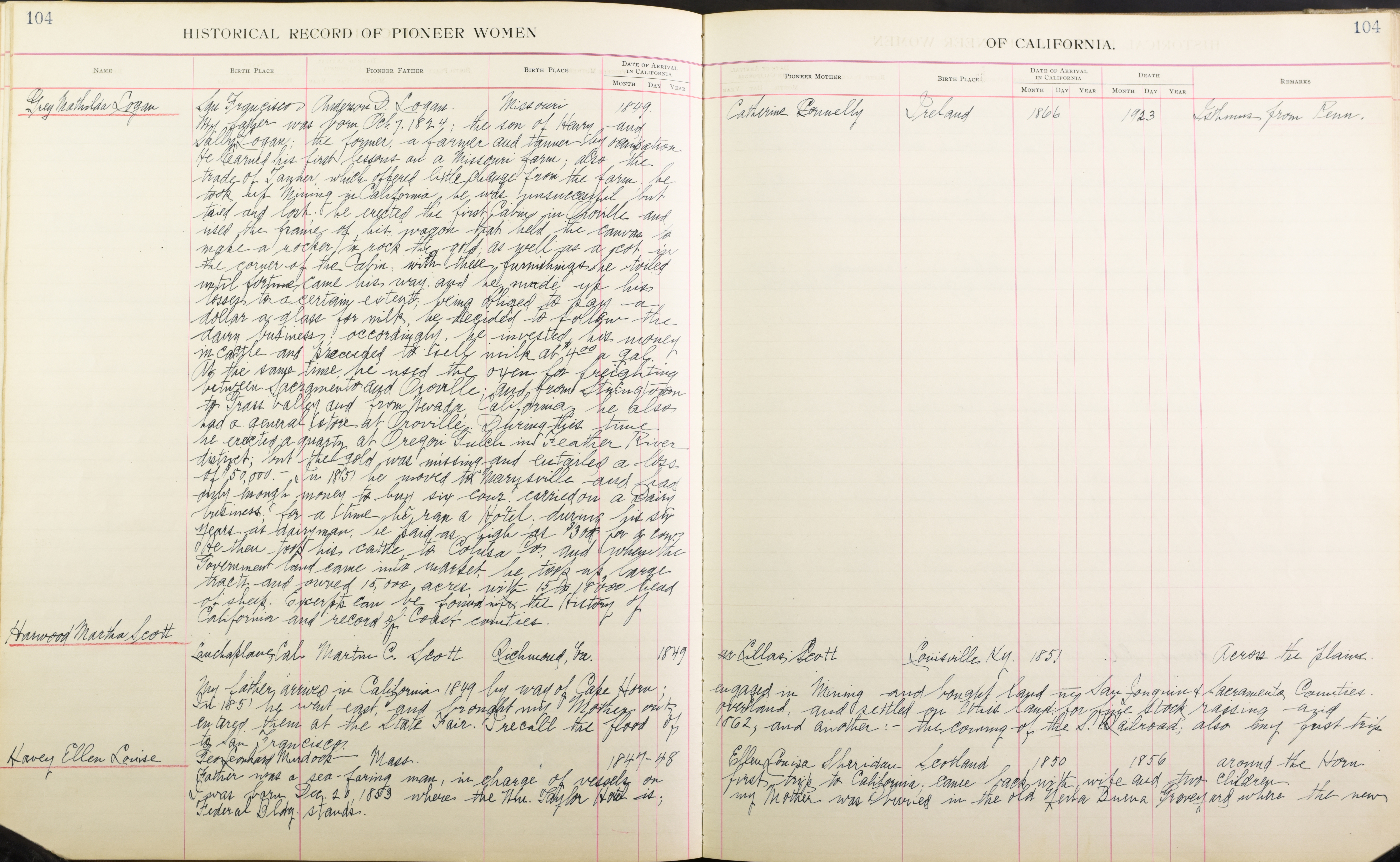 My father was born Oct 7, 1824; the son of Henry and Sally Logan; the former a farmer and tanner by occupation. He learned his first lessons on a Missouri farm; also the trade of Tanner, which offered little change from the farm; he took up Mining in California. he was unsuccessful but tried and lost; he erected the first Cabin in Oroville and used the frame of his wagon that held the canvas to make a rocker to rock the gold, as well as a cot in the corner of the Cabin. with these furnishings he toiled until fortune came his way, and he made up his losses to a certain extent, being obliged to pay a dollar a glass for milk, he decided to follow the dairy business; accordingly, he invested his money in cattle and proceeded to sell milk at $4.00 a gal. At the same time, he used the oxen for freighting between Sacramento and Oroville, and from Stringtown to Grass Valley and from Nevada, California; he also had a general store at Oroville. During this time he erected a quarty at Oregon Gulch in Feather River district; but the gold was missing and entailed a loss of $50,000. In 1851 he moved to Marysville and had only enough money to buy six cows. Carried on a Dairy business; for a time, he ran a Hotel; during his six years as dairyman, he paid as high as $300 for a cow. He then took his cattle to Colusa Co. and when the Government land came into market, he took up large track and owned 15,000 acres, with 15 to 18,000 head of sheep. Excerpts can be found with the History of California and record of Coast counties.

Remarks: My father arrived in California 1849 by way of Cape Horn; engaged in Mining and bought land in San Joaquin of Sacramento Counties. In 1851 he went east and brought my Mother out overland, and settled on this land; for live stock raising and entered them at the State Fair. I recall the flood of 1862, and another – the coming of the S.F. Railroad; also my first trip to San Francisco.

Remarks: Father was a sea-faring man, in charge of vessels on first trip to California. Came back with wife and two children. I was born Dec. 20, 1853 where the Hm. Taylor Hotel is; my Mother was buried in the old Yerba Buena Groves and where the new Federal Bldg. stands