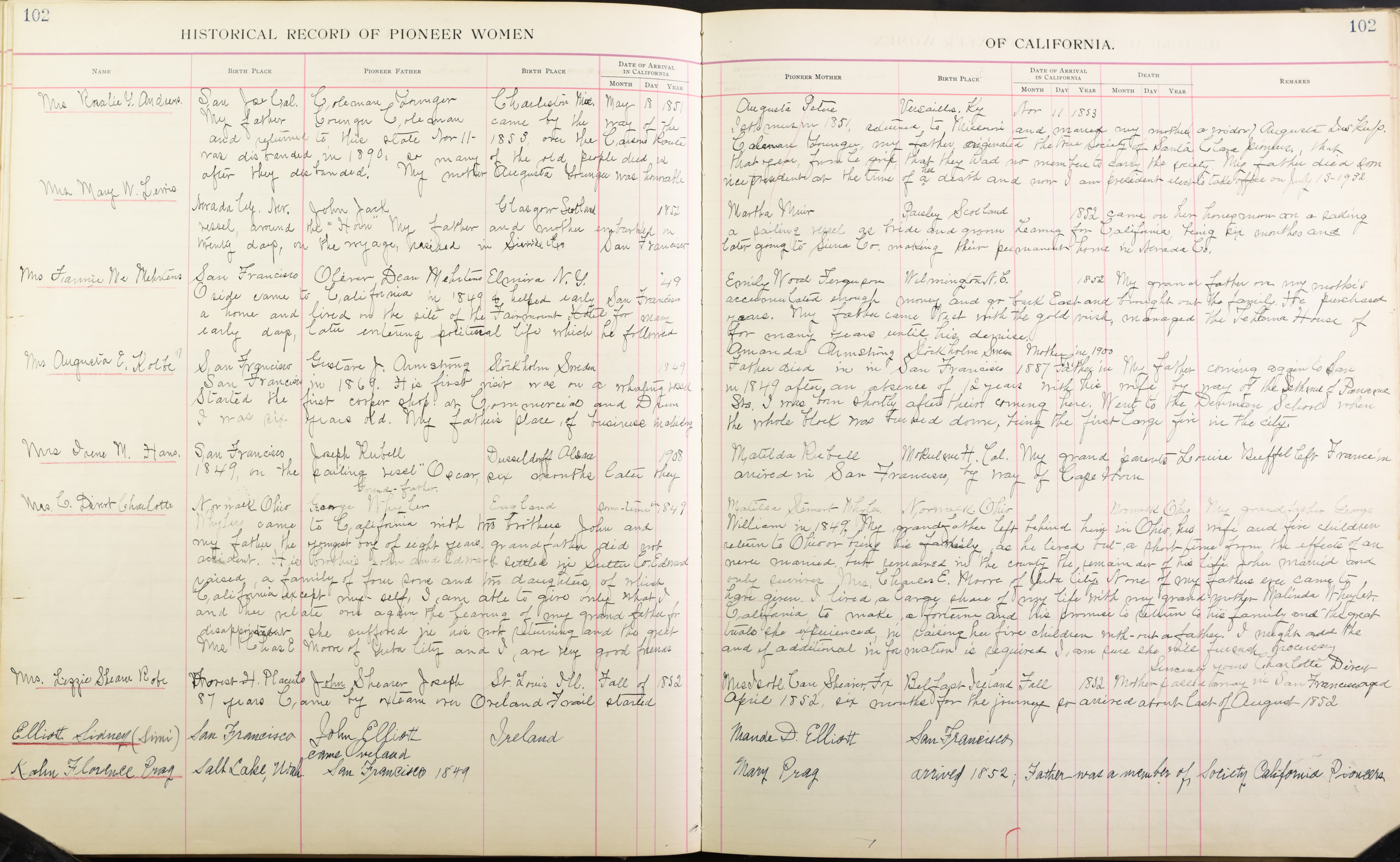 Remarks: My father Younger Coleman came by the way of the Isthmus in 1851, returned to Missouri and married my mother (a widow) Augusté DuKulp and returned to the state Nov. 11, 1853 over the Carson Route.  Coleman Granger, my father, originated the [illegible] Society of Santa Clara Pioneers that was disbanded in 1890. So many of the old people died in this year from the grip that they had no members to carry the society. My father died soon after they disbanded. My mother Augusté Younger was honorable vice president at the time of her death and I am president elect taking office on July 13, 1932.

Remarks: My father and mother embarked on a sailing vessel as bride and groom leaving for California, being six months and twenty days on the voyage, resided in San Francisco going later to Sierra Co. making their permanent home in Nevada Co.

Remarks: My grandfather on my mother’s side came to California in 1849 + helped early San Francisco, accumulated enough money and go back East and brought out the family. He purchased a home and lived on the site of the Fairmont Hotel for many years. My father came West with the gold rush, managed the Tehama House of early days, later entering political life which he followed for many years until his demise.

Remarks: My father coming again to San Francisco in 1869. His first visit was on a whaling vessel in 1849 after an absence of 12 years with his wife by way of the Isthmus of Panama.  Started the first copper shop at Commercial and Drum Sts. I was born shortly after their coming here. Went to Denman School when I was six years old. My father’s place of business including the whole block was burned down, being the first large fire in the city.

Remarks: My grand-father George Whyler came to California with his brothers John and William in 1849. My grand-father left behind him in Ohio, his wife and five children, my father the youngest boy of eight years. Grand-father did not return to Ohio or bring his family, as he lived but a short time from the effects of an accident. His brothers John and Edward settled in Sutter Co. Edward never married but remained in the county the remainder of his life. John married and raised a family of four sons and two daughters, of which only survive Mrs. Charles E. Moore of Yuba City.  None of my fathers ever came to California except myself. I am able to give only what I have given. I lived a large share of my life with my grand-mother Malinda Whyler and her [illegible] was again the leaving of my grand-father for California to make a fortune and his promise to return to his family and the great disappointment she suffered in his not returning and the great trials she experienced in raising her five children with-out [sic] a father. I might add the Mrs. Charles E. Moore of Yuba City and I are good friends and if additional information is required I am sure she will [illegible] [illegible]. Sincerely yours, Charlotte Dinert

Remarks: Came by oxteam [sic] over Overland Trail, started April 1852, six months for the journey so arrived about last of August 1852.

Remarks: Father was a member of Society California Pioneers