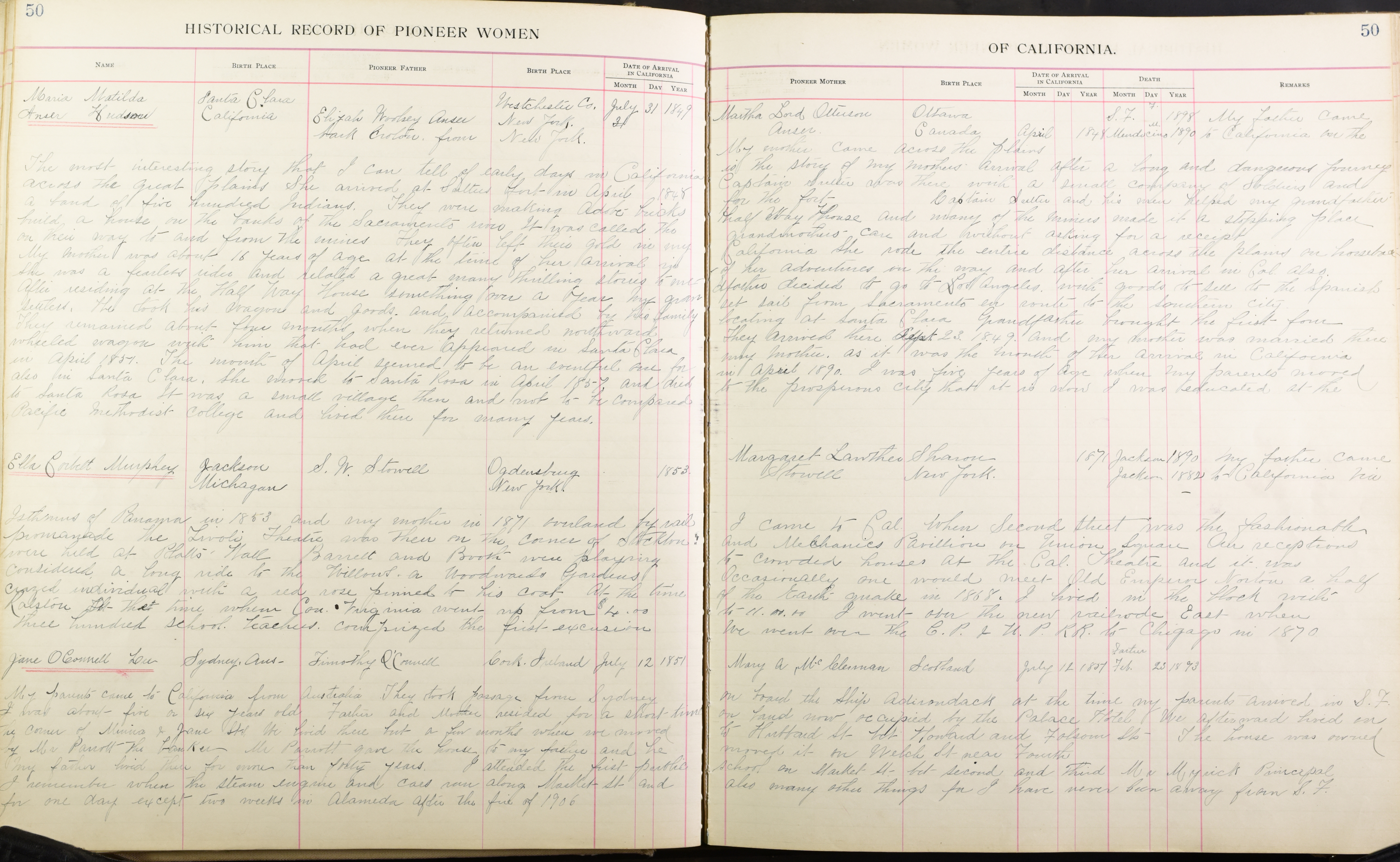 Remarks: My mother came across the plains  My father came to California on the bark Croton from New York

The most interesting story that I can tell of early days in California is the story of my mothers arrival after a long and dangerous journey across the great plains  She arrived at Sutters Fort in April 1848  Captain Sutter was there with a small company of Soldiers and a band of five hundred Indians.  They were making Adobe bricks for the fort  Captain Sutter and his men helped my grandfather build a house on the banks of the Sacramento river. It was called the Half Way House and many of the miners made it a stopping place on their way to and from the mines  They often left their gold in my grandmother’s care and without asking for a receipt

My mother was about 16 years of age at the time of her arrival in California  She rode the entire distance across the plains on horseback.  She was a fearless rider and related a great many thrilling stories to me of her adventures on the way and after her arrival in Cal. also.  After residing at the Half Way House something over a year my grandfather decided to go to Los Angeles with goods to sell to the Spanish settlers. He took his wagon and goods and accompanied by his family set sail from Sacramento en route to the Southern City. They remained about four months when they returned northward locating at Santa Clara  Grandfather brought the first four wheeled wagon with him that had ever appeared in Santa Clara. They arrived there Sept. 23, 1849 and my mother was married there in Apirl [sic] 1851.  The month of April seemed to be an eventful one for my mother, as it was the month of her arrival in California also in Santa Clara.  She moved to Santa Rosa in April 1857 and died April 1890. I was five years of age when my parents moved to Santa Rosa  It was a small village then and not to be compared to the prosperous city that it is now. I was educated at the Pacific Methodist College and lived there for many years.

Remarks: My father came to California via Isthmus of Panama in 1853 and my mother in 1871 overland by rail. I came to Cal. when Second Street was the fashionable promanade [sic].  The Tivoli Theatre was then on the corner of Stockton and Mechanics Pavillion on Union Square. Our receptions were held at Platts Hall  Barrett and Booth were playing to crowded houses at the Cal. Theatre and it was considered a long ride to the [illegible] Gardens. Occasionally one would meet Old Emperor Norton a half crazed individual with a red rose pinned to his coat. At the time of the Earth quake in 1868, I lived in the block with Ralston.  The time when Con. Virginia went up $4.00 to 11.00.00  I went over the new railrode [sic] East when three hundred school teachers comprized [sic] the first excusion [sic].  We went over the C.P. &[illegible] U.P.R.R. to Chicago in 1870

Remarks: My parents came to California from Australia  They took passage from Sydney on board the Ship Adirondack at the time my parents arrived in S.F. I was about five or six years old  Father and Mother resided for a short time on land now occupied by the Palace Hotel. We afterward lived on the corner of Minna & Jane St.  We lived there but a few months when we moved to Hubbard St bet. Howard and Folsom Sts.  The house was owned by Mr Parrott the banker. Mr Parrott gave the house to my father and he moved it on Welch St near Fourth. My father lived there for more than forty years. I attended the first public school on Market St. bet. Second and Third. Mr Myrick Principal. I remember when the steam engine and cars ran along Market St and also many other things for I have never been away from S.F. for one day except two weeks in Alameda after the fire of 1906.