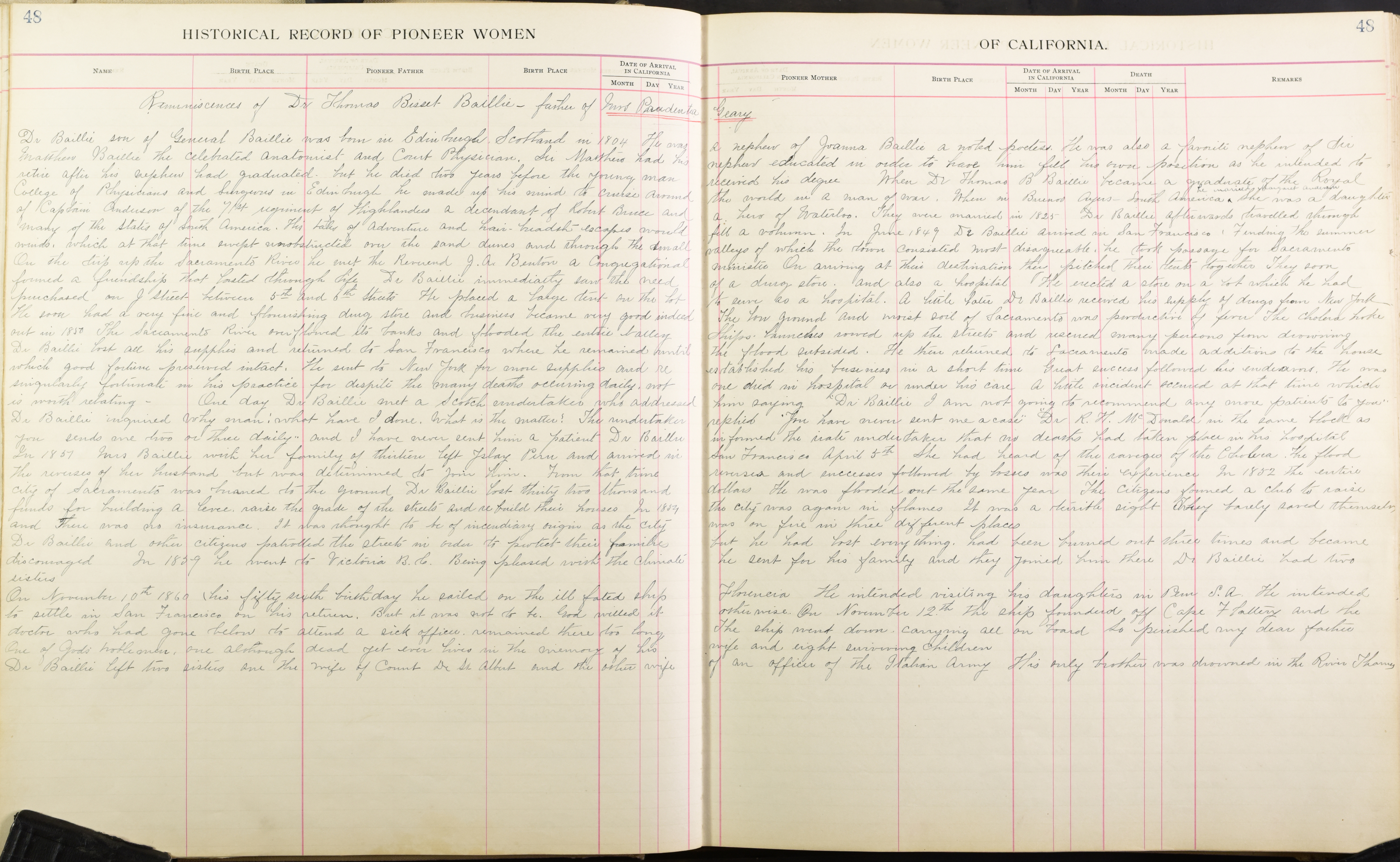 Dr. Baillie son of General Baillie was born in Edinburgh, Scotland in 1804. He was a nephew of Joanna Baillie a noted poetess. He was also a favorite nephew of Sir Matthew Baillie the celebrated anatomist and Court Physician . Sir Matthew had his nephew educated in order to have him fill his own position as he intended to retire after his nephew had graduated, but he died  two years before the young received his degree. When Dr. Thomas B. Baillie became a graduate of the Royal College of Physicians and Surgeons in Edinburgh he made up his mind to cruise around the world in a man of war. When in Buenos Ayers – South America, he married Margaret Anderson. She was a daughter of Captain Anderson of the 71st Regiment of Highlanders a descendant of Robert Bruce and a hero of Waterloo. They were married in 1825. Dr. Baillie afterwards travelled through many of the states of South America. His tales of adventure and [illegible] escapes would fill a volumn. In June 1849 Dr. Baillie arrived in San Francisco, finding the summer winds , which at the time swept unobstructed over the sand dunes and through the small valleys of which the town consisted most disagreeable. He took passage for Sacramento. On the trip up the Sacramento River he met the Reverend J.A. Benton a Congregational minister. On arriving at their destination they pitched their tents together. They soon formed a friendship that lasted through life. Dr. Baillie immediately saw the need of a drug store and also a hospital. He erected a store on a lot which he had purchased on J Street between 5th and 6th Streets. He placed a large tent on the lot to serve as a hospital. A little later Dr. Baillie received his supply of drugs from New York. He soon had a very fine and flourishing drug store, and business became very good indeed. The low ground  and moist soil of Sacramento was productive of fever. The cholera broke out in 1850. The Sacramento River overflowed its banks and flooded the entire valley. Ships’ launches rowed up the streets and rescued many persons from drowning. Dr. Baillie lost all his supplies and returned to San Francisco where he remained until the flood subsided. He then returned to Sacramento made additions to the house which good fortune preserved intact. He sent to New York for more supplies and reestablished his business in a short time. Great success followed his endeavors. He was singularly fortunate in his practice for despite the many deaths occurring daily, not one died in hospital or under his care. A little incident occurred at that time which is worth relating – One day Dr. Baillie met a Scotch undertaker who addressed him saying, “Dr. Baillie I am not going to recommend any more patients to you.” Dr. Baillie inquired  Why man: what have I done. What is the matter? The undertaker replied, “You have never sent me a case.” “Dr. R.H. McDonald in the same block as you sends me two or three daily,” and I have never sent him a patient Dr. Baillie informed the irate undertaker that no deaths had taken place in his hospital. In 1857 Mrs. Baillie with her family of thirteen left Islay Peru and arrived in San Francisco April 5th. She had heard of the raveges [sic] of the Cholera. The flood [illegible] of her husband  but was determined to join him. From that time reverses and successes followed by horses was their experience. In 1852 the entire city of Sacramento was burned to  the ground. Dr. Baillie lost thirty two thousand dollars. He was flooded out the same year . The citizens found a club to raise funds for building a levee, raise the grade of the streets, and rebuild their houses. In 1854 the city was again in flames. It was a terrible sight. They barely saved thousands and there was no insurance. It was thought to be of incendiary origin as the city was on fire in three different places. Dr. Baillie and other citizens patrolled the streets in order to protect their families but he had lost everything. Had been burned out three times and became discouraged. In 1859 he went to Victoria B.C. Being pleased with the climate he sent for his family and they joined him there. Dr. Baillie had two sisters.

On November 10th 1860, his fifty sixth birthday he sailed on the ill-fated ship Florencia. He intended visiting his daughters in Peru S.A. He intended to settle in San Francisco on his return. But it was not to be. God willed it otherwise. On November 12th the ship foundered off Cape Flattery and the doctor who had gone below to attend a sick officer, remained there too long. The ship went down, carrying all on board. So perished my dear father. One of God’s noblemen, one although dead yet ever lives in the memory of his wife and eight surviving children. Dr. Baillie left two sisters one the wife of Count Dr. St. Albert and the other wife of an officer of the Italian Army. His only brother was drowned in the River Thames.