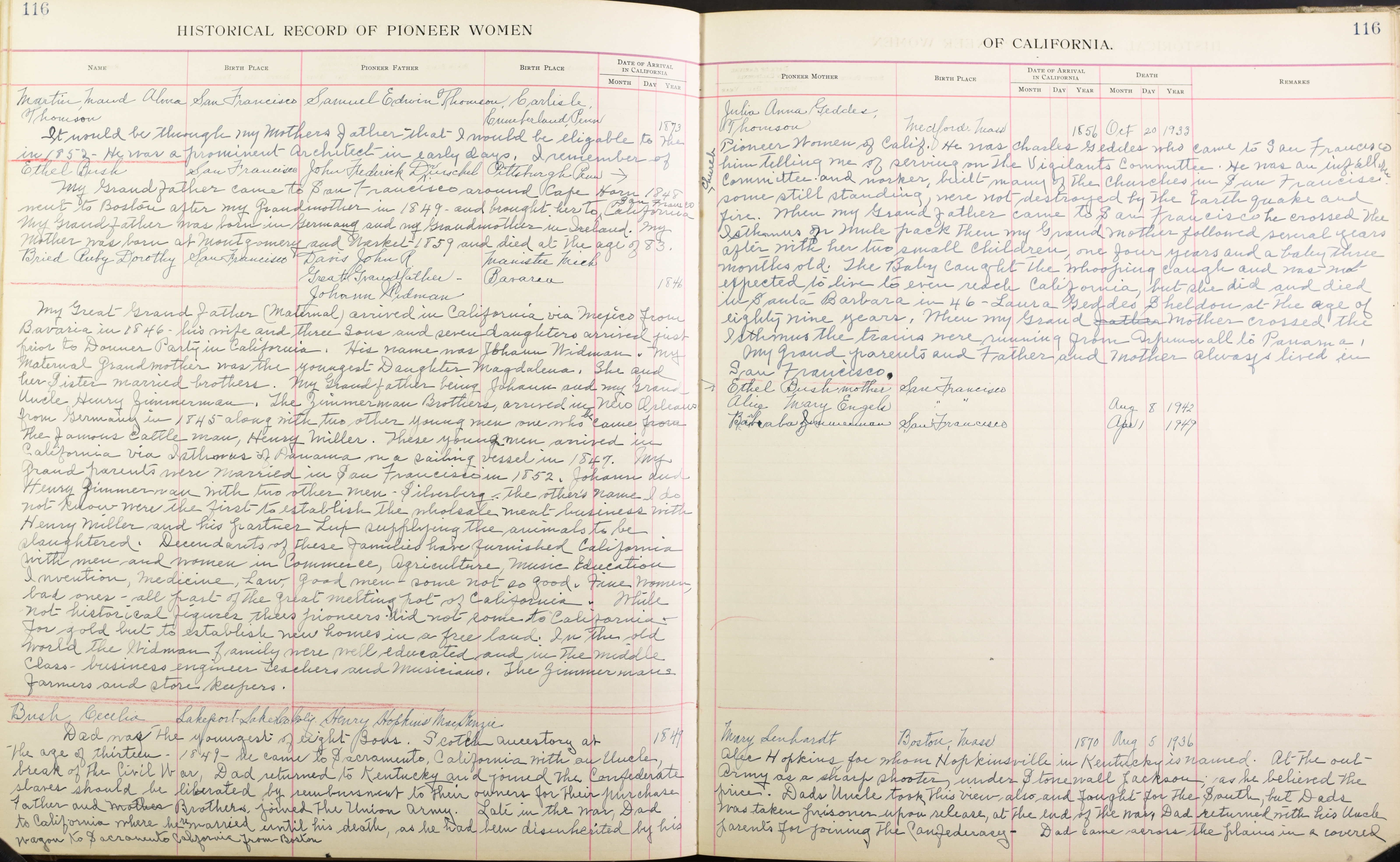 Remarks: It would be through my Mothers father that I would be eligable to the Pioneer Women of Calif. He was Charles Geddes who came to San Francisco in 1852 – He was a prominent Architect in early days. I remember of him telling me of serving on the Vigilantes Committee. He was an infallible Committee and worker, built many of the churches in San Francisco, some still standing, were not destroyed by the earthquake and fire. When my Grandfather came to San Francisco he crossed the Isthmus on mule pack then my Grandmother followed several years after with her two small children, one four years and a baby three month old. The Baby caught the whooping caugh and was not expected to live to even reach California, but she did and died in Santa Barbara in 46 – Laura Geddes Sheldon at the age of eighty-nine years. When my Grand Mother crossed the Isthmus the trains were running from [illegible] to Panama. My grand parents and Father and Mother always lived in San Francisco.

Remarks: My Great-Grandfather (Maternal) arrived in California via Mexico from Bavaria in 1846 – his wife and three sons and seven daughters arrived just prior to Donner Party in California. His name was Johan Widman. My Maternal grandmother was the youngest Daughter Magdalena. She and her Sister married brothers. My Grandfather being Johann and my Grand Uncle Henry Zimmerman, The Zimmerman Brothers, arrived in New Orleans from Germany in 1845 along with two other young men, one who became the famous cattle man, Henry Miller. These young men arrived in California vis Isthmus of Panama on a sailing vessel in 1847. My grand parents were married in San Francisco in 1852. Johann and Henry Zimmerman, with two other men – Silverberg, the other’s name I do not know – were the first to establish the wholesale meat-business with Henry Miller and his partner Lux supplying the animals to be slaughtered. Descendants of these families have furnished California with men and women in Commerce, agriculture, Music, Education, Invention, medicine, Law, good men – some not so good. Fine Women, bad ones – all part of the great melting pot of California. While not historical figures thees pioneers did not come to California for gold but to establish new homes in a free land. In the old world the Widman family were well educated and in the middle class – business, engineer, teachers, and musicians. The Zimmermans farmers and store keepers.

Remarks: Dad was the youngest of eight sons. Scotch ancestry. at the age of thirteen–1849–he came to Sacramento, California with an Uncle, Alec Hopkins for whom Hopkinsville in Kentucky is named. At the out break of the Civil War, Dad returned to Kentucky and joined the Confederate Army as a sharp shooter, under Stonewall Jackson, as he believed the slaves should be liberated by reimbursement to their owners for their purchase price. Dads Uncle took this view, also, and fought for the South, but Dads Father and Mother Brothers, joined the Union Army. Late in the war, Dad was taken prisoner. upon release, at the end of the war Dad returned with his Uncle to California where he remarried until his death, as he had been disinherited by his parents for joining the Confederacy. Dad came across the plains in a covered wagon to Sacramento, California from Boston.