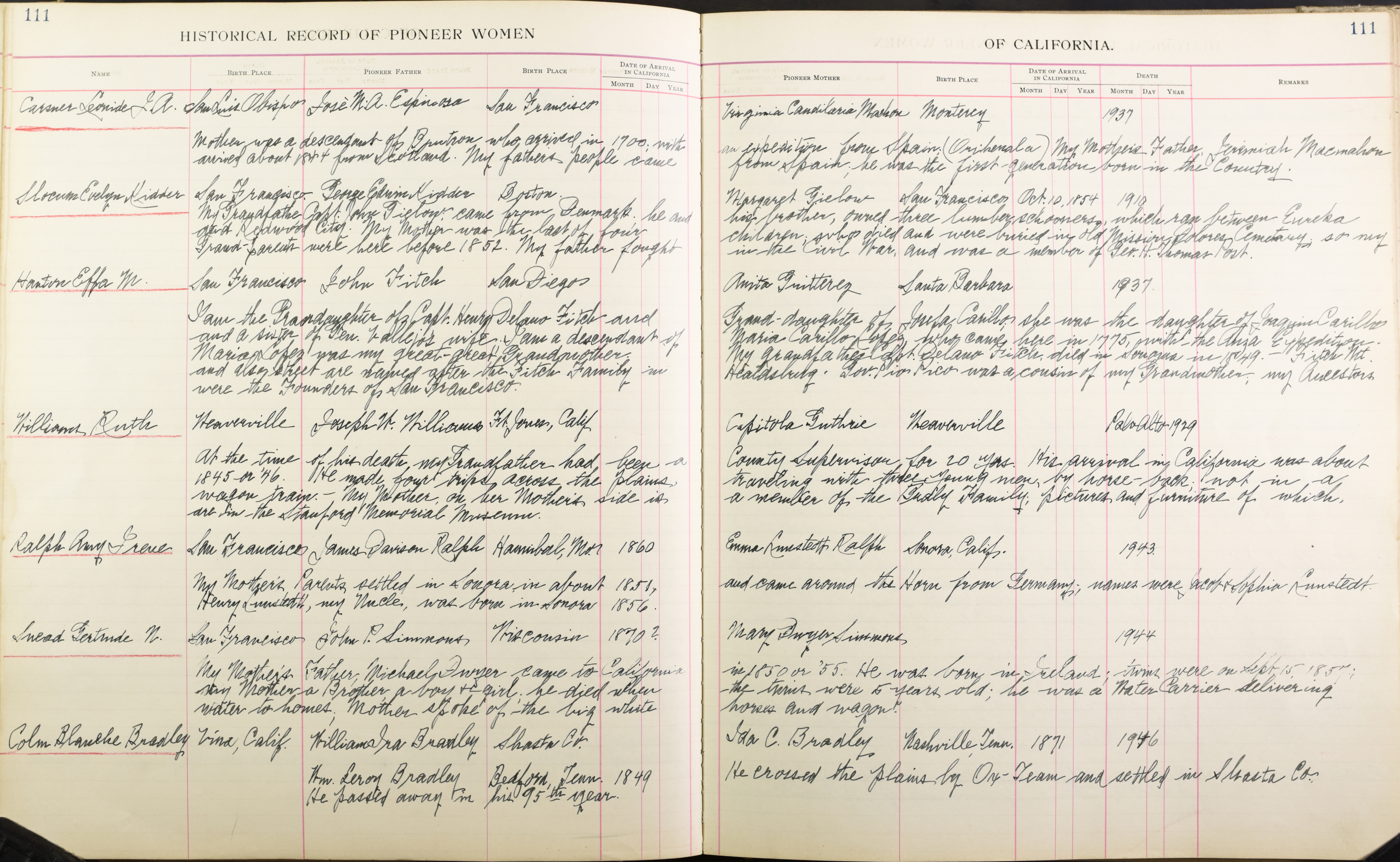 Remarks: Mother was a descendant of [illegible] who arrived in 1700; with an expedition from Spain; ([illegible]) My Mother’s Father, Jeremiah Macmahon arrived about 1844 from Scotland. My father’s people came from Spain; he was the first generation born in the Country.

Remarks: My Grandfather Capt. John Gielow came from Denmark; he and his brother owned three lumber schooners, which ran between Eureka and Redwood City. My Mother was the last of four children; who died and were buried in old Mission Dolores Cemetary; so my Grand-parents were here before 1852. My father fought in the CivilWar, and was a member of Geo. H. Thomas Post.

Remarks: I am the Grandaughter of Capt. Henry Delano Fitch and Grand-daughter of Josepha Carillo; she was the daughter of Joaquin Carillo and a sister of Gen. Vallejo’s wife. I am a descendant of Maria Carillo Lopez, who came here in 1775, with the Anza Expedition. Maria Lopez was my great-great Grandmother. My Grandfather Capt. Delano Fitch, died in Sonoma in 1849. – Fitch Mt. and also street are named after the Fitch Family in Healdsberg. Gov. Pio Pico was a cousin of my Grandmother; my Ancestors were the founders of San Francisco.

Remarks: At the time of his death my Grandfather had been a County supervisor for 20 yrs. His arrival in California was about 1845 or ’46. He made four trips across the plains, traveling with three young men, by horse-back; not in a wagon train. – My Mother, on her Mother’s side is a member of the Brdly Family; pictures and furniture of which, are in the Stanford Memorial Museum.

Remarks: My Mother’s Parents settled in Sonora in about 1851, and came around the Horn from Germany; names were Jacob and Sophia Lunstedt. Henry Lunstedt, my Uncle, was born in Sonora 1856.

Remarks: My Mother’s Father, Michael Dwyer came to California in 1850 or ’55. He was born in Ireland; twins were on Sept. 15, 1857; my Mother a Brother, a boy and girl; he died when the twins were 5 years old; he was a Water Carrier delivering water to homes; Mother spoke of the big white horses and wagon.

Remarks: He [Wm. Leroy Bradley] crossed the plains by Ox-Team and settled in Shasta Co. He passed away in his 95th year.