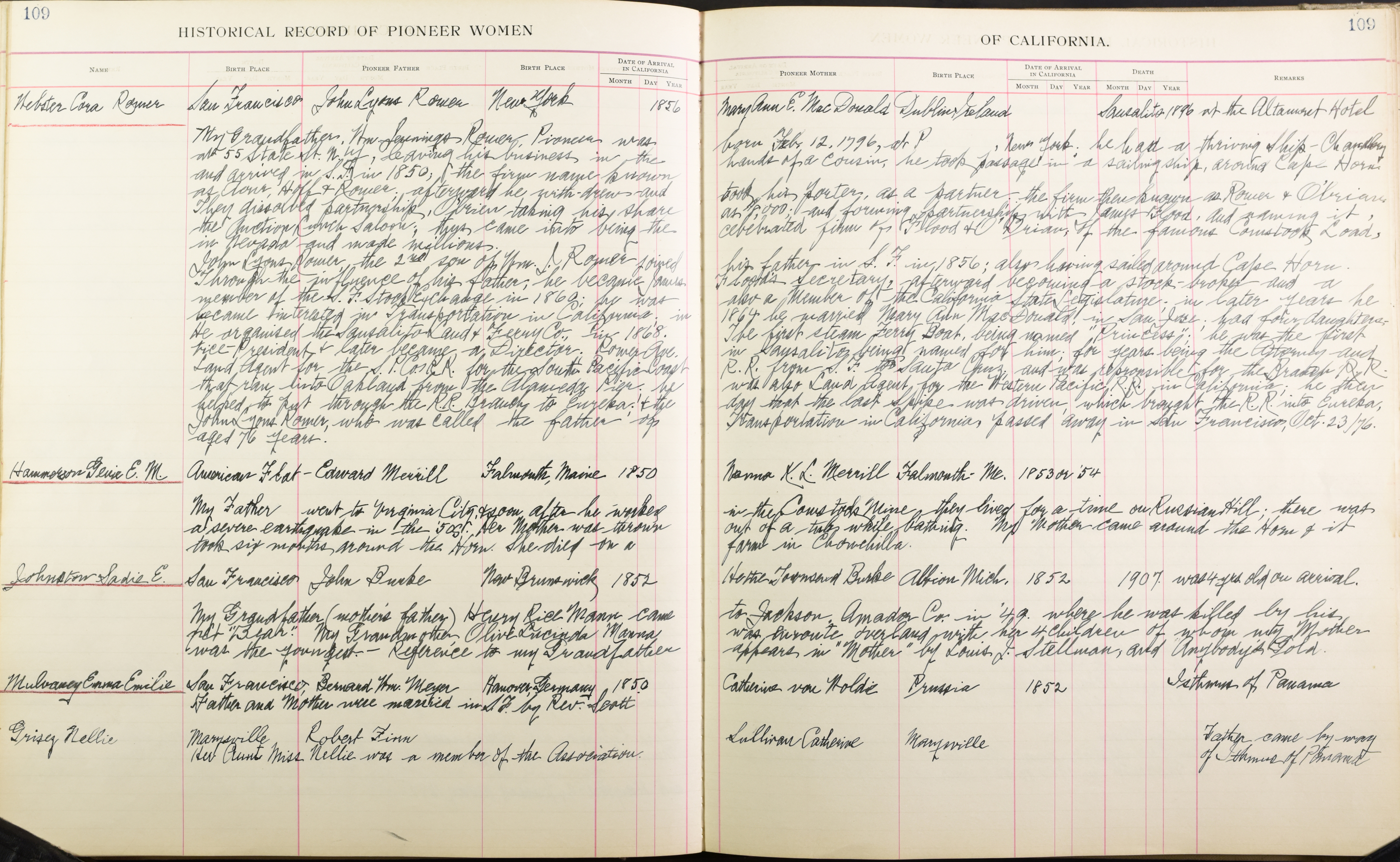 Remarks: My Grandfather, Wm. Jennings Rower, Pioneer was born Feb. 12, 1796, at P [blank space], New York; he had a thriving Ship-Chandlery at 55 State St. N.Y., leaving his business in the hands of a cousin, he took passage in a sailing ship, around Cape Horn and arrived in S.F. in 1850; the firm name known as [illegible], Hoff and Rower; afterward he with-drew and took his porter as a partner; the firm then known as Rower and O’Brian. They dissolved partnership, O’Brien taking his share as $8,000; and forming partnerships with James Flood, and naming it, the Auction Lunch Saloon; this came into being the celebrated firm of Flood and O’Brian; of the famous Comstock Load in Nevada and made millions.

John Lyons Rower, the 2nd son of Wm. J. Rower joined his father in S.F. in 1856; also having sailed around Cape Horn. Through the influence of his father, he became James Flood’s Secretary, afterward becoming a stock-broker and a member of the S.F. Stock Exchange in 1860; he was also a Member of the California State Legislature; in later years he became interested in Transportation in California; in 1864 he married Mary Ann MacDonald in San Jose; had four daughters. He organised the Sausalito Land and Ferry Co., in 1868. The first steam Ferry Boat, being name “Princess”; he was the first vice-President and later became a Director. Rower Ave. in Sausalito being named for him; for years being the Attorney and Land Agent for the S.P. Co. R.R. for the South Pacific Coast R.R. from S.F. to Santa Cruz.; and was responsible for the Brauer R.R. that ran into Oakland from the Alameda Pier; he was also Land Agent for the western Pacific R.R. in California; he then helped to put through the R.R. Brauer to Eureka; the day that the last Spike was driven, which brought the R.R. into Eureka, John Lyons Rower, who was called the father of Transportation in California, passed away in San Francisco, Oct. 23/76, aged 76 years.

Remarks: My Father went to Virginia City, and soon after he worked in the Comstock Mine, they lived for a time on Russian Hill; there was a severe earthquake in the 50’s. Her mother was thrown out of a tub while bathing. My mother came around the Horn and it took six months around the Horn. She died on a farm in Chowchilla.

Remarks: My Grandfather (mother’s father) Henry Rice Mann came to Jackson, Amador Co. in ’49, where he was killed by his pet “Bear.” My Grandmother, Olive Lucinda Manna was enroute overland with her 4 children of whom my Mother was the youngest. – Reference to my Grandfather appears in “Mother” by Louis J. Stellman, and “Anybody’s Gold”.

Remarks: Father came by way of Isthmus of Panama. Her Aunt Miss Nelliewas a member of the Association