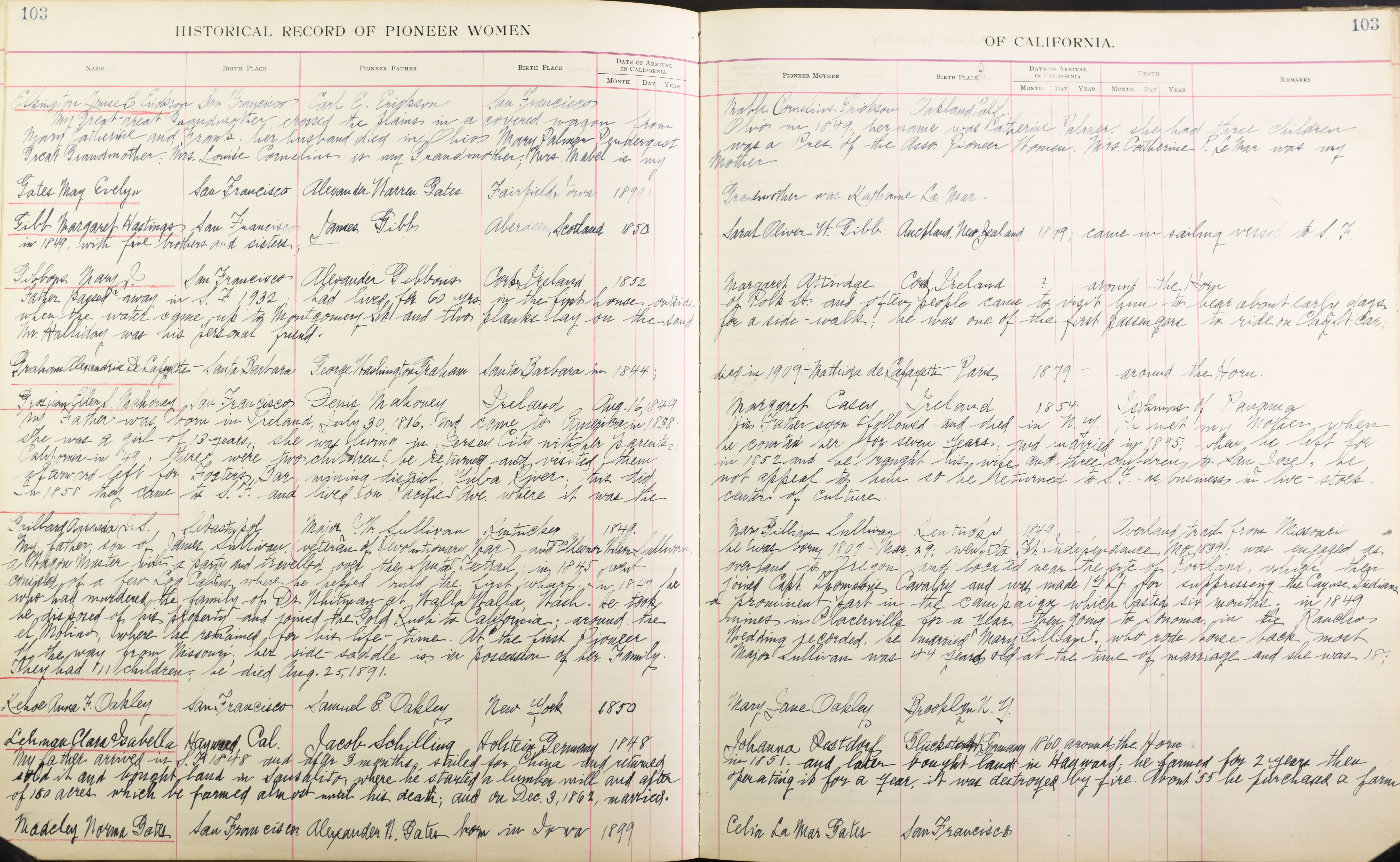 Remarks: My Great-great Grandmother crossed the plains in a covered wagon from Ohio in 1849. Her name was Catherine Palmer. She had three children Mary Catherine and Frank. Her husband died in Ohio. Mary Palmer Pendergast was a Pres. of the Asso. Pioneer Women. Miss Catherine P. Le Mar was my Great Grandmother; Miss Louise Cornelius is my Grandmother; Mrs. Mabel is my Mother.

Remarks: Came in sailing vessel to S.F. in 1849 with five brothers and sisters

Remarks: Father passed away in S.F. 1932; had lived for 60 years in the fips house outside of Polk St. and often people came to visit him to hear about early days, when the water came up to Montgomery St. and the planks lay on the sand for a side-walk; he was one of the first passengers to ride on Clay St. car; Mr. Halliday was his personal friend.

Remarks: My Father was born in Ireland, July 30, 1816, and came to America in 1838. His Father soon followed and died in N.Y. He met my Mother when she was a girl of 13 years; she was living in Carson City with her parents. He courted her for seven years and married in 1845; when he left for California in ’49, there were two children. He returned and visited them in 1852 and he brought his wife and three children to San Jose, he afterwards left for Foster’s Bar, mining district, Yuba River; this did not appeal to him so he returned to S.F. as business in live-stock. In 1858 they came to S.F. and lived on Pacific Ave. where it was the center of culture.

Remarks: My father, son of James Sullivan, (veteran of Revolutionary War) and Elleonor Wilson Sullivan; he was born 1801 – Mar 29; went to Ft. Independence , MO. 1839; was engaged as a Wagon Master with a party and travelled over the Santa Fe trail; in 1845 went overland to Oregon and located near the site of Portland, which then consisted of a few Log Cabins, where he helped build the first wharf. In 1847 joined Capt. Thompson’s Cavalry and was made 1stLt. for suppressing the Cayuse Indians who had murdered the family of Dr. Whitman at Walla Walla, Wash. He took a prominent part in the campaign which lasted six months. in 1849 he disposed of his property and joined the Gold Rush to California; around the mines in Placerville for a year, then going to Sonoma, in the Rancho el Molino, where he remained for his life-time. At the first Pioneer Wedding recorded, he married Mary Gillian, who rode horse-back most of the way from Missouri; her side saddle is in possession of her Family. Major Sullivan was 44 years old at the time of marriage and she was 18; They had 11 children; he died Aug. 25, 1891.

Remarks: My father arrived in S.F. 1848 and after 3 months, sailed for China and returned in 1851; and later bought land in Hayward; he farmed for 2 years then sold it and bought land in Sausalito, were he started a lumber mill and after operating it for a year, it was destroyed by fire. About ’55 he purchased a farm of 150 acres which he farmed almost until his death; and on Dec. 3, 1862, married.