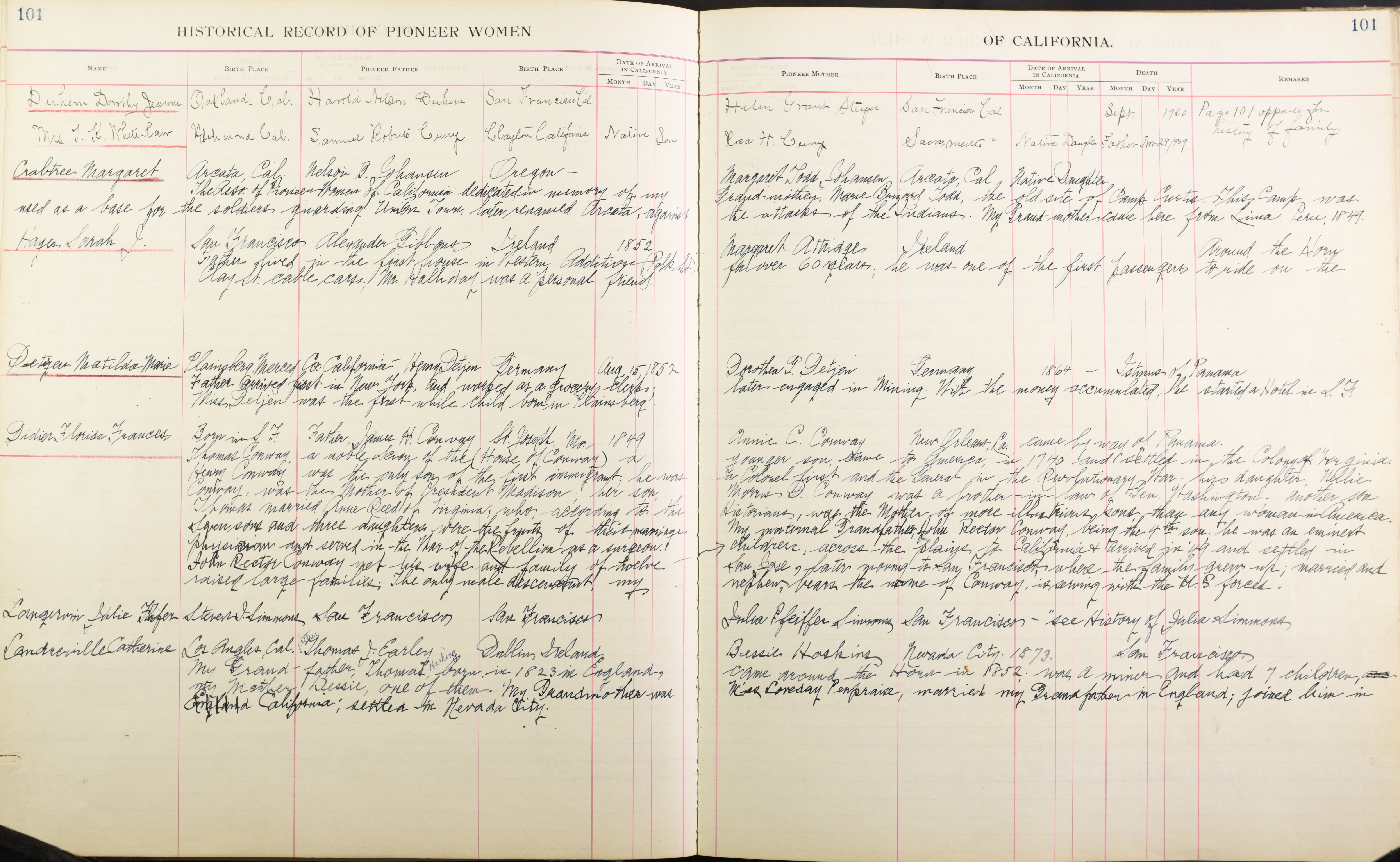 Remarks: Page 101 opposite for history of family.

Remarks: The Assn. of Pioneer Women of California dedicated in memory of my Grand-mother Marie Buzzard Todd, the old site of Camp Curtis. This Camp was used as a base for the soldiers guarding Union Town, later renamed Arcata, against the attacks of the Indians. My Grand-mother came here from Lima, Peru, 1849.

Remarks: Father lived in the first house in Western Addition (Polk St.) for over 60 years; he was one of the first passengers to ride on the Clay St. cable cars.  Mr. Halliday was a personal friend.

Remarks: Father arrived first in New York and worked as a grocery clear; later engaged in mining. With the money accumulated he started a Hotel in S.F. Miss Detjen was the first white child born in Plainsberg.

Remarks: Thomas Conway, a noble [illegible] of the (House of Conway), a younger son, came to America in 1740 and settled in the Colony of Virginia. Henry Conway was the only son of the first immigrant, he was a Colonel first and the General in the Revolutionary War. His daughter, Nellie Conway, was the mother of President Madison; her son Morris D. Conway was a brother-in-law of Gen. Washington; another son Thomas married Anne Reed of Virginia who, according to the Historians [sic], was the mother of more illustrious sons than any woman in America. Seven sons and three daughters were the fruits of their marriage. My maternal Grandfather John Rector Conway being the 4th son. He was an eminent physician who served in the War of the Rebellion as a surgeon. John Rector Conway met his wife and family of twelve children across the plains to California + [sic] arrived in ’49 and settled in San Jose, later moving to San Francisco where the family grew up; married and raised larger families. The only male descendent, my nephew, bears the name Conway, is serving with the U.S. forces.

Remarks: My Grand-father Thomas Haskins born in 1823 in England came around the Horn in 1852, was a miner and had 7 children. My mother Bessie, one of them. My Grandmother was Miss Coreday Penpraise, married my Grandfather in England; joined him in California, settled in Nevada City.