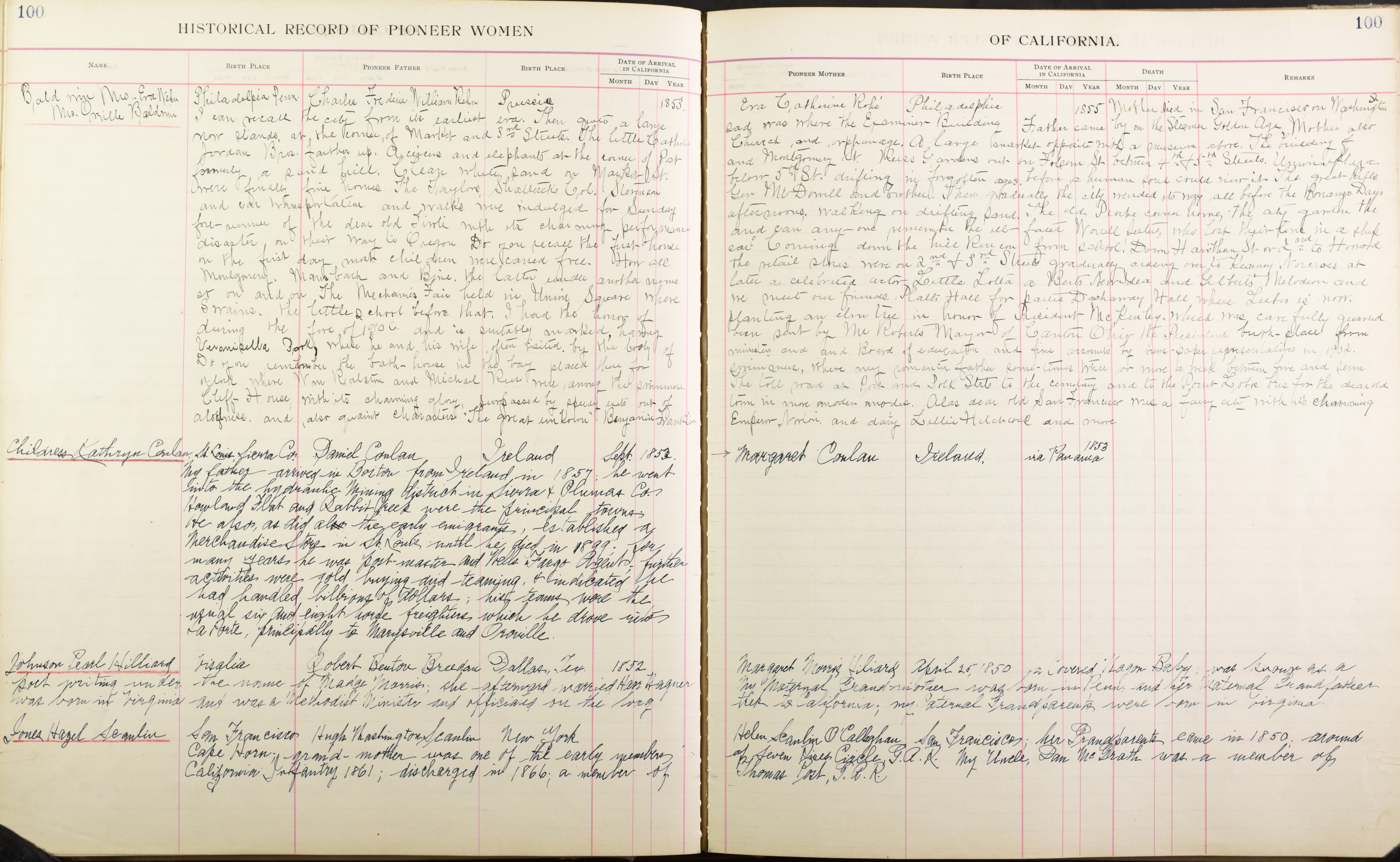 Remarks: I can recall the city from its earliest era. Then [illegible] a large [illegible] was where the Examiner Building now stands at the corner of Market and 3rdStreets. The little Catholic Church, and, orphanage, A large market with a museum above. The building of Jordan [illegible] farther up. A circus and elephants on the corner of Post and Montgomery St. Reiss Gardens out on Folsom St between 4thand 5th Streets. University a formerly a sand hill. Clean white sand on Market St. below 5th St. drifting in forgotten ages, before a human soul could view it. The great hills were finally fine homes. The Taylors, Shattucks, Col. Stevenson, Gen. McDarrell and brothers. Then gradually the city mended its way, all before the Bonanza Days and car transportation and walks were indulged for Sunday afternoons, walking on drifting sand. The old Perche corner home; the only [illegible], the only fore-runner of the dear old Tivoli with its charming performances and can any-one remember the ill-fated Norell Sisters, who lost their lives in a ship disaster on their way to Oregon? Do you recall the fish house cart? Coming down the hill Rincon from school? Down Hamilton St or 2nd to Howard on the first day most children were called free. How all the retail stores were on 2ndand 3rdStreets gradually crossing over to Kearney [illegible] at Montgomery. Mansbach and Bine, the latter under another name later a celebrated actor Little Lotta, a Berts [illegible] Melodeon and so on and on. The Mechanics Fair held in Union Square where we meet our friends, Platts Hall for partes, Dashaway Hall where Leefes is now. Swains, the little school before that. I had the honor of planting an elm tree in honor of President McKinley, which was carefully guarded during the fire of 1906, and is suitably marked, having been sent by Mr. Roberts Mayor of Canton Ohio the President’s birth-place from Vermisella Park, where he and his wife often visited. by the body of ministers and and Board of education and fine accounts by news-paper representations in 1902. Do you remember the bath-house in the bay placed there for swimmers, where my romantic father some-times twice or more a week between five and seven o’clock where [illegible] and Michael Rees were, among the swimmers. The toll road at Post and Polk Strts to the cemetary and to the Point Lobos bus for the dear old Cliff House, with its charming glory surpassed by speedy exits out of town in more modern modes. Alas dear old San Francisco was a fairy city with it’s charming aloofness. and, also quaint characters “The great unknown” Benjamin Franklin Emperor Norton, and dary Lillie Hitchcock and more.

Remarks: My father arrived in Boston from Ireland in 1857; he went into the hydraulic mining district in Sierra and Plumas Cos. Howland Flat and Rabbit Creek were the principal towns. He also, as did the early emigrants, established a Merchandise Store in St. Louis until he died in 1899; for many years he was post-master and Wells Fargo Agent; further activities were gold buying and teaming, and indicating he had handled billions of dollars, his teams were the usual six and eight were freighters, which he drove into La Porte, principally to Marysville and Oroville.

Remarks: her Grandparents came in 1850 around Cape Horn; grand-mother was one of the early members of Seven Pines Circle, G.A.R. My Uncle, Dan McGrath was on a member of California Infantry 1861; discharged in 1866; a member of Thomas Post, G.A.R.