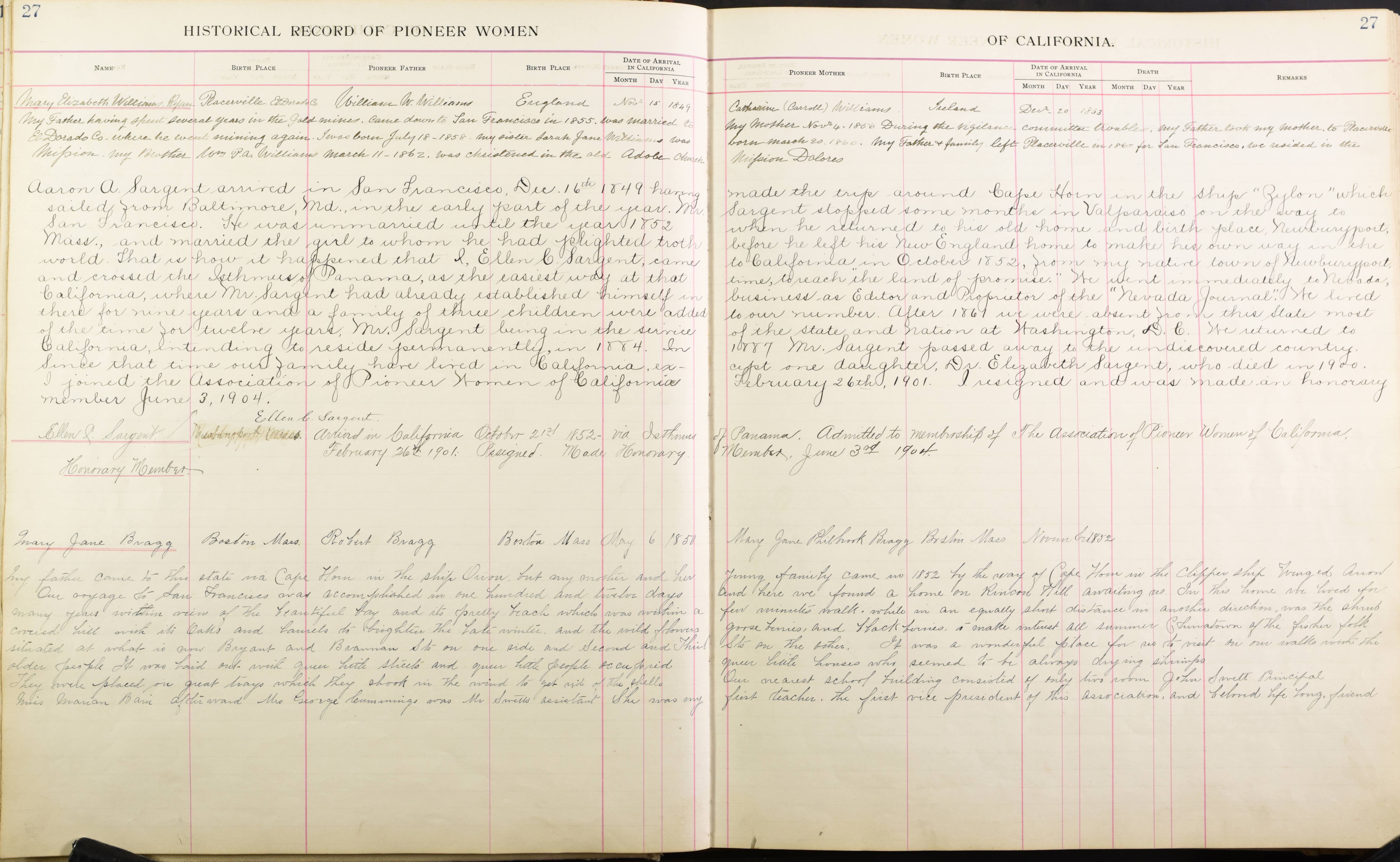 Remarks: My father, having spent several years in the gold mines, came down to San Francisco in 1855, was married to my mother Nov. 4, 1856. During the vigilance committee troubles, my father took my mother to Placerville, El Dorado Co. where he went mining again. I was born July 18th 1858. My sister Sarah Jane Williams was born March 20, 1860. My father and family left Placerville in 1860 for San Francisco. We resided in the Mission. My brother Wm P.A Williams March 11th 1862 was christened in the old Adobe church Mission Dolores.

Remarks: Arrived in California October 21, 1852 via Isthmus of Panama. Admitted to membership of the Association of Pioneer Women of California February 26th 1901. Resigned. Made Honorary Member June 3rd 1904.

Aaron A. Sargent arrived in San Francisco Dec. 16th 1849 having made the trip around Cape Horn in the ship “Zylon” which sailed from Baltimore, Md. in the early part of the year Mr. Sargent stopped some months in Valparaiso on the way to San Francisco. He was unmarried until the year 1852 when he returned to his old home and birthplace, Newburyport Mass., and married the girl to whom he had plighted troth before he left his New England home to make his own way in the world. That is how it happened that I, Ellen C. Sargent, came to California in October 1852, from my native town of Newburyport, and crossed the Isthmus of Panama, as the easiest way at that time, to reach “the land of promise.” He went immediately to Nevada, California where Mr. Sargent had already established himself in business as Editor and Proprietor of the “Nevada Journal.” He lived there for nine years and a family of three children were added to our number. After 1861 we were absent from this state most of the time for twelve years, Mr. Sargent, being in the service of the state and nation at Washington, D.C. We returned to California, intending to reside permanently, in 1884. In 1887 Mr. Sargent passed away to the undiscovered country. Since that time our family have lived in California, except one daughter, Dr. Elizabeth Sargent, who died in 1900. I joined the Association of Pioneer Women of California February 26th, 1901. I resigned and was made an honorary member June 3rd, 1904.

Remarks: My father came to this state via Cape Horn in the ship Orion, but my mother and her young family came in via 1852 by the way of Cape Horn in the clipper ship “Winged Arrow.” Our voyage to San Francisco was accomplished in one hundred and twelve days and here we found a home on Rincon Hill awaiting us. In this home we lived for many years within view of the beautiful bay and its pretty beach which was within a few minutes walk. While in an equally short distance in another direction, was the shrub covered hill with with its Oaks and laurels to brighten the late winter, and the wildflowers, gooseberries, and blackberries, to make interest all summer. Chinatown of the fisher folk was situated at what is now Bryant and Brannan Sts. on one side and Second and Third Sts on the other. It was a wonderful place for us to visit on our walks with the older people. It was laid out with queer little streets and queer little people occupied queer little houses who seemed to be always drying shrimps. They were placed on great trays which they shook in the wind to get rid of the shells. Our nearest school building consisted of only two rooms. John Swelt Principal Miss Manan Bain afterward Mrs. George Cummings was Mr. Swelt’s assistant. She was my first teacher. The first vice president of this association, and beloved life long, friend.