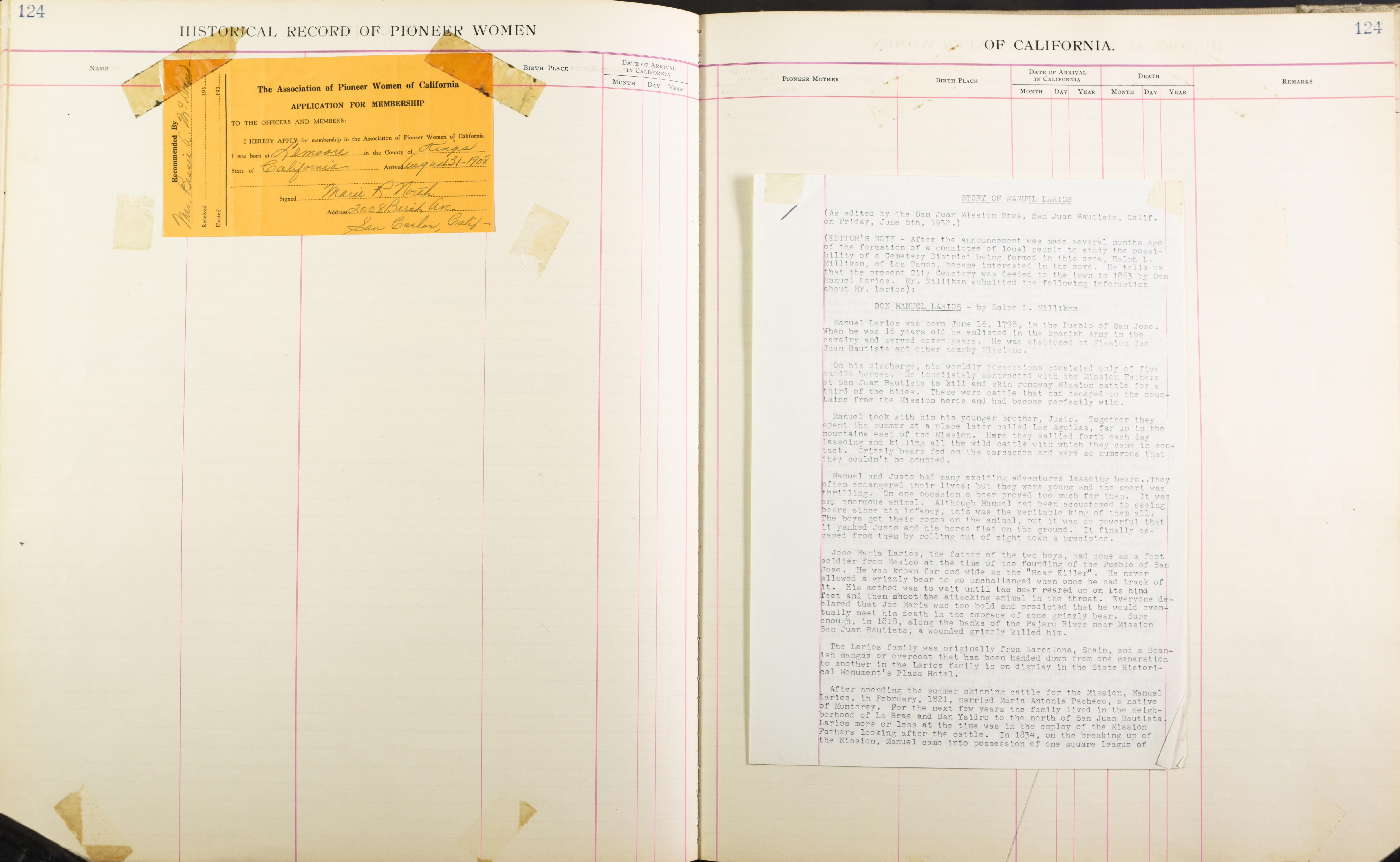 The Association of Pioneer Women of California

TO THE OFFICERS AND MEMBERS:

(EDITOR’S NOTE – After the announcement was made several months ago of the formation of a committee of local people to study the possibility of a Cemetery District being formed in this area, Ralph L. Milliken, of Los Banos, became interested in the move. He tells us that the present City Cemetery was deeded to the town in 1863 by Don Manuel Larios. Mr. Milliken submitted the following information about Mr. Larios):

Manuel Larios was born June 16, 1798, in the Pueblo of San Jose. When he was 16 years old he enlisted in the Spanish Army in the cavalry and served seven years. He was stationed at Mission San Juan Bautista and other nearby Missions.

On his discharge, his worldly possessions consisted only of five saddle horses. He immediately contracted with the Mission Fathers at San Juan Bautista to kill and skin runaway Mission cattle for a third of the hides. These were cattle that had escaped to the mountains from the Mission herds and had become perfectly wild.

Manuel took with him his younger brother, Justo. Together they spent the summer at a place later called Las Aguilas, far up in the mountains east of the Mission. Here they sallied forth each day lassoing and killing all the wild cattle with which they came in contact. Grizzly bears fed on the carcasses and were so numerous that they couldn’t be counted.

Manuel and Justo had many exciting adventures lassoing bears. . They often endangered their lives; but they were young and the sport was thrilling. On one occasion a bear proved too much for them. It was an enormous animal. Although Manuel had been accustomed to seeing bears since his infancy, this was the veritable king of them all. The boys got their ropes on the animal, but it was so powerful that it yanked Justo and his horse flat on the ground. It finally escaped from them by rolling out of sight down a precipice.

Jose Maria Larios, father of the two boys, had come as a foot soldier from Mexico at the time of the founding of the Pueblo of San Jose. He was known far and wide as the “Bear Killer”. He never allowed a grizzly bear to go unchallenged when once he had track of it. His method was to wait until the bear reared up on its hind feet and then shoot the attacking animal in the throat. Everyone declared that Joe Maria was too bold and predicted that he would eventually meet his death in the embrace of some grizzly bear. Sure enough, in 1818, along the banks of the Pajaro River near Mission San Juan Bautista, a wounded grizzly killed him.

The Larios family was originally from Barcelona, pain, and a Spanish mangas or overcoat that has been handed down from one generation to another in the Larios family is on display in the State Historical Monument’s Plaza Hotel.

After spending the summer skinning cattle for the Mission, Manuel Larios, in February, 1821, married Maria Antonio Pacheco, a native of Monterey. For the next few years the family lived in the neighborhood of La Brae and San Ysidro to the north of San Juan Bautista. Larios more or less at the time was in the employ of the Mission Fathers looking after the cattle. In 1834, on the breaking up of the Mission, Manuel came into possession of one square league of land, 4000 square acres, adjoining the Mission and known as the San Antonio Ranch.

In 1839, Manuel Larios and a neighboring rancher, Juan Miguel Anzar, owner of the Aromas Ranch – both being in need of more pasture for their growing herds of cattle – were given the Santa Ana y Quien Sabe Ranch of 11 square leagues. This grant as beyond the present town of Hollister and was four leagues east pf the Mission. Here Don Manuel lived with his ever-increasing family until 1855 in a two-story fortified adobe. Indian attacks were both numerous and fierce. But the Indians from the San Joaquin Valley were never able to capture this stronghold of Don Manuel. On more than one occasion, however, they stripped his adobe corral of all his saddle horses and feasted on the over in the Tulares.

Don Manuel all the while was growing in stature, both as a leader among Californians, and in worldly wealth. The San Antonio grant adjoining the Mission he now began calling the “Ranchito”, his “little ranch”, and it was so known until comparatively recent times. At the Santa Ana, Don Manuel developed a large hacienda. Besides shops for his blacksmithing, saddle making, weaving and soap making, he built and furnished a ranch chapel dedicated to Santa Ana, his patron saint.

Don Manuel, like most other California land owners, fared well from the “gold rush”. Cattle that had been only worth their hides and tallow now sold at the mines for $30 to $40 apiece. Don Manuel, with his two ranches and his large herd of cattle, suddenly found himself a very wealthy man. He enlarged his ranch house at the Ranchito to two stories and a score of rooms. Shortly thereafter he retired with his numerous family and dependants from the Santa Ana Ranch and spent the rest of his days in San Juan Bautista.

Bringing with him his Indians from the Santa Ana, Larios provided them all with houses of their own, or had them living as servants in his big two-story adobe. Every year on Santa Ana’s Day, July 26, he gave a fiesta for all his relatives and friends. Usually, for three days, bull fights in the arena beside the house went on during the daytime, while the nights were spent in the candle-lit Sala, or great hall of his home dancing to the music of guitars, flutes and violins. Guests from as far away as Monterey and Santa Cruz, together with the whole countryside around San Juan Bautista were in attendance. Don Manuel’s greatest pleasure was in seeing young people happy.

“Them days was nice”, as one old lady expressed herself in telling of her girlhood days.

By 1863, Don Manuel deeded a tract of land to the Baptist Church of San Juan Bautista for a Protestant Cemetery. This is now the public cemetery belonging to the people of San Juan.

The next year, 1864, Don Manuel deeded the adjoining tract of land to Bishop Amat. The cemetery at the Mission in use since 1797 was full to overflowing. The cemetery on the hillside is now the Catholic Cemetery of San Juan. A tiny corner adjoining was reserved for a burial place for members of the Larios family. It was here in the center of this tract of one-seventeenth of an acre, that Don Manuel was buried.

Senor Don Manuel Larios died December 11, 1865. His funeral was the greatest that the Mission town had ever known. Caskets were home-made in those days. There were no handles. Don Manuel’s casket rested on poles borne by six men walking three on a side. These were followed by six other pall bearers who took turns bearing the casket during the long walk from the Mission to the cemetery. The priest on foot led the procession. The mourners followed in couples, two by two, each person carrying a lighted candle. When the casket neared the cemetery, the end of the procession had not yet left the Mission.

Don Manuel was survived by his third wife and his family of nine living children. He was known to the Americans of San Juan Bautista as the “King of the Dons”. Among the Mexicans his word was law. His sway over his countrymen as their patron was absolute.

Don Manuel’s grave has remained unmarked for years, and it is at the wish of his youngest son, Estolano, who died some years ago, that a tombstone has recently been arranged to be erected to the memory of this outstanding Californian of a century ago.