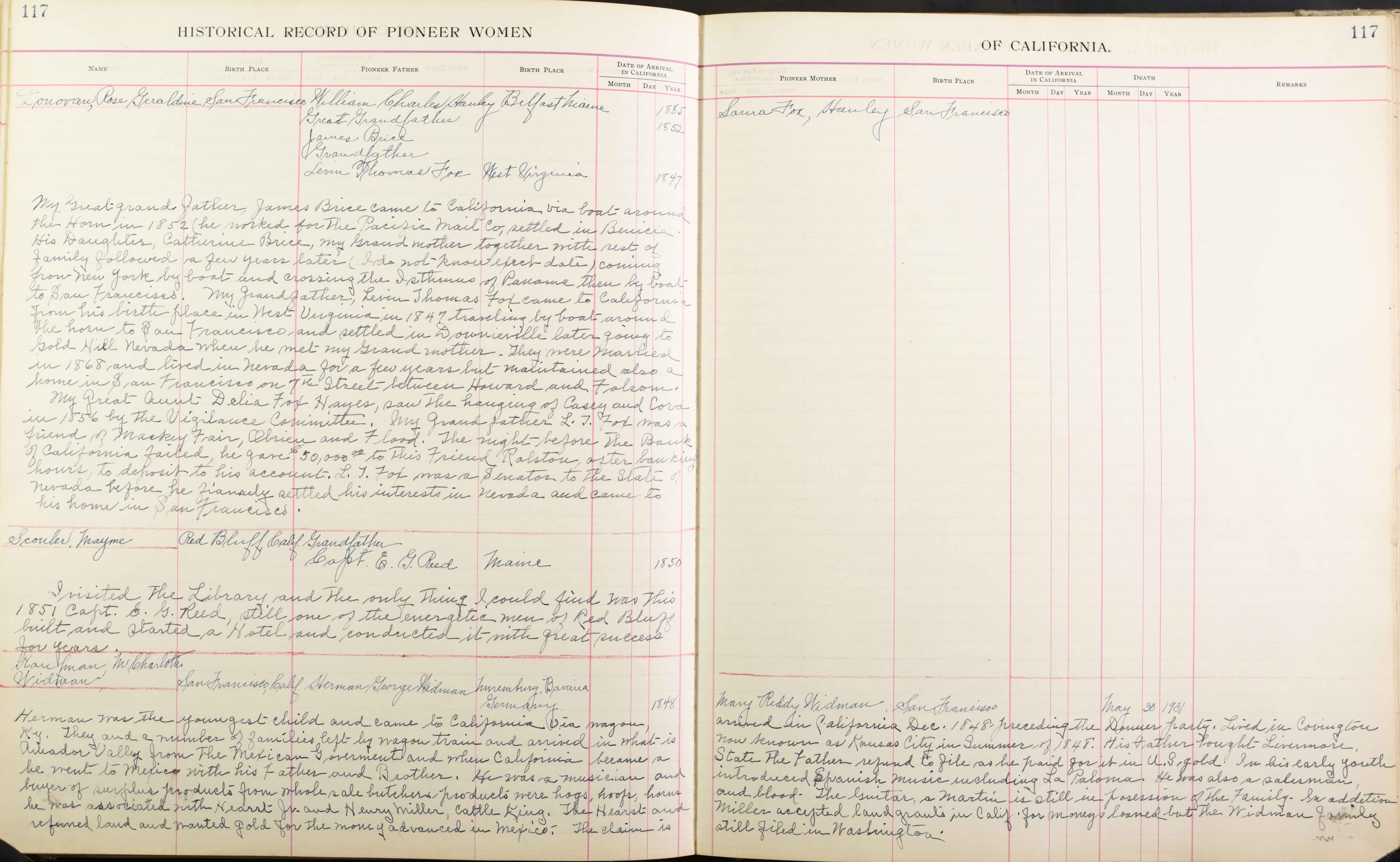 Remarks: My Great-grandfather, James Brice came to California via boat around the Horn in 1852 (he worked for the Pacific Mail Co, settled in Benicia. His Daughter, Catherine Brice, me Grandmother together with rest of family followed a few years later (I do not know exact date) coming from New York by boat and crossing the Isthmus of Panama then by boat to San Francisco. My grandfather, Levin Thomas Fox came to California from his little place in West Virginia in 1847, traveling by boat around the horn to San Francisco, and settled in Downiesville, later going to Gold Hill Nevada when he met my Grandmother. They were married in 1868, and lived in Nevada for a few years but maintained also a home in San Francisco on the Street between Howard and Folsom. My Great Aunt Delia Fox Hayes, saw the hanging of Casey and Cora in 1856 by the Vigilance Committee. My grandfather L. T. Fox was a friend of Mackey Frain, Obieu and Flood. The night before The Bank of California failed, he gave $50,000.00 to this friend Ralston, after banking hours, to deposit to his account. L. T. Fox was a Senator to the state of Nevada before he finally settled his interests in Nevada and came to his home in San Francisco.

Remarks: I visited the Library and the only thing I could find was this 1851 Capt. E. G. Reed, still one of the energetic men of Red Bluff, built and started a Hotel and conducted it with great success for years.

Remarks: Herman was the youngest child and came to California via wagon, arrived in California Dec. 1848, preceding the Donner party Lived in Covington KY. They and a number of families left by wagon train and arrived in what is now known as Kansas City in Summer of 1848. His father bought Livermore, Amador Valley from the Mexican Government and when California became a State the father refund to file, as he paid for it in U.S. gold. In his early youth he went to Mexico with his Father and Brother. He was a musician and introduced Spanish music including La Paloma. He was also a salesman, buyer of surplus products from wholesale butchers, products were hogs, hoofs, horns, and blood. The Guitar, a Martin is still in possession of the Family. In addition he was associated with Hearst Jr. and Henry Miller, Cattle King. The Hearst and Miller accepted land grants in Calif. For money loaned but the Widman family returned land and wanted gold for the money advanced in Mexico. The claim is still filed in Washington.