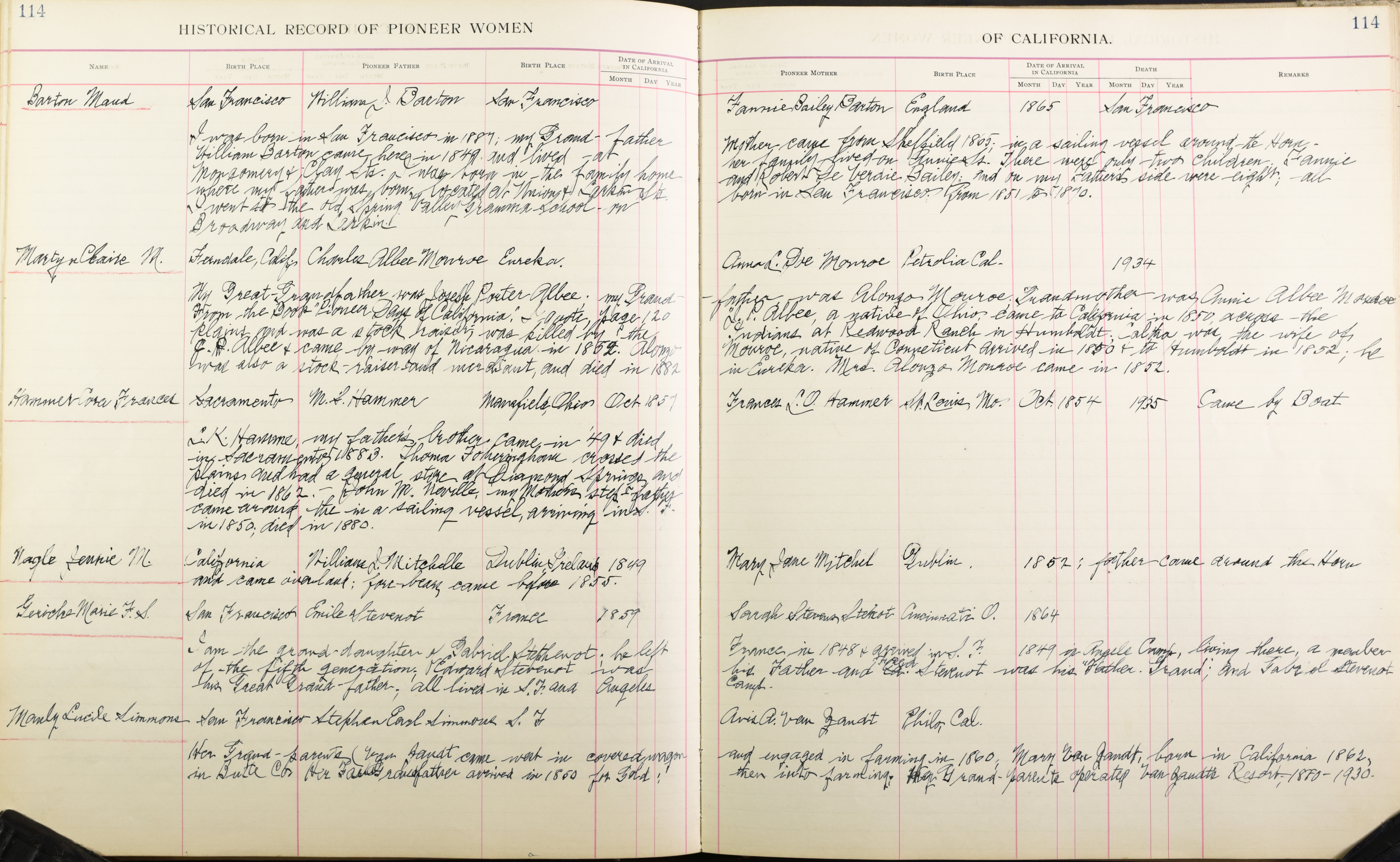 Remarks: I was born in San Francisco in 1887; my Grand-Father William Barton came here in 1849 and lived at Mongomery and Clay Sts. I was born in the family home where my father was born, located at Union and Larking Sts. I went to the old Spring Valley Grammar School on Broadway and Larkin.

Mother came from Sheffield 1865; in a sailing vessel around the Horn. Her family lived on Annie St. There were only two children; Fannie and Robert De Verdie Bailey; and on my Father’s side were eight; all born in San Francisco; Born 1851 to 1870.

Remarks: My Great-Grandfather was Joseph Porter Albee, my Grand-father was Alonzo Monroe; Grandmother was Annie Albee Monroe. From the book “Pioneer Days of California,” I quote page 120, “J. P. Albee, a native of Ohio, came to California in 1850, across the plains and was a stock raiser; was killed by the Indians at Redwood Ranch in Humboldt; [illegible] was the wife of J. P. Albee and came by way of Nicaragua in 1852. Alonzo Monroe, native of Conneticut arrived in 1850 and to Humboldt in 1852; he was also a stock-raiser and merchant, and died in 1882 in Eureka. Mrs. Alonzo Monroe came in 1852.

Thomas Foheringhorn crossed the plains and had a general store at Diamond Spring, and died in 1862. John M. Neville, my Mother’s stepfather, came around [illegible] in a sailing vessel, arriving in S.F. in 1850; died in 1880.

Remarks: father came around the Horn and came overland; fore-bears came before 1855.

Remarks: Her grand-parents (Van Zandt) came west in covered wagon ad engaged in farming in 1860; Mary Van Zandt, born in California 1862, in Butte Co. Her [illegible] Grandfather arrived in 1850 for Gold; then into farming. Her Grand-parents operated Van Zandt’s Ranch; 1880-1930.