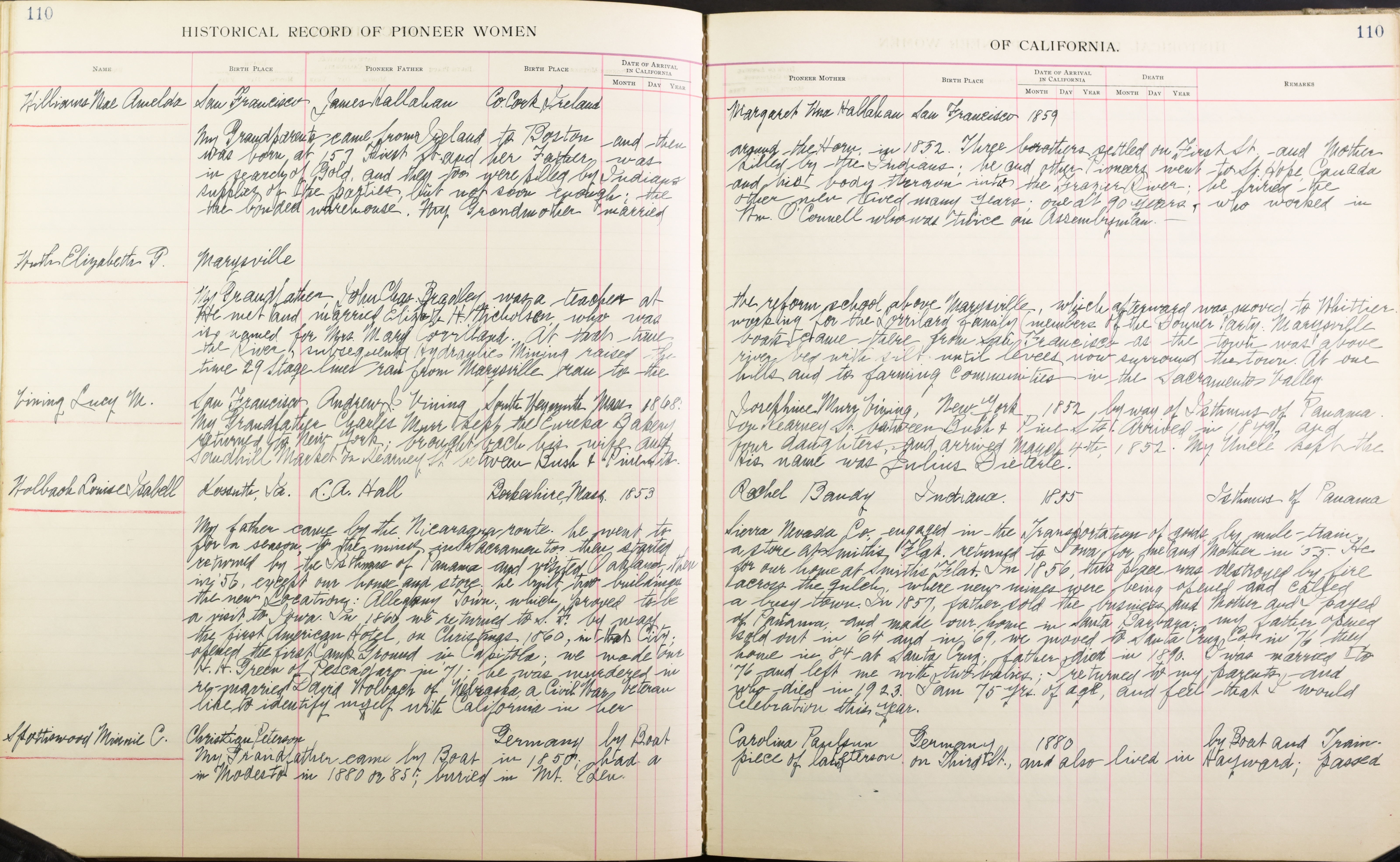 Remarks: My Grandparents came from Ireland to Boston and then around the Horn in 1852. Three brothers settled on First St. and Mother was born at 157 First St. and her father was killed by the Indians; he and other pioneers went to St. Hope, Canada in search of Gold, and they too were killed by Indians and his body thrown into the Franzier River; he buried the supplies of the parties, but not soon enough; the other men lived many years; one at 90 years, who worked in the bonded warehouse. My Grandmother married Wm. O’Connell who was twice an Assemblyman.

Remarks: My Grandfather, John Chas Bradley was a teacher at the reform school above Marysville, which afterward was moved to Whittier. He met and married Elizbeth H. Micholson, who was working for the Lorrilard family (members of the Donner Party. Marysville is named for Mrs. Mary Corrilland. At that time boats came there from San Francsico as the town was above the River, subsequently Hydraulic Mining raised the river bed with silt until levees now surround the town. At one time 29 Stage lines ran from Marysville ran to the hills and to farming communities in the Sacramento Valley.

My father came by the Nicaragua route. he went to Sierra Nevada Co., engaged in the transportation of goods by mule-team for a season, to the miners in Sacramento; there started a store at Smith’s Flat. returned to Iowa for me and Mother in ’55. He returned by the Isthmus of Panama and visited Oakland, then for our home at Smith’s Flat. In 1856, this place was destroyed by fire in ’56, except our house and store; he built two building across the gulch, where new mines were being opened and called the new Location: Allegany Town; which proved to be a busy town. In 1857, father sold the business and Mother and I payed a visit to Iowa. In 1860 we returned to S.F. by way of Panama, and made our home in Santa Barbara; my father opened the first American Hotel, on Christmas 1860, in that City; sold out in ’64 and in ’69, we moved to Santa Cruz Co.; in ’76 they opened the first Camp Ground in Capitola; we made our home in ’84 at Santa Cruz; father died in 1890. I was married to H. H. Green of Pescadero in ’71; he was murdered in ’76 and left me with two babies; returned to my parents and re-married David Wolbach of Nebraska, a Civil War Veteran who died in 1923. I am 75 years of age, and felt that I would like to identify myself with California in her Celebration this year.